The Kindness of Strangers By L.J. Trafford 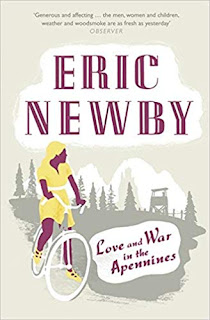 Autumn is upon us. The summer is over. And I find myself reflecting on my holidays and my holiday reading.
One of my holiday reads was Eric Newby’s book Love and War in the Apennines. This is a memoir set during the Second World War and concerns a subject I knew little about prior to reading: the fate of British POW’s in Italy at the time of the Italian armistice in 1943.

Eric Newby was one such prisoner of war when on 8th September the Italians surrendered.
The British Authorities ordered the POWs to stay put in their camps thinking that the allied advance would be rapid. However, it was not and the Germans issued an order that all POWs should be marched northwards. 50,000 Allied troops were marched to new camps in Germany and Poland where conditions were far harsher than they had experienced in the Italian camps. Thousands died either from failed escape attempts or the harsh winter conditions.

Eric Newby managed to escape this fate. At his camp they had ignored the British order and the POWs had walked out on mass, their Guards letting them go. Though free of their incarceration they faced a new danger: the Germans
They had issued a proclamation that made their intentions clear:


“It is hoped the population will have the good sense to abstain from all inconsiderate activities - all acts of resistance - all acts of sabotage - all hostile acts against German Armed Forces will be constrained by severe counter measures.”

With the Germans advancing Newby had to rely on the compassion and the help of the Italian civilians to avoid capture. A reward of 1,8000 Lira offered by the Germans per prisoner recaptured (around £4300 in modern terms) added to the danger faced by Newby and his fellow escapees.

But despite threats of execution for anyone caught harbouring escaped prisoners many of the Italian civilian population did offer help to those on the run. One Italian businessman Giuseppe Bacciagaluppi helped hundreds of British POWs escape to Switzerland. Bacciagaluppi was married to an English woman and with a home on the Italian/Switzerland border he was in prime position to help the escapees. He setup a network, with the aid of his factory staff, that helped the POWs cross over into Switzerland.
That Bacciagaluppi was betrayed by a colleague and arrested by the Gestapo in April 1944 shows the danger the Italian helpers were in. Indeed German proclamations stated clearly what anyone helping the loose POW’s might face.

4. Those giving refuge to Anglo-American escapees will be severely punished.


5. Anybody that gives food, supplies or civilian clothing to Anglo-American escapees will be referred to the War Tribunal for the application of severe penalties.


But help they did. As one RAF report said:


Iris Origo, an English biographer living in Italy during the war, recalls in her diary how four Englishmen were kept hidden by a Tuscan peasant:


“The peasant’s story is remarkable. He took in these four Englishmen at the beginning of October, when they were obliged to leave here, and fed and housed them –disregarding the danger as well as the expense – for over three months.”

She herself assisted many allied prisoners of war evade capture.

This was the experience of escaped British POW John Mallen:


“I found what I considered to be good hideaways - one was a cave in an area of dense woodland and the other was a barn. It was just bare ground in the cave and I had just one blanket that I had been given. As I was still in the area I could still contact my Italian family through another person. The next night after I had done this, the 11 year old daughter arrived in darkness, at my cave. 'Giovanni, I heard... Camilla' And there she was with a big basket strapped onto her back loaded with meat, cheese, bread, a bottle of wine and a big bunch of grapes. Dear oh dear.... that was very welcome. Just imagine though a young girl going a mile and a half in the dark and taking that risk.”


Newby himself evaded the Germans by hiding in the caves and forests of Fontanello in the Po Valley. He also experienced great kindness.


’No you can’t sleep in my hay," he said after another equally long pause. “You might set it on fire and where would I be then? But you can sleep in my house in a bed, and you will, too, but before we go in I have to finish with Bella." And he went back to milking her.

After injuring his ankle Newby was taken to the local hospital. Here he met a young Slovene nurse named Wanda. She gave him language lessons, a friendship formed. One which later became a romance.

But danger was ever present, as again John Mallen’s experience show:


“One early morning I was about to move off from my cowshed and I was looking around to see if anyone was around, any nasty people in German uniform, when I heard machine gun fire. The sound echoed round the valleys and it was hard to tell where it came from. Later I heard that a squad of Italian SS had tracked these Americans down to their hiding place. The sound I heard was them being shot. I was told by local people that it was the German SS.”

Newby had his own encounter with the enemy up in the hills:
“ I woke to find a German soldier standing over me.”

Thankfully though this German’s interest was primarily butterfly catching. He had no intention nor desire to hand Newby over to his commanders.

Staying in multiple households, sometimes sheltered by shepherds, Newby evaded capture for five months. However, his luck ran out when he was betrayed by a villager and arrested. He spent the remainder of the second world war in camps in Germany and Czechoslovakia. After the war he tracked down Wanda and they married.


I found this book an engrossing read and formed a great admiration of the courage of both the POWs and the Italians who risked all to help them.
Posted by LJ Trafford at 00:00

For such generosity and courage, there are no words, are there?

Good to see Eric Newby's book here, and recall the generosity of those helping him and all the others.

Newby was a remarkable man and he had a wide range of experiences in his life. His titles run from a youthful stint as a floor walker in a big, posh London department store all the way to sailing back to Britain on one of the last grain ships, as well as more of his wartime memoirs.

Have been meaning to read this for ages...