Funeral for A Virgin - Maidens Crowns

A Maiden's Crown
In the seventeenth century, the death of an unmarried young woman was commemorated by the making of an unusual wreath or garland. If you died unmarried, it was considered you were now married to God. So during the funeral procession a garland shaped like a crown, represnting the 'Crown of Glory' would be placed on the coffin or carried before it. The oldest surviving garland was made in 1680 and is displayed at St Mary's Church, in Beverley, Yorkshire. The one below is a drawing of one from Matlock in Derbyshire. 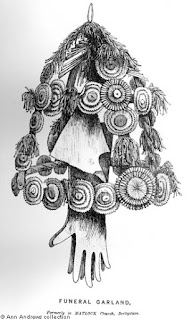 In the early days of Christianity, funeral garlands were emblems of Virgin Martyrs and the practice of making maidens' garlands is likely to have derived from that. The deceased, who in some parishes could be male or female, must have been both baptised and confirmed and have been unmarried before death. During the funeral procession, the funeral crown was suspended from a white rod and carried before the coffin by another young virgin dressed in white. It was common for the crown to hang above the deceased person's pew as a sort of test, for three weeks. If nobody challenged its right to remain, it was then hung permanently from a bracket in the church.

The garland was shaped as a crown, because you would be becoming the 'consort' of  Christ the King, it was a headdress like a wreath, shaped top form a high crown, made of wood and wrapped in white lace. Families would make these for their daughter because she would never have a wedding, and often they included ribbons, handkerchiefs and flowers, both fabric and real. In the spring, primroses were often included, and at other times when flowers were much less plentiful, fake flowers made of ruched paper or cloth were used. Many young girls died of chlorosis, sparking a legend that young unmarried girls who died from this anaemia – of which one sign was a yellow-green complexion – were turned into primroses.


Virgins, time past, known were these,Troubled with Green-sicknesses,Turn’d to flowers: stil the hieuSickly Girles, they beare of you.

According to Adkins History Website , their manufacture was described in a letter to the Gentleman’s Magazine of 1747 by a resident of Bromley in Kent:

‘The lower rim, or circlet, was a broad hoop of wood, whereunto were fix’d, at the sides thereof, part of two other hoops, crossing each other at the top at right angles, which formed the upper part, being about one third longer than the width; these hoops were wholly covered with artificial flowers of paper, dy’d horn, or silk, and more or less beauteous, according to the skill or ingenuity of the performer. In the vacancy of the inside, from the top, hung white paper, cut in the form of gloves, whereon was wrote the deceased’s name, age, etc. together with long slips of various-colour’d paper, or ribbons. These were many times intermix’d with gilded or painted empty shells of blown eggs, as farther ornaments; or, it may be, as emblems of the bubbles or bitterness of this life; whilst other garlands had only a solitary hour-glass hanging therein, as a more significant symbol of mortality.’

Gloves and crants
Traditionally the crowns also had gloves tied to them, because gloves symbolised the binding of hands, and the young woman was being 'married' to death and eternity. When the coffin was eventually lowered into the ground, the crown remained in the church, probably displayed over her pew, over her grave, or in the chancel – as a token of her purity and virginity and as a memorial.  Interestingly, the customm was not only for young women, as the pcture below shows, but for any unwed woman.
In the original version of Hamlet, at Ophelia’s burial, the crown or 'crant' is referred to. The word ‘crants’  is an old Dutch word for a garland or wreath, retained by the Saxons.

Yet here she is allowed her virgin crants, Her maiden strewments, and the bringing home
Of bell and burial.

Later editors substitute the word 'crants' with  'rites', making the lines easier to understand. Dr Johnson who was the first to explain the word crant,  revealed that the custom was still alive in his day. In earlier centuries it was considered unlucky to remove these garlands, or break bits from them, but as they decayed the fallen pieces were gathered up and buried in the church yard.

Very few of these garlands, crowns, or crants survive now - victims of over-zealous cleaning and tidying in churches, and possibly the uncertainty of finding a virgin! But some can still be seen as a poignant reminder, now yellowed with age. The church at Minsterley has the biggest number of seven surviving crowns. Six of them, dating from the first half of the 18th Century, can be seen displayed on the wall of the church. Each one hangs on its own wooden peg which juts from the wall and is finished off a wooden heart, on which are inscribed the maid’s initials and the date of her death. All of the surviving garlands date from the first half of the 18th Century.

The Minsterley garlands have recently been a focus of conservation, and one of them is displayed in a glass case, so vistors can get a close look, But it is a rather sad affair now, disintegrating and brown with age.

Most of my books include a death or two, but so far no virgin deaths. Such an interesting custom deserves to be immortalized in a novel, don't you agree?

Hi Celia, glad you enjoyed it.

Very interresting post. Thank you very much. I love learning about practices like this that help us learn about a significant aspect of the lives of women.

And these especially because they belong to a sub-class of women of whom not much is written.

Please correct me on that if there is a lot of information available about the lives of unmarried women. And direct me to any good sources.

I find that there is something beautiful and folorn about them. Their colour faded, hanging there,still in a row, they evoke for me the sadness their families must have felt.

A permanent reminder of both loss and hope in an eternal future.

Also
Given the damp climate in the uk and the fact that these are made mostly of thin strips of wood and paper, it's amazing any have survived.

That's fascinating! I'd never heard of this custom (nor did I know that 'green sickness' was an specific illness, I'd assumed it was just a general term for any illness affecting young girls)

I agree that there is something very forlorn and beautiful about these. Given that girls married very young in those days, they were probably mostly under twenty years old, but I also thought the one for an older spinster was particularly poignant.

Am very pleased to know the origin of 'virgin crants'!

I'd never heard of this practice at all. So fascinating. Thank you.

This is so sad. But after the Civil Wars there must have been many spinsters left to fend for themselves and their families. I'm glad their families found had a special way to honor them. And YES, this does deserve to be in a book!