One morning last week I went on a rather doleful shopping trip to Oxford Street. In the clothes departments shop assistants outnumbered customers and full racks of garments pleaded to be liked. As I walked through those designer mausoleums I remembered my childhood, when my shopaholic mother and grandmother took me on all day shopping trips . After an orgy of trying on clothes in bustling department stores these trips ended in the ground floor cafeteria in Selfridges with me, as a fat little girl, standing up to eat an enormous ice cream called a Knickerbocker Glory. Now that some people think that department stores will disappear from all our High Streets, it seems a good idea to remember their interesting pasts.

Towards the end of the 19th century Oxford Street changed from residential to retail. The first department stores were exciting and innovative. In Zola’s wonderful novel Au Bonheur des Dames (1883), a department store in Paris is the main character: a self contained world, a kind of paradise where women of all ages revel in colour and choice and sensuality. Not exactly a feminist message - but in fact, for middle class women, the arrival of department stores did represent a kind of independence. In mid-Victorian England it was not considered acceptable for a ‘respectable’ woman to go out unchaperoned whereas, a generation later, a shopping trip to a department store, where clothes, furnishings and lunch or tea could all be found under one roof, was allowed. 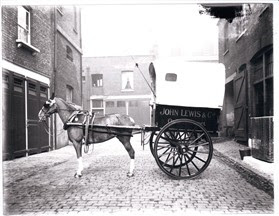 John Lewis was a buyer of silks for Peter Robinson, which has now disappeared. It was on the site at Oxford Circus where Topshop is now. He bravely set up his own draper’s shop at 132 Oxford Street in 1864. Over the next thirty years he expanded and when a court injunction banned him from extending his shop into Cavendish Square he defiantly spent three weeks in Brixton Jail. He eventually won and the stuffy residents of Cavendish Square had to put up with his enormous shop. His son, Spedan Lewis, was not a conventional businessman. As a young man Spedan had a serious accident when he fell from his horse whilst riding to work through Regents Park. He took two years to recuperate and seems to have thought hard about the unfairness of a world where he and his family took more money from the business than all the rest of their employees together. When Spedan eventually inherited both John Lewis and Peter Jones ( in Sloane Square) he spent decades setting up a trust, or Partnership, which transferred some of the benefits of ownership to his employees. 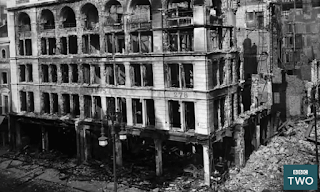 The original John Lewis shop was destroyed in the blitz and remained a bomb site until it was rebuilt in the late 1950s. The winged figure on the east wall is by Barbara Hepworth. Many other buildings nearby were damaged during the war. In 1941 George Orwell wrote in his diary that Oxford Street was "completely empty of traffic, and only a few pedestrians". He saw "innumerable fragments of broken glass."


Debenham, next door to John Lewis, started as a small drapery store on Wigmore Street in the 18th century, when Mary-le-bone was a village. The shop later grew and sold drapery, silks, haberdashery, millinery, hosiery, lace and family mourning goods.The latter involved a complex and expensive etiquette; after Prince Albert’s death in 1861 Queen Victoria wore her widow's weeds until she died in 1901. Many people felt obliged to follow her example and after a death entire households were expected to wear black. This sad photo shows a baby with black armbands. 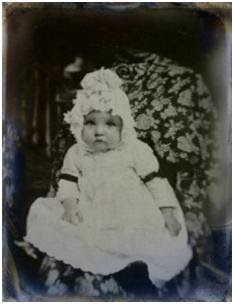 D H Evans, which my mother and her friends called D H Heavens, once stood where House of Fraser does now. In 1879 Dan Harries Evans, a farmer’s son from Llanelli, bought a small draper’s shop in Oxford Street. His wife did the dressmaking and other members of the family helped out. They specialized in fashionable lace goods and eventually,in the 1930s, their shop became a department store.

Selfridges has the most colourful history of all these department stores although not, perhaps, quite as lurid as the TV series Mr Selfridge. This photo of Selfridges under construction shows how many buildings were demolished in order to build it. Harry Gordon Selfridge was 51, and already very rich, when he opened his new emporium. He began his career a stockman in the warehouse of a Chicago department store and, 25 years later, was a junior partner. His wife, Rose, was a shrewd business woman and property developer.

On a visit to London he was shocked to see how old fashioned British shops were. His new building managed to be both modern and classical (In 2003 it was awarded a English Heritage plaque). There was a roof garden and new ornate window displays. A clock with an enormous figure called The Queen of Time still reigns over main entrance. Selfridge said his aim was "to make my shop a civic centre, where friends can meet and buying is only a secondary consideration." Could he be held responsible for introducing the consumer society? Some of his catchphrases were: “The customer is always right;” “Only [so many] Shopping Days Until Christmas,” and "I am prepared to sell anything from an airplane to a cigar".

In fact when the vast store did open, in 1909, the monoplane in which Louis Blériot flew across the Channel for the first time was on public display. Over the four days of the launch event about 150,000 people visited the store and 30 policemen were needed to hold back the crowds. For the first time cosmetics and perfumes were put on display at the front of the store. In other London stores make-up. which many people still disapproved of, was sold in side rooms or even in areas hidden by blinds.

The huge success of his new store made Selfridge more innovative - and more megalomanic. The 'Earl of Oxford Street' introduced a Bargain Basement to attract poorer customers. After the First World War he wanted to erect a massive tower (very Trumpian!) and a subway link to Bond Street Station, which was to be renamed “Selfridge’s". The book department expanded to become the biggest in the world. In 1925 the inventor John Logie Baird demonstrated the first television in the store and, later, the BBC transmitted live music broadcasts from the roof garden. There was a library, reading and writing rooms, reception rooms for French, German, American and "Colonial" customers, a First Aid Room and a Silence Room, with soft lights, deep chairs, and double glazing. Selfridge even - a most revolutionary idea then - installed toilets for women shoppers

During the Blitz Selfridge's windows were bricked up for safety. Although the roof was damaged by German bombs the shop continued to trade and the basement was converted into a communications base, with a dedicated line run along Oxford Street to Whitehall so that Churchill could make secure direct telephone calls to Roosevelt.

After his wife, Rose, died during the flu epidemic in 1918 Selfridge became wildly extravagant. He lost a lot of money gambling and had expensive affairs with (amongst others) the famous Dolly Sisters and Syrie Barnardo Wellcome, who later become Syrie Maugham. He entertained lavishly. both at his house in Mayfair and on his his yacht. In 1941, when he was 83, Selfridge was forced to resign because he was deeply in debt, and the apostrophe was removed from the department store's name.

So department stores were once great centres of urban life. Chaplin recognised this in his 1916 silent film The Floorwalker, in which the little tramp has fun with escalators and mirrors. 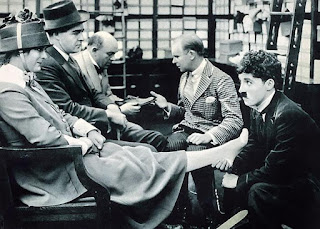 Fascinating! So much history - I hope they're not about to disappear. I still think it's good to be able to actually go and see things for real, and not just as a picture on a screen, before making a choice. I do buy quite a bit online, but only when I know exactly what I'm looking for.