Not giving a pig’s patootie: an interview with Laurie Graham on the pitfalls and pleasures of reviving old characters - Michelle Lovric

Every novelist has her own personal history, her cast of characters that stretch way back into her writing past. Laurie Graham, a former History Girl, never dreamed of writing sequels to her two early novels, Perfect Meringues and The Future Homemakers of America. She thought that those characters were in their graves: gone, but fondly remembered.

But in recent years, she’s been asked to pick up the stories of Lizzie Partridge the 1990s TV chef from Perfect Meringues and Peggy Dewey the 1950s Airforce wife in Homemakers. In each case she’s moved the characters on twenty years from their last appearance. 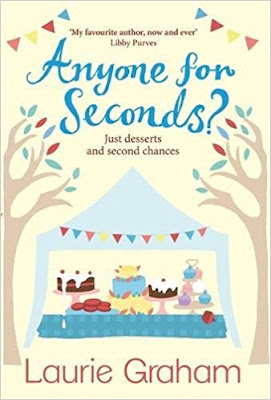 Writing this way raises particular problems, not least that Laurie hadn’t thought to future-proof Lizzy and Peggy. She was left with a desire to go back and rewrite the originals, to make better starting points for sequels. But it can’t be done. What’s published is published.

Another problem is being forced to re-read old work …

How does it feel to reread your old novels?

Initially it was so painful that I kept putting it off for tomorrow. I had to force myself to sit down and do it and indeed I was horrified by some of what I read. I couldn’t believe that my old editors had let certain things go through. But there was a good side to revisiting old material: I discovered that I’m a better writer now than I was twenty years ago.

I am more ruthless. I can now see in my early books instances of self-indulgence and sloppiness. With occasional downpours of clichés!

But all writers are desperately self-critical, aren’t they?

Not all, I fear. But we should be. Of course it’s a perennial tussle between having the confidence of your convictions while writing with the dreck-detector switched on.

I know that where twenty years ago it might have broken my heart to cut things that really needed to go, now I don’t hesitate. If the voice in my head says ‘really, Laurie? Sure about that, are you?,’ it goes, immediately. Stuff can always be retrieved from the cutting-room floor but funnily enough, it never is.

So the new Lizzy Partridge book is just out. It’s called Anyone for Seconds?, which is a double pun, in that it is a second helping of an earlier novel’s protagonist?

Yes. And I very much hope that no reviewer is going to say ‘No, thank you. We’ve had our fill of that.’

Tell us about the original Lizzie – and the new one.

What has been interesting for me is that when I created Lizzy I was going through a very difficult period of my life: divorce, single parenthood, penury. Quite coincidentally (or was it?), when reviving her, I was going through another difficult period: grief, loss, penury again. So Lizzie has been a sort of mouthpiece for me, the most autobiographical of my protagonists. In Perfect Meringues she was in her forties and the single parent of a stroppy teenager. In Anyone for Seconds she’s a grandmother, though not of the knitting and baking variety. She was sharp and funny then but she’s sharper and funnier now, having reached the golden years of not giving a pig’s patootie.

In Perfect Meringues she was a daytime TV cook who loses her slot to a one-recipe wonder who’s sleeping with the show’s editor. Lizzie bows out in the glorious blaze of an on-air food fight. When I dramatized the book for Radio 4 I had the great pleasure of scripting the fight for Imelda Staunton who played Lizzie and Lesley Joseph who played her nemesis, TV anchor Kim.

I was an enthusiastic cook myself in the 1990s so I enjoyed dreaming up menus for Lizzie. Wind on two decades and Lizzie, like me, rarely cooks. She’ll dine, as I have been known to do, on a slice toast eaten leaning over the sink. And her grungy, eye-rolling teenage daughter, has grown up, scrubbed up and become a career woman and a helicopter parent to her own son. Drawn from life? I name no names. Anyone for Seconds? is a work of fiction.
How did you work on this technically?

Having forced myself to sit at the kitchen table to read the first book, I was relieved to find that it wasn’t so very bad. It actually made me laugh a couple of times, which was encouraging. Most important of all, I still liked Lizzie and her entourage. I was happy at the prospect of spending another year in their company.

On that first reading, I foolishly didn’t make notes so during the writing of the sequel I had to keep going back to the old text. If only novels had indices.

My usual process with a novel is to wait for a voice but in this instance I already had the voice. What I needed to do next was a cull of characters. Who should reappear, who was for the chop? Lizzie’s mother, Muriel, now approaching 90, was a likely candidate for an early exit, but I found I couldn’t dispense with her. Muriel, just like my own dear departed Mum, is so key to understanding what drives Lizzie. So Muriel was spared and the guillotine fell elsewhere.

There’s always the question of a love interest. Lizzie had a happy romantic ending in Perfect Meringues, as did my own life about the time I was finishing writing the book. But ‘happy ever after’ often turns out to be ‘happy for the time being.’

I decided that should be Lizzie’s lot. Alone again, wiser, more resilient and, no longer actively looking for love as she was in her forties, she is, strange to relate, more likely to find it.

What are the main differences in society in the 20 years between the two books?

Only two decades and yet the world is hardly recognisable. When I wrote Perfect Meringues, I didn’t own a mobile phone. I just about had a computer, a beast which took up half of my small study. In the sequel, though Lizzie is way behind the technological curve even she has a mobile phone.

From the point of view of Lizzie’s character, political correctness is the most significant change in the world she inhabits. She, like me, finds it oppressive and at times risible, and she resists having her thoughts and speech policed by her vigilant daughter, Ellie. Each of them is a creature of their time. Ellie, born in the 1970s is as baffled by post-war baby Lizzie as Lizzie is by her own mother, born in the 1920s. 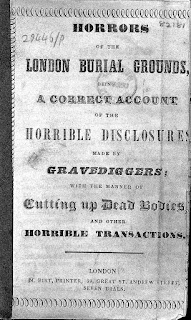 What was the hardest thing about reviving Lizzie?

This may sound odd but I think the thing that caused me most concern was how a sequel would be received. I didn’t want my readers to think I’d run out of new ideas. On the contrary, I still have plenty of ideas. Sadly my publishers haven’t been as enamoured of them as I am so they must lie dormant for the time being. I just didn’t want people to think I was scraping the authorial barrel. Let’s rather call it a bit of perfectly legitimate grave-robbing.

at left, The Horrors of the London burial grounds, being a correct account of the horrible disclosures made by gravediggers : with the manner of cutting up dead bodies, and other horrible transactions, 1840, courtesy of Wellcome Images

A really interesting read - thank you both!

A very interesting interview and I loved both books. Thank you.