I began writing this blog in Italy, in a cafe in the small Tuscan city of Sansepolcro. I was lucky it was still there. The Rough Guide to Tuscany  tells us that in 1944, the British Eighth Army was ordered to bombard the town but a young artillery officer recalled reading an article by Aldous Huxley which said that within its walls was ‘the greatest painting in the world’. The officer ordered the bombardment to be delayed hoping the Germans would withdraw, which they did and painting and city were saved. The story is part of the memory of the city. A man on a bicycle told us the same story when he realised we were English as we asked for directions to Piero della Francesca's house.


The painting was The Resurrection by Piero della Francesca. Recently restored, it occupies a wall in the Museo Civico and was painted in the early 1450s for the Palace of the Conservators, the town hall. The fresco has deep and profound religious significance but it was not painted for a church, or any kind of religious foundation. It served an arguably more important function, looking down on the deliberations of those who administered the city. Even today, it can be viewed by any citizen, day or night, either in the Museo, or after it closes, from outside through plate glass. It used to be visible from the street at all times but tour operators would bring their charges to view it for free instead of paying to enter the small museum. 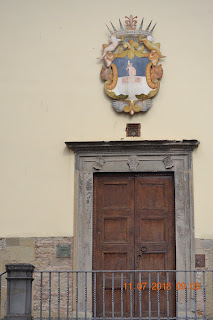 Sansepolcro was Piero Della Francesca’s ‘burgo’, his town, his city. He was born here and although he travelled throughout Italy to work for patrons and fulfil commissions, he was never longer than three years away from his home. He took an active and energetic part in civic life. He sat with the other Conservators under the unsettling gaze that he himself had created.

For the last fifteen years of his life, he never left Borgo San Sepolcro, recognised and celebrated by his fellow citizens as simply, the Maestro. The Resurrection is on the town shield and the city appears in many of his other frescoes. Sometimes, as part of a mysterious, distant landscape, sometimes in the foreground as the setting for the events that are depicted. No matter that the city is supposed to be Jerusalem, in the fresco cycle The Legend of The True Cross contained in the Basilica of St Francis in the nearby city of Arezzo, the city depicted is Sansepolcro. The River Jordan in The Baptism of Christ (in the National Gallery, London) is the Tiber, the landscape the Tiber Valley and the tiny city in the distance is  Sansepolcro.

Piero della Francesca left behind no self portraits, but it is thought that he put himself in two of his works and both are in the Museo Civico in Sansepolcro. He has been seen among the sleeping soldiers beneath the feet of the Risen Christ and under the sheltering cloak of the majestic Madonna della Misericorda, the Madonna of Mercy.


This study of the sleeping soldier shows another of Piero's obsessions, his fascination with form and perspective. In his youth he had trained as a mathematician and wrote several treatises on subject. His deep interest in the theoretical study of perspective is apparent in all his work, from the actual construction of his paintings, the landscapes and cityscapes which provide the backgrounds and the subjects themselves.


Piero della Francesca continues to be an inspiration. By one of those serendipitous holiday encounters, we were lucky enough to meet the artist Stefano Camaiti who lives a literal stone's throw from the front door of Piero's house. The house is now a small museum full of fascinating exhibits illustrating different aspects of Piero's life and work. Stefano's wife is the guide there but speaks little English. Her son, Giacomo, offered to translate and then took us to meet his father, Stefano, in his studio. With Giacomo translating, Stefano told us about his lifelong interest in Piero and showed us his own work. He was preparing for an exhibition to be held this September in Florence. The Places of the Rose would combine the artist's abiding interest in the works of Piero della Francesco, particularly the recurring motif of the dog rose, their shared love of the Tiberine Tuscan landscape and a series of works based on Dante's journey in the Divine Comedy. It was a rare privilege to be invited into his studio, to see his work and to hear him talk about it and I'm especially grateful to his son, Giacomo for his patient and able translation.

Love Piero della Francesca and the Resurrection in particular. How lucky you were to see all that.

What a wonderful description of your visit to Sansepolcro and Piero della Francesca and his paintings - as well as his sense of the civic life.

Now you explained it, I too feel sure that it is his mathematician's mind that gives his work that subtle feeling of strength and serenity, with humanity there in the faces and gestures.

How lovely to meet a contemporary artist, and to discover those links between him and the earlier one!