Sibylle Kreutzberger - a life in gardening, by Linda Newbery (guest) 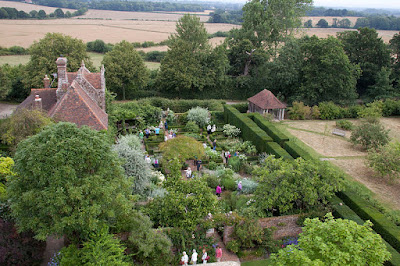 Mention Sissinghurst to anyone remotely interested in gardening and the name Vita Sackville-West will come to mind. Visitors admiring the White Garden, the Nuttery, the Lime Walk and other famous Sissinghurst features may not realise, though, how much this world-renowned garden owes to two other significant plantswomen, Sibylle Kreutzberger and Pamela Schwerdt, joint head gardeners there from 1959 to 1990.

The pair became friends while training at Waterperry Horticultural School in Oxfordshire towards the end of the war, under the tutorship of another notable woman gardener, Beatrix Havergal, who was principal there. Having done some gardening work at her boarding school, Sibylle had been thinking of enrolling for a horticultural diploma at Studley when a family friend enthused about Miss Havergal. Waterperry was not at that time open to the public, but Beatrix Havergal occasionally gave demonstrations on topics such as pruning and how to make the best of a kitchen garden. For Sibylle, one of the attractions was that the clothes list for the course included two pairs of gumboots and a mackintosh - not a cap and gown, as at Studley: “It sounded like my kind of place.”


In the late forties, with rationing still in force, growing fruit and vegetables at home was still important and the emphasis at Waterperry was on practicalities and produce, students there learning mainly through experience. Fruit and vegetables, as well as feeding the residents, were sold weekly at Oxford’s Covered Market. Fruit bushes and trees were sold in their thousands, packaged in straw and sent by road and rail. After completing her diploma, Sibylle stayed on, by request, for another eighteen months in the small scale vegetable department. After briefly working at Reading University in the Agricultural Botany department and then at an alpine nursery, she returned to Waterperry to do some lecturing to students and to run the Herbaceous Nursery.


By 1959, she and Pamela Schwerdt, who had stayed on as teacher during Sibylle's absence, were planning a project together. Feeling that life at Waterperry was “like being at school forever”, they aimed to establish their own nursery, but with no money or land their first challenge was to find a suitable and affordable site. They placed an advertisement in The Times personal column, asking if anyone might lease or lend them a plot of two acres or so. At the same time Pam wrote to Vita Sackville-West, who was at that time the Observer’s gardening correspondent. Vita replied suggesting that they try Wye College, in Kent, also mentioning that she needed a head gardener for Sissinghurst. Pam said firmly that there were two of them, and Vita invited them to visit.


As it wasn’t what they were looking for, Pam and Sibylle didn’t immediately jump at the chance; in fact Sibylle says now that she wasn’t sure who was interviewing who. But replies to their Times advertisement hadn’t produced any suitable offers, and they decided to accept. Vita, Sibylle says, was ‘rather tickled’ by the idea of employing two young women at a time when female gardeners were rare. Sibylle recalls that in those early days visitors would stare at them in astonishment.

They lived on site in a cottage opposite the oasthouses and worked immensely long hours, returning to the garden or to paperwork after their evening meal. The garden was labour-intensive, on heavy Wealden clay where all the digging and cultivation was done by hand; there were no machines other than mowers. Later, these were supplemented by a small tractor, electric sprayers and hedge-cutters. The appointment of Pam and Sibylle brought the number of gardeners up to six; as time went by these were generally college-trained, and among those beginning their careers at Sissinghurst were several who went on to become head gardeners at National Trust properties.


Pam and Sibylle rarely took days off, their weekends being taken up with glasshouse duties and displaying plants for sale outside the gate. For this they used a yellow cart painted with pictures of Sissinghurst, formerly pulled by the resident donkey, Abdul. Fish boxes, painted yellow to match the cart, were used as staging for a pyramid of plants arranged to tempt visitors.

At the time they took up their employment, Vita Sackville-West (known to Sibylle and Pam as Lady Nicholson) was 67, and in variable health. She was often in the tower room she used for writing: “even the family weren’t allowed in there.” Thursdays would be “Observer day”, when she would shut herself away to write her gardening column. It’s rather unfair, Sibylle considers, that Vita generally receives sole credit for Sissinghurst. In the early days her husband Harold was fully involved with the planning; though at home only at weekends he attended RHS shows in London, bought plants and contributed ideas. He and Vita wrote letters to each other every day to discuss progress and planting.

The garden had already been open to the public for twenty years, but in a low-key way – from dawn to dusk, visitors could put their shilling in an honesty box. Vita’s style of gardening was romantic and blowsy but not aimed at providing interest throughout the season, and like many gardens Sissinghurst’s main period of flowering was in late spring and early summer, with not much of interest after July. Among the changes made by Pam and Sibylle was the extension of interest well into late summer and autumn, through the use of later-flowering perennials not hardy in this country but treated here as annuals and biennials: diascias, argyranthemum, penstemons and tender salvias. Besides that, the ever-increasing numbers of visitors – especially after Vita’s death and the taking over of the garden by National Trust – imposed its own pressures. Paths were subject to heavy wear and lawns damaged by tramping feet. Measures taken included the placing of prickly plants at the junctions of paths, to deter visitors from cutting corners and walking on the beds.

But Sibylle and Pam were doing far more than simply maintaining the work done by Vita. Their dedication, flair and skill were rewarded by the Royal Horticultural Society in 1980 when they were made Associates of Honour, and in 2006 they were given the society's highest honour, the Victoria Medal. “I can’t think what we did to deserve it,” Sibylle says now. Others disagree. The designer, plantsman and writer Dan Pearson is among those who give them a large part of the credit for Sissinghurst’s enduring status as an iconic garden:

“When the National Trust took over in 1967, five years after Vita’s death, an inevitable tightening up eventually saw the garden reach extraordinary horticultural heights in the hands of Pam Schwerdt and Sibylle Kreutzberger who worked with Vita from 1959 until she died, but went on to make the garden their own during their 30 year tenure as joint head gardeners. Pam and Sibylle’s prowess with plants was a large part of what brought visitors to Sissinghurst in their droves in the 1970’s and ’80’s, securing its place as one of the most influential gardens in the world.” (Dig Delve, Dan Pearson’s weekly blog.)


In 1990 Pam and Sibylle left Sissinghurst to buy a home and make a garden of their own, settling near Stow-on-the-Wold in a new wing of a 17th century farmhouse with a three-quarter acre plot that had been a field. Pam died in 2009, and the house and garden were sold to appreciative new owners who welcome visitors under the National Gardens Scheme. Still fit and active at 87, Sibylle now lives in an Oxfordshire retirement village where most of the residents are unaware of her achievements and the high regard in which she’s held in the gardening world. They may, however, see her wielding a spade and fork in the community plot where she grows flowers and herbs.

The current head gardener at Sissinghurst, Troy Scott-Smith, has embarked with the National Trust – and Dan Pearson as consultant - on a project to revitalize (or reVita-lise) the garden from its present formality to something more like Vita’s vision. It is, Dan Pearson writes, “a means of recapturing the potent sense of place that Vita Sackville-West celebrated in her writing … a garden inextricably linked to the buildings it surrounded and, in turn, the Kentish farmland and countryside that swept up to its walls.” Sibylle was invited to an initial meeting, and as she’s the only person to have worked directly with Vita Sackville-West her contribution must have been invaluable.

When I asked Sibylle what had been most satisfying about her work at Sissinghurst, I expected her to refer to a particularly impressive planting or the opportunity to make her mark on a world-famous garden. Her reply was far simpler: 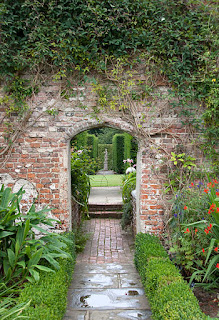 Linda Newbery is the author of  Set in Stone, The Shell House, Lob and many other titles. The Key to Flambards will be published in October.
Posted by Linda Newbery at 00:00

Thank you. I have been looking forward to reading your interview and suddenly here it is!

What remarkable women - so good that Sibylle is still gardening!