Elmet, King Arthur and me

I had my DNA done (by Living DNA), which neatly matched what I already knew about my ancestry from all the Ancestry.com family trees and my own research. In a nutshell, this is me: 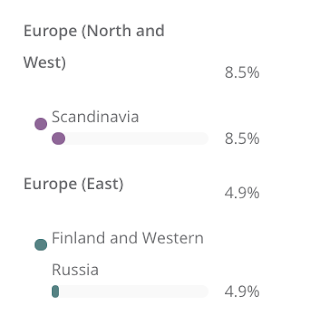 The Scandinavian/Finnish bit comes from my Swedish-Finnish Great-Grandfather. The rest roughly matches the English/Scottish background of my ancestors.

What was most interesting to me was the more than a quarter of my DNA that comes from the mysterious part of Yorkshire that was the ancient kingdom of Elmet. 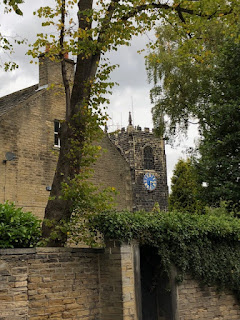 Only one of my grandparents - my mother's father - was born in England. Although his birthplace was Liverpool, both of his parents came from Almondbury near Huddersfield and his Eastwood/Wilkinson forebears seem to have lived in the Almondbury area ad infinitum.

Almondbury is now a suburb of Huddersfield, but when my ancestors lived there it was a village. Here are some photos of Almondbury I took yesterday. 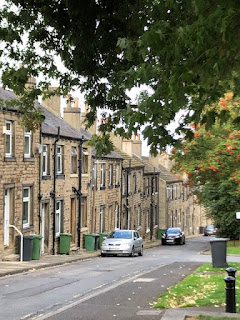 I had assumed the Yorkshire part of my genetic makeup would mean I had Anglo-Saxon or Viking DNA, because that's what we now associate with Yorkshire: Viking York (Yorvik) and Anglian Northumberland and Mercia. However, it seems I hail from a much older people, the original Celtic Britons.

South Yorkshire is sometimes jokingly referred to as "The People's Republic of South Yorkshire". It has form, as many large Chartist meetings were held on hilltops across the South and West Pennine moors, and there were bitter protests during the Thatcher years. They're a bolshie group in that part of the world, and proud of it. Now I understand why that's so and I'm really happy to share their DNA.

To quote my DNA report:

"The formation of South and West Yorkshire as a distinct genetic and cultural region has its roots in perhaps the most mysterious part of Britain’s history. As the Romans withdrew roughly 1500 years ago, the island was undergoing a great cultural and demographic shift. Waves of migration from Northern Europe saw Angles, Saxons, and Jutes setting up vast and powerful kingdoms, both displacing and integrating with the indigenous Britons. In certain areas, this transition happened quickly with little evidence of warfare, but some post-Roman rulers resisted.
The Kingdom of Elmet held out in England longer than most others, a buffer state in southern Yorkshire surrounded by expansive Anglian kingdoms. Though eventually it fell, remarkable evidence from the first fine scale genetic map of Britain shows that the ancient kingdom’s legacy is still felt today as a unique genetic signature can be found in an area almost perfectly matching its probable geopolitical boundaries." (my emphasis)

Living DNA refers to the portion of Yorkshire in red below as "South Yorkshire". 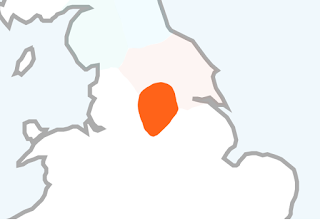 This is not entirely the area currently known as South Yorkshire, rather it lies within the old West Riding.

Basically, a quarter of my DNA comes from the people who made up this ancient kingdom of Elmet, which was an independent Celtic kingdom that existed between about the fifth century and early seventh century AD and was the last stronghold of the Britons to fall to the Anglo-Saxons in the seventh century. 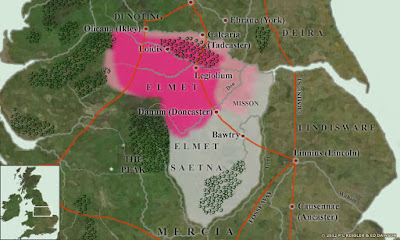 The boundaries of Elmet appear to have followed a rough line along the River Wharfe in the north-east, incorporating Ilkley to Tadcaster, and the River Don incorporating Doncaster and Sheffield in the south, up the side of the Peak District and taking in Sowerby Bridge Hallifax and Keighley.

The capital of Elmet seems to have been in or near to what is now Leeds, then Loidis. The name Elmet comes from that of the elm-tree, because it was located in a great forest of elm-trees.

It was known variously as Elmet, Elmed or Elfed, and the name may refer to its extensive forests of elms. The early chroniclers called it Elmete Saetan or "the dwelling place of the people of Elmete". 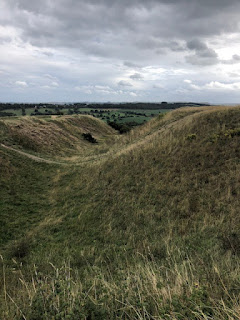 The people of Elmet were originally a part of the powerful Celtic tribe of Brigantes. In 155 AD the Brigantes revolted against Roman rule and burned down the Roman fort at Ilkley (Olicana). They were soon defeated.

Apparently the local Celtic British tribes centred around Leeds (Loidis) thought it wiser to be associated with the powerful Romans, who ound it convenient to rule through alliances with local chiefs. They separated from the Brigantes to form themselves into the separate kingdom of Elmet. They then forged an alliance with the Romans.

After the evacuation of the Roman Legions from Britain, around 407-410 AD, Elmet came into prominence as a Christian bulwark against the invading Anglo-Saxon pagans. And there is often an association of Elmet with the origins of Arthurian legends which speak of a warrior who led a band of heroic warriors to spearhead the resistance of Britons against the invading Saxons, Jutes, and others from the north of Europe, sometime in the fifth and sixth centuries AD.

It seems that Elmet had associations with the Welsh Celtic tribes. A two-line Latin inscription on an early Christian burial stone dating from the late fifth or sixth century was unearthed in a field known locally as the Gardd-y-Saint (the Garden of the Saints) near Llanaelhaearn church (about six miles north of Pwllheli) in north-west Wales. 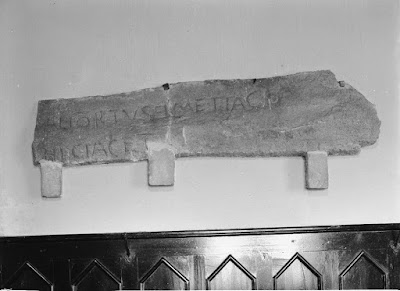 The  stone has been set into the wall of the church and it reads: 'ALIORTUS ELMETIACO HIC IACET', which means that "Aliortus, the man of Elmet" is buried there. (My husband's mother's maiden name was Allott and his mother came from Yorkshire. Perhaps Aliortus was an ancestor!)

Then came the Angles, Saxons and Jutes. In the sixth century, those Angles who were occupying territory to the east of Elmet (the East Riding) founded the kingdom of Deira, those to the north founded Bernicia, whilst the Angles of Mercia began to take over land to the south and in the Midlands. Elmet became a frontier land, ringed by the invaders. 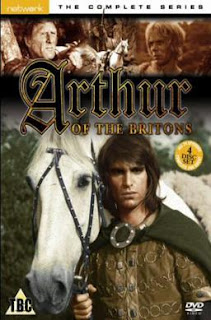 One of my favourite TV shows in the 1970s was Arthur of the Britons. It now seems that the real Arthur may have been from Elmet.

According to Grant, Arthur’s real name was Arthwys ap Masgwid (Arthur son of Masgwid), and he was the son of the king of Elmet, Masgwid Gloff and and his wife, Gwenllian V Bryche. 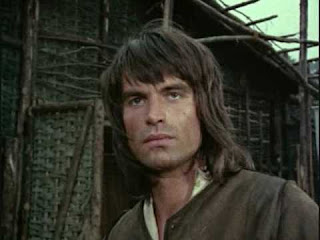 At the age of 15, says Grant, Arthur was chosen by the chiefs of the 'Hen Ogled' or 'Old North' - the kingdoms of northern England - as their Pendragon, or Commander-in- Chief and fought battles against the Scots, Picts and (probably) Saxons.

For a period Elmet was sufficiently powerful to withstand Anglian pressure, whether from Deira, Bernicia or Mercia. The poet Taliesin  wrote of Guallauc, a ruler of Elmet as "a skilled warrior," beloved of his followers.

Sadly, Elmet couldn't hold out forever against the expanding Anglo-Saxon kingdoms.  The kingdom's downfall began in 590 when its king, Gwallog, was killed during a war against the Angles of Bernicia.

Worse was to come for Elmet when in 616, Edwin, the king of Bernicia, merged his kingdom with its southern neighbour, Deira, to form the powerful Anglian kingdom of Northumbria. 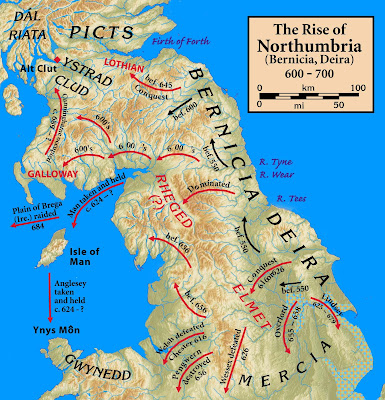 Elmet, the last of the Celtic kingdoms became the target of Edwin, king of Northumbria. His excuse for invasion came when an exiled Northumbrian nobleman named Herric (who had been given sanctuary in Elmet by its king, Ceredig) died of poisoning at the Elmet court. Some think that Hereric was poisoned on Edwin's orders, as an excuse to ipunish Ceredig for taking in Herreric by invading and annexing his country.

Although the kingdom of Elmet became part of Northumbria in 627, it seems that its population of Britons stayed put. According to a genetic study published in Nature (19 March 2015), the local population of what had been West Yorkshire is genetically distinct from the rest of the population of Yorkshire.

Later Anglo-Saxon and Viking names survive as Barwick-in-Elmet (berewic is Old English for 'corn farm'), Scholes-in-Elmet (the name is a plural of Old Norse skáli = "temporary shed") and Sherburn in Elmet, as if the locals were determined to maintain the memory of the fallen kingdom. The Angles who took over the area became known as the Elmed Saetna, or Elmet settlers, so the name was well enough established with the invaders to survive its demise as an independent kingdom. 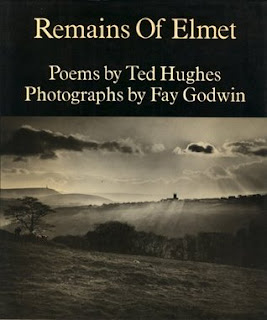 The ancient kingdom of Elmet held a particular fascination for the poet Ted Hughes, probably because he spent his early childhood in Mytholmroyd, near Hebden Bridge in West Yorkshire. He had a great love for the area.

With the photographer, Faye Godwin, he produced an "episodic autobiography" of the region, in which he examined the disconnection between the lives people live, the places they live and the history that surrounds them. The book was Remains of Elmet, first published in 1979, with an expanded edition, called just Elmet, in 1994. 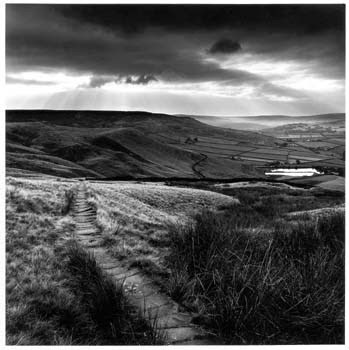 Hughes felt that the Anglo-Saxon usurpation of Elmet ("the last independent Celtic kingdom in England") was the first in a series of disasters to befall the area. His poems depict a weather-beaten landscape and people and the vestiges of industrial enterprise, religious custom and ancient tradition. He claimed that only nature now flourishes, as it reclaims the land from those who inhabit it.

I would love to get my DNA done to see how much of my ancestry was from outside of this area - allowing for my Scottish grandmother.

I enjoyed your blog. I have just had my own Living DNA done and it turns our I am 37% Elmet! For a long time I have described myself a "Son of Elmet". In 2015 a study found that some 19% of people with a heritage in the old kingdom of Elmet had Celtic DNA compared to 13% for the rest of Yorkshire.