The Wrong Caesar by L.J. Trafford 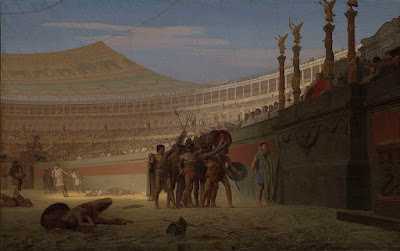 It's a grandiose painting, isn't it? A representation of the glory of Ancient Rome with a crowd of thousands. It was painted by Frenchman, Jean Leon Gerome and there is an intriguing mystery at the centre of it. One I felt compelled to dig into.


Painted in 1859 it depicts a gladiatorial contest. You can see the gladiators standing in front of the emperor’s box declaring:“Hail Caesar! We Who Are About to Die Salute You!”
The setting is the Colosseum, and the emperor we know, is Vitellius. If you enlarge the picture you will see his name inscribed on the emperor’s box.

Now I wrote a book about Vitellius (entitled Vitellius’ Feast and available at all good bookshops *end plug*) and so I know rather a lot about him. Most of this is filed away in a part of my brain entitled: things I know but sort of wish I didn’t. Vitellius is somewhat extreme.
But the Vitellius fact that popped up instantly when I saw this painting is that he died in December 69 AD. Which is odd, since they didn’t finish building the Colosseum until 80 AD.
This is the mystery at the heart of Gerome's painting: what is Vitellius doing there?

Instinctively you want to blame the painter. J.L. Gerome. He does not know his Roman history, does not know Rome. It's a sloppy work.
But is it? Let us take a closer look.


First up, there is no record of any gladiator saying the line, “Hail Caesar! We who are about to Die Salute you!” Possibly because they weren’t necessarily about to die. Though Ridley Scott and every other treatment of the topic would have you believe that the way to win a gladiatorial bout was to kill your opponent, this was not the case. The poet Martial writes about one of the very first gladiatorial contents in the Colosseum, between Priscus and Verus and it’s a draw – nobody dies:


"But an end to the even strife was found: equal they fought, equal they yielded. To both Titus sent wooden swords and to both palms. Thus valour and skill had their reward. This has happened under no prince but you, Titus: two fought and both won.”

Inscriptions to gladiators sometimes give the number of fights they took part in before being killed.
For example one to a gladiator named Glauco notes that he died during his 8th bout. But there are commemorations to those who had over 50 bouts to their name. Looking at inscriptions from Pompeii we can put together the results on 23 bouts: There were 21 winners, 17 who did not win but still survived and 8 who were killed during their bout.
So not nearly as bloody and final as the movies would have us believe.

It makes sense when you think about it. How are the crowd to have favourites if one gladiator had to die each bout? How would the gladiator trainers make any money if they were continually replacing their stock? How would gladiators themselves build up the skills and moves to be entertaining, if their lives were abominably short?

However, Gerome gets quite a lot right in this painting. Look at the scale of the Colosseum, the vastness. It was the first stone permanent amphitheatre in Rome. Before then the Games had been held in temporary wooden structures. It sat 50,000 spectators it was believed, far more than any amphitheatre anywhere else in the empire. 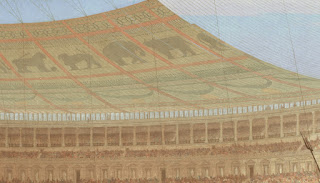 Also look at the awning over the top, we know from our sources that this was done to keep the hot sun off spectators.Famously in another amphitheatre the sadistically cruel emperor Caligula removed the awning on a particularly hot day and blocked the entrances so he could enjoy the spectators getting sun stroke and burning themselves red as a lobster (whatever gets you off....).
It’s a nice detail that awning, it proves that Gerome has read a bit of Suetonius most likely and other sources.

Let us look at the gladiators now, look at what they are wearing. The loin cloth/gladiator pant look with the heavy belt. 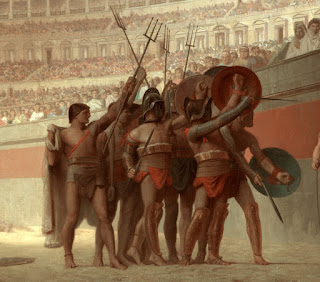 Now look at this mosaic of gladiators, from the Borghese gallery in Rome. The outfits are very similar; loin cloth/gladiator pants with a thick belt. I would bet that Gerome has seen this mosaic, or others very like it.

Have a look at the crowd and more particularly the figures in white to the left of Vitellius. These are the Vestal Virgins, priestess who tendered the sacred hearth of the goddess Vesta. Vesta was the goddess of the home and the family. Seating at the Games was heavily controlled along class lines. The emperor and the senatorial class sat at the front and thus got the best view. Behind them were the Equestrian class, followed by plebeian males. And then right at the back; women and slaves. Aside from the Imperial family, Vestals are the only women allowed to sit at the front. 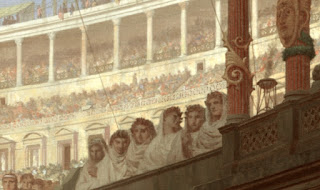 That Gerome gets this right, I would argue shows he does know a fair amount about ancient Rome. He has clearly done in-depth research in order to tackle this painting, he knows about seating orders and the awning and the gladiator outfits. He surely must know, therefore, that Vitellius never saw the Colosseum.
So let us ask that question again, why Vitellius?

Vitellius is a rather obscure emperor. He ruled for only 8 months during the tumultuous year of the four emperors. He did nothing, he achieved nothing of any note during that time. He is utterly superfluous to history, yet here he is depicted by Gerome watching over the gladiators.
Why?


Let us take a look at another of Gerome’s Roman painting, it is of a slave market. 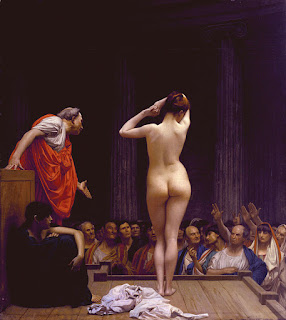 And here’s another one. 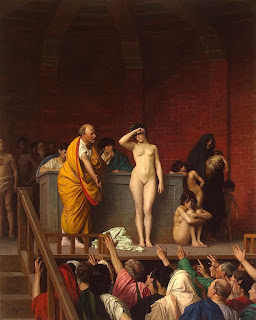 It is rather interesting that these Roman slave markets seem only to sell very beautiful, healthy, nubile young lady slaves.
My suspicion is that there’s a bit of Victorian morality seeping here, with gawking at naked lady slaves and watching men fighting to the death representing the very worst of Rome. A Rome of decadence and depravity and immorality. Which is where, I believe, Vitellius fits in.

When I wrote Vitellius' Feast I struggled to find any redeemable qualities in him. He is a truly horrible man and an awful emperor.
I'll let Suetonius fill you in:


"He delighted in inflicting death and torture on anyone whatsoever and for any cause whatever."


"He regulated the greater part of his rule wholly according to the advice and whims of the commonest of actors and chariot-drivers, and in particular of his freedman Asiaticus. This fellow had immoral relations with Vitellius in his youth, but later grew weary of him and ran away. When Vitellius came upon him at Puteoli, he put him in irons, but at once freed him again and made him his favourite. "

"He divided his feasts into three, sometimes into four a day, breakfast, luncheon, dinner, and a drinking bout; and he was readily able to do justice to all of them through his habit of taking emetics"


So in short: he's cruel, depraved and gluttonous. All the very worst of Rome to be represented alongside that very worst of Roman pursuits; watching men fight each other to the death.
That is why Gerome places Vitellius in the Colosseum when historically he could never have been there, is my theory.

Paintings
Hail Caesar! We who are about to die salute you is part of Yale University's Art Gallery.
A Roman Slave Market is housed at The Walters Art Museum in Baltimore.
Slave Market in Ancient Rome is part of the Hermitage museum, Russia.


Recommended Reading:
The Colosseum by Mary Beard and Keith Hopkins is a wonderful study of the Games and the Colosseum. They write about J.L. Gerome's other, very famous, gladiator study 'Thumbs Down'.
And also enjoyably crunch those gladiator deaths, bouts and how they could possibly have supplied quite so many exotic beasts for the arena.

L.J. Trafford is a writer of Roman things, including a short story in this new anthology of Roman fiction. Available here

Excellent post! And one that shows that tweaking the truth to sell an image is nothing new!