Cross Dressing and the Chevalier D'Eon by Imogen Robertson 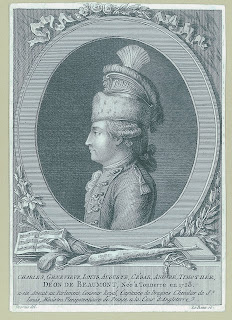 I haven’t had a chance to use him in a novel as yet, but I can’t let cross-dressing month go by without reminding everyone of the wondrous story of the Chevalier d’Eon whose gender was a national obsession in 18th century Europe and who remains, I reckon, one of the most fascinating mysteries of the time. Charles Geneviève Louis Auguste André Timothée d'Éon de Beaumont was born in Tonnerre in 1728 and having received a standard masculine education, became a bit of a star among the diplomats of Louis XV. He did particularly well in the Court of the Empress Elizabeth in Russia. He became a Captain of the Dragoons on his return to France and was wounded during the Seven Years War. 1762 saw him in London, but although he did well in his negotiations with the government here, he got into trouble with the French Court. He was eventually granted a pension by the French government (possibly to buy his silence over his spying activities) but continued to live in England.Where the rumours about his sex began, it is difficult to say. Kirkby’s Wonderful and Scientific Museum of 1820 suggests that he might have disguised himself by dressing in female clothing when he wanted to disappear from time to timeduring this period. Anyway, by the mid 1770’s large sums of money were being wagered on his gender. His attitude appears to have been one of ‘no comment’, but in 1777 one of these bets resulted in a court case in London. A Mr Hayes demanded payment of seven hundred pounds and produced witnesses who swore under oath that they knew for certain d’Eon was female. D’Eon did not take part in the trial, and swore that he himself stood to gain nothing from the bets placed. Then he returned to France and declared he was, in fact, a woman. Louis XVI said in that case he must dress and behave as one. D’Eon was at this point 49 years old. 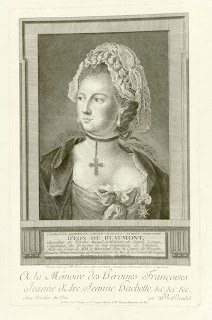 From that point until her death she dressed in female clothing. It was said that her father had been so disappointed on the birth of a daughter, he had decided to bring up Mademoiselle D’Eon, as she was now called, as a man. Plenty of stories circulated as to how she was finding behaving as a female difficult. She could not be properly modest, refused to wear rouge and curtsied ‘in the rustic fashion’.She came back to England in 1785 after getting into trouble with the French Court for trying to serve again in the army. Her finances seemed precarious, but she gave various exhibitions of her fencing skills including one against Chevalier Saint George (another star of the age) at Carlton House on April 9th 1787. 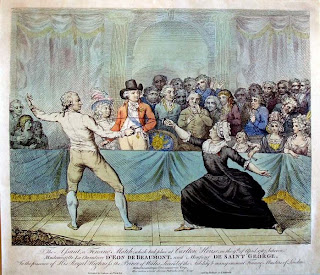 In 1792 having sold all of her goods in London she petitioned the French Assembly to be allowed to take up arms again, saying that although she had now worn the dress of a woman for fifteen years she had never forgotten that she was formerly a soldier, and she demanded instead of her cap and petticoats, her helmet, her sabre and her horse. ‘I have been the sport of nature, of fortune, of war and peace, of men and women, of the malice and intrigue of courts. I have passed successively from the state of a girl to that of a boy from the state of a man to that of a woman. I have experienced all the odd vicissitudes of human life. Soon I hope with arras in my hands, I shall fly on the wings of liberty and victory to fight and die for the nation the law and the king.’
The petition was warmly applauded, but applause was all Mademoiselle received.
She died in poverty in London in 1811 having been cared for in the last years of her life by a widow called Mrs Cole… and the morning after her death was found to have been a man after all.
A number of surgeons were called and Mr Kirby reports the following statement was circulated:

So why did he dress as a woman? Kirkby believes it is because he stood to make money from the bets on his sex. Perhaps, but for 33 years? Transvestite? Transgendered? I wonder if it might be that during his years in Russia he learnt that he rather liked dressing as a woman. The Empress held regular cross-dressing balls and apparently looked very good in male costume. You can see what is very probably a portrait of her in male dress by following this link. The article is fascinating too. I don’t think anyone has the answer, but the reactions to the Chevalier at all stages of his life shed a fantastical light on gender attitudes in the 18th century, just as the glittering reflections from the chandelier in the Empress’s ballroom over the splendid transvestite costumes of her guests.
Oh, and on a totally unrelated note, (coughs and looks at shoes), I’m delighted to say my latest book, Island of Bones has been short listed for the CWA Ellis Peters Award. Fingers crossed.
Posted by Imogen at 00:01

Fascinating story, Imogen. It sounds more like 'transgendered' to me, but I guess we'll never know.
Thank you for posting - and CONGRATULATIONS on the short-list! Everything is now firmly crossed.

What an intriguing story! Congratulations on the short listing.

Congratulations on the short listing. Loved the story. If medical science had been more advanced it wouldn't have been nearly so interesting. Quick dash down to the GP and problem solved.

I remember coming across the Chevalier d'Eon myself when undertaking some 18th-century research and failing to find an excuse to use him. I agree, this is truly fascinating stuff - and what a great drama could be made of his life. I love the idea of him/her being immodest and trying to get back into the army. Many congratulations for the shortlisting - and good luck!

I also came across the Chevalier when reseaching events that took place in Bath for The Girl in the Mask. However, the Chevalier came to Bath to give fencing displays later than my story was set, so I couln't use him either. Great story, though rather sad.

Congratulations on your shortlisting!
And what a fabulous story. This has to be the ultimate in cross dressing and double-cross dressing.

Perhap the material and the personality are too strong and too complicated to allow the Chevalier to be a mere 'extra' in a novel about someone else?

Congratulations on your shortlisting!
And what a fabulous story. This has to be the ultimate in cross dressing and double-cross dressing.

Perhap the material and the personality are too strong and too complicated to allow the Chevalier to be a mere 'extra' in a novel about someone else?

Wonderful! It agree, it sounds like transgender. Especially after seeing last week's documentary, Me, My Sex and I, (still available on BBC iPlayer)

Thanks for sharing and for participating in Cross-Dressing month! Huge congratulations on your shortlist, too.

I am pleased that the Chevalier continues to receive admirable commentary. There are some in England who follow in his footsteps to this day. I find it very educating to pass as either a man or a woman, to see life from both sides (as it were).

Strangely enough, a possible Spy (i.e. agent of subversion) that can randomly appear when playing as France in Napoleon: Total War is "Charles, Chevalier d'Eon", with the trait "Deadlier than the Male". I don't know if having her appear in my game was pure chance, or if that character complete with traits implying crossdressing is linked (so that they're automatic for one with that name), but it's certainly interesting.