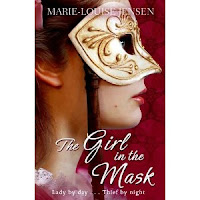 Taking up Caroline Lawrence's theme again, I'd like to look at the reasons behind cross dressing in historical fiction. I think this will at least partly answer the point that's come up in the comments; why do we have plenty of girls dressing up as boys but so few boys dressing as girls?
In three of my books, the girls wouldn't dream of dressing up as boys. None of these main characters has any need to step outside her female role, though they might push at the boundaries of what that role allows. But in The Lady in the Tower, Eleanor dresses as a boy once in the story; to take part in a tournament.
This is a very practical necessity. Women weren't permitted to joust, so she needed to be in male disguise. And secondly, you needed to wear armour to do so. With the best will in the world, a Tudor dress wouldn't fit inside a suit of armour. Eleanor has no particular desire to be a man, but she wishes to do something that men do. It's been her dream. So cross dressing is born of a desire to take part in a forbidden acivity.
In my forthcoming novel, The Girl in the Mask, there is a lot more cross-dressing going on. Early Georgian costume for the wealthy (like Tudor dress) was a way of showing status. It proved you could afford a dressmaker, the latest fashions and the costliest of materials. BUT and it's an important but, above all, it proved that you were too weathly to need to work. Because women's gowns were utterly impractical. You were laced tightly so that breathing was difficult; any kind of exertion became problematic. The gown and petticoats were heavy and bulky, so it was difficult to move about. And the fabrics were often brocade silk, satins or velvet so they weren't easily washable. So you couldn't risk playing, climbing, running, sitting on the ground or a hundred other things you might want to do. You could decorate a drawing room or grace a ballroom, flirt with your fan, or if you were very daring, show off your gown at the promenade - which was paved so there was less risk of dirtying your hems.
How can any girl possibly have adventures that are exciting to the modern reader while confined in this way? My character Sophia wants to climb out of her window, roam the city at night, climb out over the city walls and commit highway robbery. She can do none of those things in a brocade silk gown, hoop and layers of petticoats.
Try reversing this. What was there in a woman's world, that a man might be desperate to try out? Um. Absolutely nothing. He could do all of it - more easily - as a man. Nothing was denied to men but fainting and the vapours and they were caused by costume and hardly enviable.
This perhaps explains the lack of cross dressing by men in historical fiction. I'll just mention two exceptions, both from the novels of Georgette Heyer. In The Talisman Ring, Ludovic Lavenham dresses as a French maid to avoid capture by the Bow Street Runners. And Robin Tremain in The Masqueraders becomes a lady to evade capture for his Jacobite past. The former is made comic, as several people have described. But the latter is serious; it is a life-and-death disguise. Even so, Robin is described as 'humilitated' when his disguise is seen through by a friend. But it is only the need for disguise for their own safety that makes this cross dressing even remotely acceptable.
It's not cool for boys to play at being girls. It's not aspirational. Wheras the other way around, cross dressing opens up a world of freedoms and opportunites. As the saying used to go; boys have all the fun. We can be glad that has changed.

Posted by Marie-Louise Jensen at 08:33

I just saw the trailer for the newest Sherlock Holmes movie... and how right you are! Even cool Robert Downey Jr only gets humiliating laugh appeal from dressing up as a woman.

"I admit it's not my best disguise," says Downey as Holmes to Watson, then strips off his shirt to play a few more scenes with smeared lipstick and blue eyeshadow (VERY Victorian!) and topless.

One of the valid occasions for a boy to dress as a girl is when he is in disguise in order to "shadow" somebody. (This works especially well if the boy is young, good-looking & gender ambiguous like P.K. Pinkerton, the hero of my new series set in Nevada in the 1860's.)

But in the end you're sadly right: It's not cool for boys to play at being girls.

Sadly you're right. And isn't there a small history of men dressing as women to shame opponents they were fighting as well? I remember a prof telling us Heath Ledger's character in 'A Knights Tale' (who doesn't dress as a woman) was based on a real life man who dressed as a woman when he went to jousting contests. A sort of 'Ooo even a woman could beat you' shaming gesture.

But wouldn't it be freaking lovely to have more boys dressed as girls in historical fiction if authors could do it without invoking laughs or shame? I would buy ALL those books.

I know exactly what you mean , but all the same it's not strictly true that real women didn't have adventures dressed as women. They did. It's just that writers, on the whole, have not chosen to write about them. Ann Turnbull's 'Alice In Love And War' is a great example of a riveting historical novel, set during the English Civil War, in which a young girl runs away from the farm where she live to follow her sweetheart as a camp follower to the army, and has more adventures than I should like to undergo - all in women's clothes. And there was Lady Anne Clifford who held Skipton Castle for the King - and what about the Pankhursts...?

This is a discussion that can run and run. I think I'll make anothe contribution to it for my post in early November!

Excellent points, Marie-Louise. I will delve into those two Georgette Heyer books you mention to see how she does it.

I agree with you Kath. But I was talking more about the wealthier classes. Very different rules applied to working girls like Alice (I love Ann Turnbull's novels too!)There were also very specific eras when women's fashions were so restrictive.
I've remembered another man-as-a woman in historical fiction; in Julie Hearn's Ivy, there's a man who dresses as a woman to lure rich girls away from their parents and steal their clothes - very creepy!

In my novel, The Flower to the Painter, a young woman artist in late 19th century Europe disguises herself as a man to advance her career. That's consistent with the theme of women in the past who cross-dressed to enter professions that were, for the most part, closed to them.

As for male cross-dressing in history, the myth of Hercules and Omphale could provide a good basis for a story. Following some transgression of Herc's, the gods condemned the hero to serve Omphale, The Queen of Lydia for a period of time. While in her service, Hercules wore Omphale's clothing and took to female tasks, like spinning, while the Queen donned the hero's lion skin and carried his club. And they became lovers and enjoyed their game.