THE FIGHTING WRITER by H.M. Castor 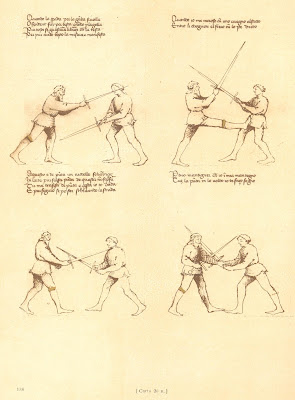 I may as well 'fess up straight away. I’m unfit. An aerobically-challenged, 41 year-old mother of two. My body was not built for physical feats. I used to do a great deal of ballet (in my youth), but my joints always creaked and groaned even then. I was not born bendy – quite the opposite – and when I worked for a while at The Royal Ballet (not as a dancer, but as a dance notator) the stretches I used to watch the dancers perform were enough to make me weep with envy (lie on your back, one leg extended straight along the floor… now touch the other foot to the floor above your head… and breathe…). Add to this the fact that I now spend my days hunched over my desk, my exercise consisting of little more than an arm-stretch now and again in the direction of the bookshelf, or a steady pad to the kitchen and back for another bucketful of coffee, and you will realise the magnitude of the challenge I faced when writing as Henry VIII for my novel VIII.

Because Henry – as long as his body was capable of it – lived to fight. He was obsessed with martial arts (early 16th century English style) and what’s more, he was very good at them. Since for a large portion of my book he is fit, athletic and capable of a good scrap, this was going to need to be a significant feature of the narrative. How could I possibly write a convincing fight scene – or rather, several? How could I recreate the moves? I was used to watching the construction of ballet choreography, and we all know that sword fights in films are choreographed too… but not only is fight choreography a highly specialised art (of which I know nothing), it isn’t even what I was aiming for. I didn’t want a fight that made good viewing – I wanted a real fight.

And, other than childhood tussles with my sister, I am lucky enough to be able to say that I have never had a for-real physical fight in my life.

My first answer was a trusty one, with which many writers will be familiar: procrastinate. As I wrote my drafts, I found myself skipping over the fight scenes time and again, sketching them loosely but leaving the detail for later. This could not, of course, go on indefinitely. Eventually the time came to face it: I was going to have to grapple (if you’ll excuse the pun) with the problem. 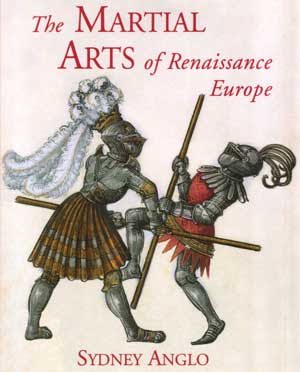 So I took my courage in my hands and heroically, ahem, browsed (online) the wonderful shelves of The London Library. I found many gems, both contemporary (medieval and renaissance) treatises on fighting techniques (the picture at the start of this article is from The Flower of Battle, an Italian martial arts manual, written c. 1410) and modern books too. Two of the latter that I would especially recommend to anyone interested are: The Martial Arts of Renaissance Europe by Sydney Anglo and English Martial Arts by Terry Brown. Both are fascinating and rich in detail, and the particular delight of Terry Brown’s book is that he has hands-on knowledge and includes, not only a wealth of historical evidence, but step-by-step photographs explaining various techniques.

Terry Brown is, in fact, something of a hero of mine (from afar - I've never met him). Already a hugely experienced and accomplished practitioner of Eastern martial arts (he has studied Fong Yang kung fu ('The Beggar's Art') for 44 years, plus Singapore's national martial art Khong Chang ('Open Palm') to Black Belt 2nd Dan level) he has now spent many years researching and practising English martial arts techniques.

'English martial arts' is an odd phrase (and please note I'm aware that there must also be Scottish and Welsh equivalents, but in researching Henry's life I necessarily had to concentrate on the English tradition). School audiences are always somewhat baffled by it (understandably). Martial arts? No problem! Not only have most of them heard of Bruce Lee or Jet Li and seen a film such as Crouching Tiger, Hidden Dragon or House of Flying Daggers, but also there's always a sizeable crop of hands in the air when I ask how many attend lessons themselves. However, it's invariably Eastern martial arts we're talking about. As Terry Brown says in his foreword:

During the past fifty years there has been an explosion of popularity in the martial arts: kung fu, karate, taekwondo, among others, are names and systems that immediately spring to mind. It is therefore understandable that many in the West regard the Orient as the home… of martial arts. This means that many of us have tended to accept that European cultures did not have formal martial arts systems, and that when our fighting men (and women) went into battle they did so as members of the ‘hack 'em and bash 'em brigade’… [On the contrary] the English had at their disposal an extremely sophisticated martial arts system that was every bit as effective as those originating in the Orient. 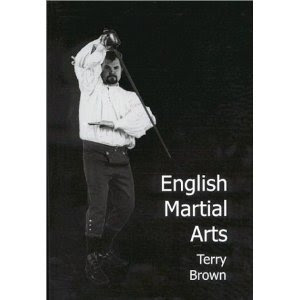 This is quite a stunning thought – especially when you consider that this system, once so established, has been almost entirely lost (and would be so completely if it weren’t for the efforts of expert enthusiasts like Brown).

The origins of the English martial arts system lie, Brown’s book tells me, in ‘the heroic traditions of Anglo-Saxon culture’, added to by the Vikings’ ferocious expertise in warfare. ‘This merging of military skills gave rise to a unique and effective fighting art’, which by Henry VIII’s day employed such weapons as the broadsword, backsword, quarterstaff and billhook, as well as pairings of weapons such as the sword & dagger and sword & buckler (a small round shield with a spike in the centre, which could be used for attack – in a punching movement – as well as defence). Techniques for using these weapons were very different from those employed with the rapier (a weapon that came along after Henry VIII had hung up his sword) – and since it’s rapiers that we most often see used in film fights (though often not very realistically) I knew that watching my favourite on-screen duels was not going to be much help – sadly – in my research.

However, helpful though step-by-step photos are, nothing compares to being able to watch people in action – so I was hungry for something on screen. Something that I could watch… and watch… again, and again, and again. This was, after all, what I spent a large part of my time at The Royal Ballet doing: slowing down a video of Darcey Bussell, say, or Carlos Acosta, so that I could analyse the exact details and timing of their movements (and in the process wearing out many a video recorder’s pause function!). Happily, help was at hand in the form of the ever-useful YouTube.

I found some great teaching videos posted by experts in ancient European fighting techniques. Here are two examples of some basic moves:

A demonstration of long-sword techniques.

There I was, then, spending many a happy & absorbed hour watching… and reading… and imagining. But still I felt that something was missing. I wanted to know what it felt like to square up to an opponent. And I realised that nothing was going to be able to take the place of practical experience…

So I decided to enter the fray myself. (Please at this stage remind yourself of my first paragraph: I am an unfit, creaky-kneed 41-year-old… etc etc.) My eldest daughter (who was 5 at the time) had recently taken up taekwondo with a highly experienced teacher in Bristol who’d been recommended to us as ‘brilliant’. I sat in on my daughter’s classes. It looked incredibly fun, and the atmosphere was friendly and inclusive – the teachers were generous and encouraging not just with super-fit teenagers, but with little ones and parent-aged beginners too.

So I steeled myself for humiliation and bruises and joined in – and instantly I loved it. 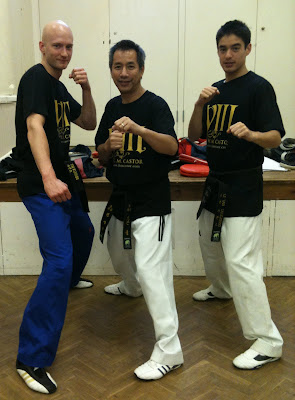 I’m not experienced enough – and probably never will be – to manage full-on sparring (if you don’t know what taekwondo sparring looks like, here’s a little film to give you a taste). But just by watching the instructors (who are themselves fantastically accomplished) and also by squaring up to them myself I have learned so much: what it feels like to be poised, alert, ready to respond instantly (if you can!) to your opponent’s move; the importance of watching your opponent’s eyes… It took me a crucial step closer to imagining what Henry might have felt, albeit in a different discipline.

There’s just one more thing to add. I’m writing my next novel now, about Henry VIII’s daughters Mary and Elizabeth. They were not, of course, trained to fight. But I’m carrying on with the taekwondo. Why? Because I’ve found it so helpful - after a day struggling with the frustrations of a chapter that won’t come right, or a plot point where I’m stuck – to go to training and concentrate on kicking & punching a pad as skilfully as I can, pitting my (limited) wits against an endlessly demanding but also endlessly encouraging teacher. It forces me to drop what I’ve been thinking about, to come downstairs from my brain into my body, and to focus completely on the task in hand: on the present moment, in other words. I leave class exhausted, aching and beetroot-faced, but with clear eyes and a brain refreshed. And very often, when I next sit at my desk, I find that the seemingly intractable problem has shifted, mysteriously…

As writers’ therapy – or therapy for anyone, in fact – I highly recommend a good fight!*

*(In a controlled environment, wearing appropriate protection and with expert supervision of course!)

For anyone who lives within kicking distance of Bristol, details of Master Le Van’s classes can be found here.

VIII is out now in hardback, published by Templar.

Respect, Harriet! In the very spirit of all-round Renaissance Man himself - well, Renaissance Woman in this case. As one who cannot even turn a somersault, I'm most impressed.

As a fellow non-exerciser, I concur with Kath - respect!

Wow! What a fascinating post and what an exciting thing to do. If I could have done that instead of netball when I was at school I might have been more enthusiastic about P.E. Between your fighting techniques and Katherine's Viking longboat skills, you could offer some violent workshop sessions...

Lol - I like that idea, Linda! Katherine's research was much tougher - I'd be no use as a boat crew member. But I could come along and do some war cries!

I am very impressed by what you've done! Fantastic.

Brilliant post. I do feel rather inadequate now though- I just make it up!

This post just proves how awesome you are… I'm so impressed! And I love the VIII tee-shirts.