Queen Elizabeth I, Perfume and Illusion: A guest post by Pauline Francis 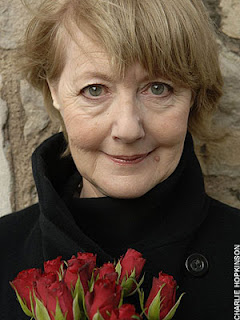 Our guest today is historical novelist Pauline Francis; this is what she says about herself on her website:

I love books.  I translated them when I lived in Africa – and I worked with them when I was a teacher and a librarian, but I never thought about writing them.

One day, about ten years ago, I decided to become a full-time writer.

My first books were for younger readers. In Drake’s Drummer Boy (1998), Will sails around the world with Sir Francis Drake; in Sam Stars at Shakespeare’s Globe (2006), Sam works with William Shakespeare.

As you can see, the sixteenth century fascinates me. A few years ago, I started to write for older readers, about people who faced very tough decisions in a world that was changing quickly: Lady Jane Grey, in Raven Queen; the lost colonists in A World Away; and the young Elizabeth in Traitor’s Kiss.

What is a typical writing day? I write very early in the morning in a coffee shop. Then I use my computer to re-write and to do my research at home in my study.

I am married with two grown-up children, and I live in Hertfordshire close to London and to Cambridge. I enjoy going to the cinema and the theatre – and anywhere where I can watch other people. 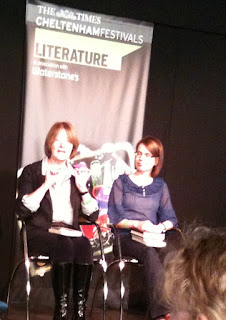 Here is a rather blurry photo, taken on a phone, of Pauline taking part with History Girl H.M.Castor in an event at this year's Cheltenham Festival.

When I was writing Traitor’s Kiss, this little nursery rhyme kept popping into my head, because I was thinking about sugar and spice in the sixteenth century:

“Sugar and spice and all things nice, that’s what little girls are made of.

Frogs and snails and puppy dogs’ tails – that’s what little boys are made of.”

Not true, of course.

I decided to write about Tudor women because they didn’t have many choices in life: they were often forced to marry (like Lady Jane Grey); executed to make way for a new wife and hopefully a son (Anne Boleyn); or expected to marry and produce an heir (Elizabeth 1). It was also the time when explorers first brought sugar back to England and only rich people could afford it.


Sugar sweetens our food. But it also sweetens life. I always eat chocolate to cheer me up if the day hasn’t gone well and as a reward if it has. So did Elizabeth – although her sugar was made into pretty rose petals.

Spice gives the illusion of good taste. Not only to bland dishes, but to hide the taste of rotting meat at a time when there were no refrigerators. Perfumes were – and still are - used to hide sweat and other smells. When Elizabeth’s father (Henry V111) was dying, his room was filled with rose-scented water to hide the disgusting smell of his pus-filled leg sores. He had a strong sense of smell, like his daughter. Elizabeth made her servants chew peppermint and thyme to scent their breath.

Not so nice: I like to look at what’s hidden – the not-so-nice bit. It’s like sitting in a boat on a sunny day, watching the clear water sparkle like a Renoir painting. But you know that the bottom of the river is murky and muddy and stinking. (I love the words stench and stink). 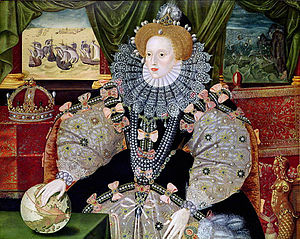 This is a portrait of Elizabeth 1, aged about 52, painted to commemorate the most famous conflict of her reign: the defeat of the Spanish Armada in 1588. She is smothered in pearls, rubies and diamonds. Her dress is embroidered and elaborate. Her hair is thick and red.

But we know that her teeth were already rotten from eating too much sugar. We know that she suffered from panic attacks which made her sweat and she smothered herself with perfume. We know that her beautiful jewel-encrusted dress smelled of damp and it would have been rubbed with lavender and roses and thyme to mask it. We know that the hair is real – but a wig.

Elizabeth was very clever. She knew how to create an illusion - an image – that her people would never forget. She gave them what they wanted.

I always rinse my hair with colour before an event. I always put on the clothes I feel best in. I always use perfume. We all do it, don’t we? And the media persuade us to do it.

Next time you’re reading a magazine, count the number of advertisements for perfumes, deodorants and air freshener products. You can even buy a room freshener with a sensor that sprays when somebody walks past. Elizabeth would have loved them.

Something to think about: should we try to hide the bad smells? When we write about difficult situations, we use phrases like, ‘smelling of fear,’ ‘smelling of blood-lust.’ We can pick up signals from other people if they don’t try to mask their smell with perfumes or deodorants because we sweat more when we’re angry or afraid. Bad breath can be a sign of disease and is a useful symptom for a doctor. Disease in the sixteenth century could kill you between breakfast and dinner if it was the plague or the sweating sickness (but there wasn’t a cure, so perhaps it was better to die smelling fragrant!).

One of mine is incense. Incense is made of spices and gum and burned to ward off evil spirits and to create a warm, safe feeling. Incensed means very angry, like being set alight.

I love looking up the meaning of words because they too hide so much. I did it long before I became a writer. One of my favourite books is A Gathering Light by Jennifer Donnelly. Some of the chapters are headed by unusual words, because her female narrator longs to be well-educated, although she has to look after her siblings.

Sugar derives from the Arabic word for gritty and gravelly. Beneath the sweet lies something gritty that gets into your teeth.

Perfume derives from the Latin words per fumam: from the smoke. Fragrant herbs used to be placed on the bodies of human sacrifice to hide the stench of roasting flesh. Church yards in cities used to give off the stench of rotting corpses and I wonder if that’s why trees and flowers were always planted?

Over to you! Which is your favourite smell? Why? Do you recognise your friends by their smell? Which smell do you hate most? Why?

Do you know that Japanese people used to say that meat eaters and milk drinkers had a distinctive smell when those items weren’t a big part of their own diet?

A last thought. If this blog gave off a smell it would be: crisps, coffee and Coco Mademoiselle.

What are they hiding?

Traitor’s Kiss was published in July, 2011 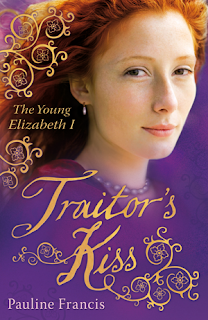 Apparently the 'stinking rich' were those who could afford a grave inside the church building, and thus stunk it out during services . . .

I love the smell of lavender - when I was a child, we had huge lavender bushes in our garden and the scent of it takes me right back. In fact, most of the smells I love are ones associated with happy memories. And I can definitely recognise people by their smell!

There's a lot of smells I hate, but if I had to pick one, it would be train toilets. Yuck!

I think yew trees were planted in churchyards so they could be cultivated (to make longbows) without doing any harm.

I hate the smell of petrol (and other aromatics). It makes me feel sick and slightly high at once. I won't fill up the car.

Hay has the most wonderful smell, evocative of warmth and grass and contented cows.

As for recognising people by their smell, I'm not sure I do, tbh. Although when I was a child I thought my father's shirt drawer smelt nasty, that dry, sour, male smell. Eh.

My favorite smells are all related to being outdoors. The smell of pines in the South of France; the smell of the witch hazel in my garden at the beginning of spring; the spicy smell of fallen leaves, and so many more.

I have a keen sense of smell. I also do karate, which makes me sweat a lot. And the Japanese are absolutely right. If I've been eating a lot of dairy and meat, my sweat has a pongy smell that I dislike. If I've eaten a lot of veggies instead, it smells cleaner.

I absolutely recognize people by their smell, and I have real problems with some people because of the way they smell to me. And I'm one of those people who go around saying "What's that smell?" So your post really speaks to me.