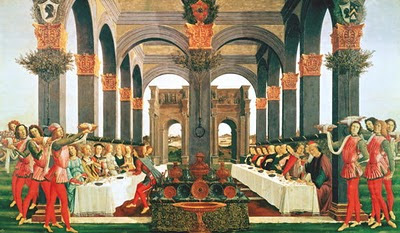 My middle daughter is getting married tomorrow. Not quite in this style (though it has sometimes felt like it) but it got me thinking about how the big life events have been celebrated in history and by whom.

I read about the marriage of Lorenzo de' Medici (the Magnificent one) to Clarice degli Orsini, when i was writing City of Flowers. I was going to have a grand wedding of four couples in Giglia (= Florence) from the di Chimici family, many of whom are enemies of my Stravaganti.  And I knew there would also be a massacre.

These details are taken from Lorenzo the Magnificent by Hugh Ross Williamson (Michael Joseph 1974):
There were to be eight hundred citizens at a feast
Country people from round about donated 150 calves, 2,000 pairs of hens and capons, together with wine and wax, for this feast.
There were over 50 dishes at the official wedding party for 2,000 guests - 5,000 lbs of sweetmeats alone.
The bride dined with about 50 young married women; 70 "distinguished men" dined separately.
This was considered to "give the citizens an example of moderation, which must not be forgotten at weddings," even though it lasted for three days. 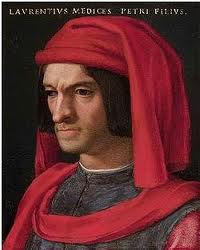 Christopher Hibbert in his book The Rise and Fall of the House of Medici, says that Clarice wore a white and gold brocade dress and rode a white horse. A whole olive tree was hoisted above her to a window in the Medici Palace on the Via Larga (now Via Cavour).  It was a dynastic marriage, not a love match, but Clarice bore Lorenzo ten children nonetheless. This portrait is probably flattering; he was not a handsome man but was so attractive in other ways that he was never short of mistresses.

My Gaetano di Chimici was an ugly young man too but with a great heart and he was one of the grooms at the wedding in City of Flowers. The night before the ceremony, the family held a tournament and a feast where a typical dish was capon in white sauce with silvered pomegranate seeds. 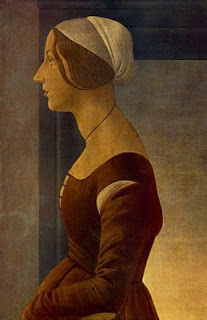 Lorenzo also had a joust but, in February 1469, when his actual marriage to Clarice took place in Rome. Lorenzo wasn't there; a distant family member stood proxy for him. Luigi Pulci wrote a poem about the joust but I have found no verses about the wedding, or the Florentine celebration which involved both halves of the couple the following June.

There were contemporary rumours that Lorenzo was awarded the palm at his joust by his young mistress Lucrezia Donati - something Ross Williamson says severely would have been "an improbable discourtesy."

Whatever the circumstances of the young noble's love life, it is clear that the wedding celebrations were at least partly intended to demonstrate the wealth that both parties were bringing to the marriage. But of course such opulence was the prerogative only of the small minority that made up the ruling class in Renaissance Italy. 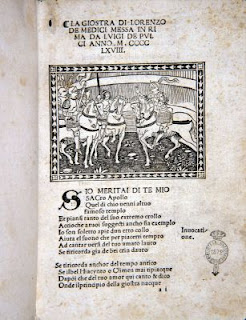 Peasant weddings were probably more like this representation by Breughel a hundred years later: 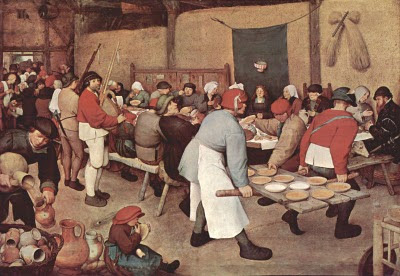 Though even this is probably idealised.

At what point did the "traditional" British white wedding get its stranglehold on the ordinary citizen?
In 12th century England "espousals" were of two kinds: sponsalia per verba de futuro and sponsalia per verba de praesenti. The first kind was a promise to be husband and wife hereafter; the second which took place if they declared at that very moment to take each other as husband and wife.

This second kind was still valid in the 16th century, even though the Church disapproved, unless its blessing was subsequently asked. And civil law did not recognise that a private espousal conferred property rights or identifying heirs. But the "troth-plight"espousal was legally valid. In 1563 the Council of Trent specified a priest and witnesses but by then England was not under papal jurisdiction.

It wasn't until as late as 1743 that the High Court declared it was necessary for a priest to be present to validate the marriage.

This fascinating information comes from an Appendix to the old Arden edition of As You Like it,  (1975) prompted by the question of whether Orlando's mock-marriage in the forest to "Ganymede" standing proxy for Rosalind, is in fact a legal espousal, since she is actually there and makes the vows in her own person.

But when did the eye-watering costs of every element from flowers to honeymoon become something that ordinary people might agree to budget for?

I'm sure that has been influenced by the televising of Royal Weddings. The rot set in with Princess Margaret's wedding to Anthony Armstrong-Jones in 1960, the first to be shown live on UK television.
That and the three that followed (Princess Anne and Mark Phillips; Prince Charles and Lady Diana Spencer; Prince Andrew and Sarah Ferguson) have all ended in divorce. But the appetite for Royal nuptials doesn't seem to have been dimmed by that, if the coverage of Prince William's wedding to Kate Middleton earlier this year in anything to go by. And the queues of people to see the bride's dress, which is now on public display.

Few families can afford to see their daughters married in St Paul's or Westminster Abbey, let alone to have whole trees imported into the church for decoration. But there has been an insidious trickle down effect from all these Saxe-Coburg-Gotha celebrations, spurred on by photos in OK and Hello and "Fairy Princess" weddings like Katie Price's to Peter Andre.

By a weird quirk of fate my daughter's bouquet is being made by someone who "does" flowers for Buckingham Palace. And unlike Lorenzo and Clarice, the couple will both be present at their wedding, to make a little bit of family history. It will be an espousal, a troth-plighting, wedding and marriage rolled into one.
Posted by Mary Hoffman at 01:01

How fascinating to see how things have changed - in particular that in the past you didn't even have to be at your own wedding! And what wonderful images you have found for this post. With regard to tomorrow's big event, you certainly couldn't have ordered better weather. Enjoy the day!

Fascinating! I did a lot of research into weddings for Sterkarm Kiss, and was astonished to discover how modern our 'old, traditional' weddings are much less than a hundred years. My mother married in 1950 wearing a green 'New Look' skirt-suit, following a truly ancient tradition of marrying in 'your best', but not in something that you would never wear again.
I also read that until the Registry of Births and Marriages act - 1880ish? - no one could ever be sure that they were married, because there were so many different forms of marriage, and differing local customs. And despite our idea that they were all so strait-laced and respectable in the past, great numbers of people simply never bothered getting married, because it was too expensive and too much faff.

Very Happy Wedding Day tomorrow, Book Maven! And may 5000lbs of sweetmeats by consumed by all, particularly those who have dieted for the day.

Fascinating to learn about the relative modernity of the current visual concept of weddings and their accessories.

I do remember reading somewhere that Queen Victoria hated weddings because she thought they were indecent.

For shy brides, non attendance at your own wedding might be quite appealing - not having to make a public spectacle of yourself. I can quite understand that.

After all, in the end, any marriage is a private contract between two people, with the terms made up as they go along. So the wedding is something else, isn't it?

Dynastic considerations apart, it is a chance for friends and relatives to invest in the marriage, which they will support with love, advice, practical help and general endorsement. That's definitely worth a party. And a very tall cake.

Anyway, have a happy and a picturesque day. Happily it looks as if the sun is going the bless this wedding and all who are part of it.

Yes, a beautiful day for your wedding tomorrow, Mary! We hope to have many photographs of all concerned to look at SOMEWHERE! Good luck to the couple and may fun be had all round.

Have a wonderful day, Mary, and much joy & happiness to the young couple, if not quite so many sweetmeats.

Am still in awe of you gathering all this information together for us at such a time, instead of pannicking over last minute items.

Lovely post, and I hope you all had the most wonderful day!

I hope it went really well, and even the trees enjoyed it. Oh, no trees, you said? xx