From the Sketchbook: The Colour of Danger 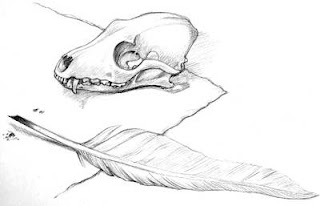 This month’s sketch is the preliminary drawing for a pen and ink illustration in my young adult novel, The Crimson Shard, set in an 18th century forgery sweatshop run by a rich and mysterious overseer. An impoverished painter instructs the young forgers on how to cut quill pens from goose feathers and makes them draw animal skulls in ink for practice. When their skills are proficient enough, they begin to forge master drawings and paintings. Obsession, greed and danger are never far from the secret workshop.

Writing about forgers obliged me to find out how forgers ply their trade and this in turn led to research on how Renaissance artists worked. This dark path led straight into the history of paint pigments and their fascinating connections with alchemy.

As a young artist, I gave very little thought to where my materials came from, except perhaps for charcoal sticks, which seemed to come direct from roasting in some fire-pit. It wasn’t until I learned that the pastels I used were possibly poisoning me that I began paying attention. Pastels are powdered paint pigments bound with gum arabic or gum tragacanth into sticks, and their dust can contain toxic substances such as cadmium. With great regret, I gave up pastels and learned how to use other far less dangerous paints.

I benefitted from the development of safer, permanent pigments, but painters of the past had to deal with unstable and poisonous materials. Cennino d’Andrea Cennini, a 15th century Florentine artist, listed the attributes and dangers of early colours in The Craftsman’s Handbook, translated by Daniel V. Thompson, Jr. For example: “A colour known as orpiment is yellow. This colour is an artificial one. It is made by alchemy, and is really poisonous.” Cennini recommends artists seek other dangerous pigments from “druggists” rather than making it themselves. The medieval apothecary also served as art supply shop. It is not difficult to imagine containers of pigment, some derived from the scales of cochineal beetles or the glands of snails, sitting next to medicines brought by traders from around the world. 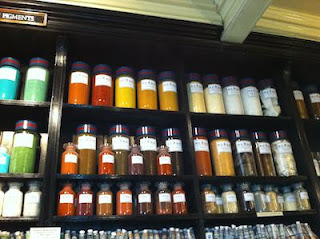 On a recent trip to London I visited L. Cornelissen & Son, artists’ colourmen since 1855. Colourmen appear to have traded in London since 1725, providing specialist art materials to artists and hobbyists. The Cornelissen shop bears a distinct resemblance to an apothecary with its numbered wooden drawers and shelves bearing jars of ground pigments and resins. They even supply “early colours” that were used by the ancient Egyptians (including the dreaded Orpiment, as well as Malachite and Realgar, another pigment that Cennini warned against) and the Romans (Verdigris and Azurite).

I was astounded to see a jar on their shelf labeled “Dragon’s Blood Pieces”. Dragonsblood is a pigment said to be the combined blood of dragons and elephants in mortal combat. It is actually a tree-based resin used as a red varnish, brought from India by early sea traders. Cennini advised that “dragonsblood” was “used occasionally on parchment, for illuminating. But leave it alone, and do not have too much respect for it; for it is not of a constitution to do you much credit.”

However enthralling it was to see Dragon’s Blood Pieces (and Dragon’s Blood Powder) on the shelf, I had eyes for one colour only: Vermilion. Cennini gives explicit advice on purchasing Vermilion from the apothecary and on how to work the pigment up, but his description is almost bland. Vermilion is a dramatic colour, not least because it was so perilous to produce, but because of the symbolic meanings of its two main components, sulphur and mercury. Vermilion resulted from the alchemical “marriage” of the complementary elements of Fire (sulphur) and Water (mercury), which also corresponded to Heaven and Earth. Even though vermilion occurs naturally in cinnabar, the pigment made by alchemical processes had great sacred meaning and was integral to the alchemists’ search for the Philosopher’s Stone.

Vermilion has a very hazardous side. Inhaling mercury fumes or the pigment’s dust could debilitate an artist and even kill him. It was not the only pigment reported to have affected a painter. Michelangelo is believed to have suffered from lead poisoning (on top of his alleged gout) and a recent excavation of Caravaggio’s bones suggests he had lead poisoning when he died.

As I stood in Cornelissen’s shop, dazzled by the jars of powdered colours, I thought of the perils artists had gone through to create beautiful work. How many of them toiled through illnesses or died of complications from poisoning? We marvel at the riches they left us, not realising the price they may have paid.

THE CRIMSON SHARD is published in the UK by Templar Publishing. Teresa thanks L. Cornelissen & Son for allowing her to take photos of their premises.

Fascinating, and the shop looks a real treat.

What gorgeous colours - and what a temptation to buy them all, just so they can stay together, doing that glowing thing!
I love your sketch - you are a talented bunny indeed.

Love this post and adore anything to do with colours. Have you read Alexander Theroux's THE PRIMARY COLOURS? I don't know if it's in print but it's marvellous.

Thanks, everyone! No, I haven't read THE PRIMARY COLOURS, Adele, but I shall look out for it.

I'd love to go to that shop - but with a knowledgeable guide! Terrific and fascinating post. Are you illustrating TheCrimson Shard then?

Coincidentally, I passed Cornelissen's yesterday on the way to the BM.

It's a wonderful shop and I introduced an artistic writer friend to it not long ago, who was in ecstasy!

Sounds fascinating, Teresa, and wonderful material for a novel.

Some lovely line drawings by Teresa in THE CRIMSON SHARD - but not enough, Mz Flavin! I wanted more!

I have just found this blog and have been enjoying reading some of the posts. I am especially interested in this post, as I have written about the history of watercolour (as an art form in itself) and one book I would recommend on pigments is Victoria Finlay's Colour - Travels Through the Paintbox. Also of interest might be Simon Garfield's Mauve.
Margaret P

May I make a blog suggestion... on form rather than content.

The writer could copy the content from Word or wherever to Notepad - then paste it into Blogger so that the formatting belongs to the style sheet not the programme in which it's written.