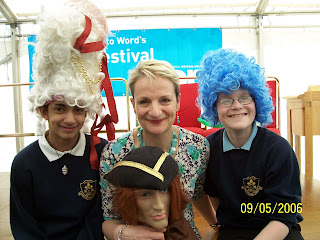 Not a bloody blog this month; a wiggy one instead. Perhaps it’s because I have such awful hair - a miserably skinny plait in childhood – that when meandering round the web, gearing up to write, I suddenly ordered wigs. Not wigs to wear every day – things are not that dire yet. I wanted wigs to get me in the mood. Hard choices had to be made. I toyed with Saloon Madam, Medeia and Geisha and eventually plumped for Marie-Antoinette, Pompadour, pink milkmaid and a blue Marge Simpson affair. Wigs without heads look rather silly. Dotted about this post are photographs of me bewigged. I also look rather silly. 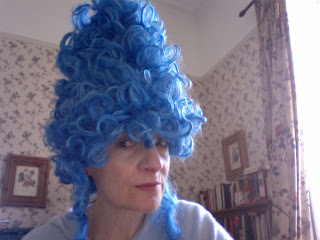 Indeed, wigs are always funny. When my mother had cancer and lost all her hair, we found much to amuse in the proffered wig selection. She opted against, in the end, and went for the bohemian scarf look. It was a light moment at a dark time. 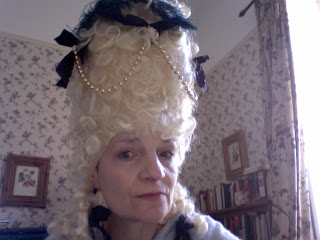 It’s not just our era that hoots at wigs, though. I think wigs have always raised a smile. The splendidly named Lady Mary Wortley Montagu, writing from Paris in 1718, was most amused by friends with their Hair cut short and curled round their faces, loaded with powder that makes it look like white wool, and then on their cheeks to their chins, unmercifully laid on, a shining red japan that glisters in a most flameing manner that they seem to have no resemblance to human faces, and I am apt to believe took the first hint of their dress from a fair sheep new raddled.
(From Anne Buck’s comprehensive Dress in Eighteenth Century England, B. T. Batsford Ltd., London 1999.)

The word ‘wig’, short for ‘periwig’, seems to have appeared in 1675, but the idea of the wig has been around since the ancient Egyptians suffered sunstroke. As with so many other things, wigs were born of practicality but, because humans are really peacocks, soon found themselves suborned into the great world of vanity. Decorated with preposterous appendages and all stuck together with bacon fat, they were not only 'must wears', they also made useful homes for assorted creepycrawlies. It wasn't unknown for a lady to go to a party bearing one family of mice on her head, only to return with another. Wigs were useful to balding men and even if you weren't bald, saved you the bother of washing your hair. Royalty turned them into a character statement: Elizabeth 1st famously wore a smart red wig to show she was a smart, fiery kind of gal; Charles II preferred a loose silky one, to show he was a loose, silky kind of chap.

Powdering the wig, as Alice’s grandmother does in my How the Hangman Lost His Heart, was not without its dangers, as Gay’s poem ‘Trivia’ illustrates:

You sometimes meet a Fop of nicest Tread
Whose mantling Peruke veils his empty Head
Him, like the Miller, pass with Caution by
Lest from his Shoulders Clouds of powder fly.
(again, courtesy of Anne Buck)

A Powder Tax instituted in 1786 indicates that there were enough 'clouds' for the Exchequer to take an interest. I can find no record of this tax being abolished.

My wigs (unpowdered, let me assure HMRC) are supposedly strictly for procrastination purposes. They live in a bag by my desk and when I can’t think of anything better to do, I put one on. But our house is chilly and the wigs are beautifully warm. Here lurks a danger. Sometimes I forget to take the wig off, and once got all the way onto the main road before realising the top of my head was still Duchess of Devonshire Aiming to Shock. Unsurprisingly, my children were never keen for me to meet them at the school gate. I considered that a wiggy bonus. 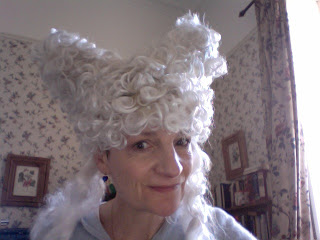 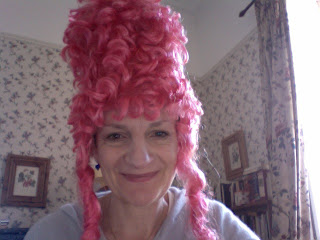 Email ThisBlogThis!Share to TwitterShare to FacebookShare to Pinterest
Labels: How the Hangman Lost His Heart, K. M. Grant, kmgrant.org, wigs

I'd never heard this, Susan. Genetic wigs! A splendid idea.

And I bet the children love them on school visits. A propos of wigs in the 18th century, I loved the criminally ingenious 'anglers' who would lie on top of carriages and 'hook' these expensive items for resale...

best laugh of the day. thank you -

Superb!! Love all the photos. What fun for Friday...

Had missed this last Friday - awash with family - but have at last tracked the reference to "Katie's wigs" down.

A lovely laugh - enjoyed the genetic wig, the anglers and mouse tales - and bet they are great for visits & talks.

Can anyone send me Katie's new email address? I set up her Skype chats with schools in the U.S. and her old email isn't working anymore. My email is catherine@balkinbuddies.com. Thanks.