Imagine the uproar there would be today if women were banned from the Olympic Games! 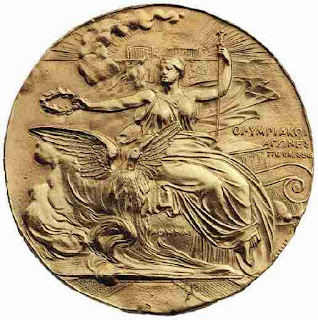 Yet, when the original games were held at ancient Olympia in 776BC, women were not only forbidden to compete, they were not even allowed to watch... according to strict local law, any married woman discovered in the sacred precinct during the games festival could be taken up nearby Mount Typaeum and thrown to her death from a high cliff.

And yet, despite this harsh penalty, women of ancient times seemed as keen to get to the Olympic Games as they are today – either to win Olympic glory for themselves, or to watch their husbands and sons compete. So if you were a woman living back then, how would you manage it?

Here is a special History Girls guide to securing your ticket…

1. Disguise yourself as a man
After the death of her husband, Callipatira, daughter of the famous boxer Diagoras of Rhodes, took over the training of her son and disguised herself as a man so she could accompany him to Olympia and watch him compete. She was so excited when he won the boys’ boxing that she leapt out of the trainers’ enclosure, forgetting her disguise and exposing herself as a woman in the process. But the judges pardoned her because her father, brothers, and son had all been victorious in their events. They then passed a law that declared trainers must appear naked as well as the athletes, making such disguises impossible in the future.
History Girls verdict: spoil sports!

2. Become a priestess
The one married woman legally allowed to watch the games was the priestess of Demeter, chosen for each festival from among the wives of current celebrities, because the original Olympian sprint (a straight dash down the stadium for a distance of about 200 metres) used to be a suitors’ race for the hand of the goddess Demeter. She got to sit on a marble throne with the best view of the events, so not surprisingly this position proved very popular. In addition to this post of honour, many unmarried priestesses would have served at the temples of the goddesses Hera and Rhea in the sacred precinct at Olympia, and got good view of the games.
History Girls verdict: the gods work in mysterious ways.

3. Buy a horse
Both horse and chariot races took place in the Hippodrome at Olympia, and the prestigious olive crown went to the owner of the winning horses, not to the jockeys or charioteers hired to do the dangerous job of racing them. In this way Kynisca, daughter of the King of Sparta, “won” the chariot race twice in 396BC and 392BC, and had her statue erected in the sacred precinct at Olympia. She started a trend, and many other women trained horses that went on to win at the Olympic Games.
History Girls verdict: what is it with girls and horses?

4. Remain single
The Olympic judges had no problem with unmarried girls, or even with women “of dubious profession”, who were all permitted to watch the Games. In fact, the five-day festival was an excuse for parties, and with so many athletic men deprived of the company of their wives, the girls would have done a good trade.
HG verdict: the “oldest profession” has its perks!

5. Visit another year
The ancient Olympic Games, like those of today, took place once every four years. During the three years between, Olympia was perfectly safe for women, and girls could compete at special games of their own, the Games of Hera dedicated to Zeus’ wife. The only contest was the sprint, held over a distance of about 160 metres (40 metres shorter than the Olympic distance for men and boys), and fortunately the girls did not have to run naked.
HG verdict: sounds like a booby prize to me.

6. Build a time machine
The law against married women at Olympia was enforced well into the Christian era, despite the introduction of short foot-races for girls at the other three main games festivals held at Nemea, Corinth and Delphi. Even at the revival of the Olympic Games in Athens in 1896, there were no events for women, although they could attend as spectators without fear of the death sentence. It wasn’t until the second modern Olympic Games, held in Paris in 1900, that women were allowed to compete – though by this time chariot racing had turned into more ladylike pursuits such as tennis, and Charlotte Cooper of Great Britain became the first woman to win a gold medal at the modern Games by winning the tennis singles.
HG verdict: Up the Girls!

A version of this article was first published in The Lady, 2004.

Katherine Roberts’ "The Olympic Conspiracy" (part of her out-of-print Seven Fabulous Wonders series for ages 10+) is now available as an e-book for the special introductory price of 86p / 99c until October 31st.
Buy from amazon.co.uk
Buy from amazon.com

http://www.katherineroberts.co.uk/
Posted by Katherine Roberts at 04:00

Hilarious, and very interesting! I had no idea there were all these sneaky ways into the Ancient Olympic Games. Raised a real smile this morning. Thanks!

Great to see that the e-book is up and running and thanks for such an entertaining post this morning.

Is it wrong that this article immediately had me picturing the Monty Python team wearing false beards?!

Glad you're enjoying it! I thought it deserved another outing, especially since its first outing in 'The Lady' was to promote the original HarperCollins 2004 paperback edition of The Olympic Conspiracy... maybe this proves old aritcles (and books) never really die, they just get recycled in different forms...

Juliette, how flattering - I'm a great fan of Monty Python!

What fun. (But personally I'd probably rather be taken up Mount Typaeum and thrown to my death from a high cliff than HAVE to watch the Olympic Games.)

Well, the girls at the games of Hera didn't have to run naked, but they did run in an off-the-shoulder chiton which exposed one breast. A compromise?

At last, a post on the ancient world. Fun stuff. Thank you.

Google celebrates the 120th anniversary of the modern olympic games. Here a Video with all images of the doodle (usually the users see only one): https://www.youtube.com/watch?v=BA7tWOGcafk
Best wishes, Martin