The Lady of the Mercians: Sue Purkiss

When Caroline Lawrence first suggested that we might have a cross-dressing theme going on this month chez The History Girls, I didn't at first remember that there is an instance of a girl dressing as a boy in any of my books. But there is. In Warrior King.Athelfled (she's called Fleda for short in the book) dresses up as a boy, because when her father, Alfred, flees the Danes to go into hiding in the marshes of Athelney, she feels he needs her there with him. As far as he is concerned, she is to go into hiding with her mother and siblings: they will be safer away from Alfred - he's the one Guthrum, the Danish leader, is after. The only way she can go with him is in disguise.

Generally, I think that cross dressing in historical fiction occurs because, as Marie-Louise Jensen has explained, as 21st century writers, we want our girls to get up to all sorts of things which would have been difficult in a long dress. After all, it wouldn't be much of a story if it went: Got up. Helped Mother make breakfast. Did some weaving. Had dinner. Walked in garden. Did some more on tapestry. Had supper. Played the harp a bit. Went to bed. And of course the social and cultural contexts played a part: quite apart from the practicalities, girls weren't expected to do much beyond the domestic. (Or so we believe... I do so distrust generalisations.)

But this wan't why Fleda had to borrow some of her brother's clothes and sneak in among Alfred's small band of riders. No - it was to do with point of view.

I wanted to write about Alfred for all sorts of reasons. I won't go into them here - if you're interested, you can go and have a look on my website, where you'll be warmly welcomed. But there was a difficulty. This was to be a book for young people, and so it needed to be written from a young person's's point of view.

This was no problem at all for the first part of the book, which is about Alfred's childhood - Alfred himself was the viewpoint character. But then I wanted to skip over the intervening years and write about his epic struggle with Guthrum - and in particular, his remarkable feat in emerging from Athelney, when surely no-one would have put the smallest denomination of Anglo-Saxon coinage on him regaining his crown: wiping the floor with Guthrum - and then, astonishingly, instead of executing his foe, converting him to Christianity and making a peace.

The problem was - who was to be my viewpoint figure? At first I toyed with the idea of the narrator being someone in Alfred's household. I tried it out - but it didn't really work for me; I wanted to keep the focus on Alfred, not on some new character. Then I wondered about Alfred's children. How old would they have been?

His son, Edward, was too young to be taking a very active part in things - from memory, he was about seven. But his oldest child was a daughter, Athelfled, and she would have been ten. Perfect! She could go with Alfred into exile in Athelney - she would be his inspiration and his chronicler. But he would not take her knowingly into such danger; hence the cross-dressing. 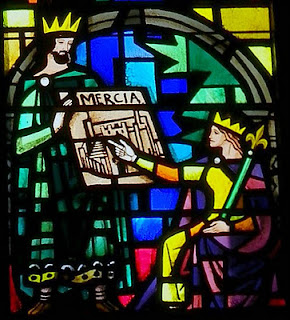 Interestingly. Athelfled did not spend the rest of her life making cakes or sewing tapestry. She was married at a young age to the King of Mercia. She had a daughter, but no son. When the king died, the people chose to be their leader not a noble thegn or a trusted warrior - they chose Athelfled, who became known as the Lady of the Mercians. The Lady, with her brother Edward, by now King of Wessex, defended their peoples against new Viking attacks.

Whether she wore a dress or trousers, history sadly does not record.

This is rapidly becoming one of my favourite blogs. Another great post!

Thanks Sue...this is all new territory to me and I find it fascinating. Love the stained glass.

Thanks, Thomas!Isn't the window lovely? It's in Chester Cathedral, apparently.

Brilliant, Sue! I read The Warrior King, of course, but didn't know about the Queen of Mercia.

Thank you, Sue (and thank you, Thomas.)

This introduces another aspect of the cross-dressing - that being a boy means that you can 'take care of' as opposed to be someone who must be taken care of, and even a liability or a security risk.

It is only by seeing these tropes in action, in storylines, that we see how subtly and deeply the conditioning flows.

It feels like a challenge to write a boy who dresses as a girl into my WIP, but given that he already has a face and character for me, I can already see how very difficult it will be to achieve without a comedic element - something that is totally unnecessary, it seems, if a girl crossdresses as a boy.

As you say, Sue, you made your choice because of a necessary POV at a certain age - but the issues were there for you to deal with too.

Caroline's theme has truly provoked a great deal of thinking.

Fascinating! Thanks for posting.