Even the Ghosts are Reading Books - Emma Darwin

Everyone knows that writers are also readers, and by writers I don't (for once) just  mean novelists. We need books, and we need more books than we can afford or house, so we need libraries. But we also need books, as far as is possible, when we need them: not before (because working with too much research is like trying to catch a waterfall in a cup) and not after (because it can be hard to re-route a story which has gone off on mistaken rails). I have friends who almost live in the gorgeousness of the new British Library, which has moved out of the Victorian-neoclassical glories of the British Museum Reading Room to live next to the Victorian-gothic glories of St Pancras station. I have other friends who bring joy to their local librarian's heart by using every drop of all that professional expertise, but neither of those are quite what I need; the essence of my practice as a writer is that when I'm doing research, fact-checking is the least important part of it. The more important stuff is what I can't really know that I'm looking for, so certainly couldn't find in a catalogue.

One day back in the 1840s, the story goes, the great historian Thomas Carlyle was sitting in the British Museum, waiting for the books he'd ordered to be brought from the bookstacks. He waited for an hour and a half, unable to get any further with what he was working on, and when they arrived they were the wrong books. And because of how the Library worked and still does, even if he did re-order them, by the time they'd been retrieved and brought to him, most of the working day would be over. Up he got and walked out, and on his way home to Chelsea he vowed to found a library where scholars could go into the bookstacks for themselves, browse, find and retrieve what they wanted, and take it home. 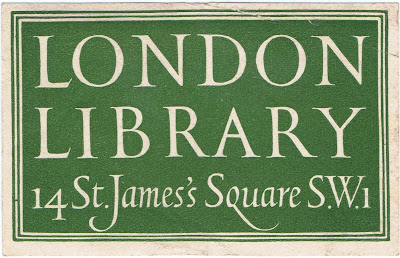 The London Library began on the first floor of the Traveller's Club, in Pall Mall, and Thackeray was its first auditor. It grew fast, and soon moved to its current home round the corner in St James's Square; Eliot (George), Dickens and my own great-great-grandpapa were among its early members. Its current president is Tom Stoppard and you'll see many a face you recognise from a book jacket and many more that you don't, as you look up from where you're tucked in a corner in Science & Miscellaneous Quarto, digging among the early books about photography. (Why is Photography not in the Art Room? Well, the library was founded only four years after Fox Talbot patented the Calotype, so I'll forgive them.)

But it is, very emphatically, a working library not a social club: this blog entry gives you a better idea and more pictures than I possibly can. There is now very nice room tucked up in the eaves to have coffee and eat the sandwiches you brought with you, as there wasn't when A S Byatt set the first scene of Possession there, but that's about the only visible concession to modern habits. Oh, and the enormous e-library you can get at from home, the wifi, and the Twitter account: just follow @TheLondonLib. It's recently somehow found space in a very crowded corner of the world to enlarge itself considerably, mainly thanks to the success of another member's little book of comic poems about Cats: Eliot (T.S). Essentially, though, it's just the nicest place in London to work, and the library that best combines practicality (once you've got the hang of its idiosyncratic classification system) and scholarship, and that's why I and thousands of other writers of every kind are members.

But none of all these delights would be worth the membership fee if it didn't do what I want. A central tenet of the Library's philosophy is that knowledge grows, develops, shifts, but it is never outdated. And so, unlike public libraries they never get rid of a book. This is particularly useful for the historical novelist, because the pre-siftedness of a history book may well not tell me what I need to know.

So, in The Mathematics of Love Stephen and Lucy drive along the north coast of Spain, from San Sebastian to Bilbao. Google Earth and a cheap plane ticket could tell me about the physical geography, but what about the human geography? I only found the answer by kneeling on the iron-gridded floor of the bookstacks, in Topography>Spain: an 1860s guide to travelling in Northern Spain, complete with engravings by Honoré Daumier. There was an overloaded diligence staggering along those mountain roads, the costumes of market women, farmers, sailors, priests and nuns, evocations of crumbling villages and bustling towns, the usual English horror of Catholicism and the pity for the picturesque peasants that they weren't allowed to know any better... even a picture of the writer preaching Evangelical Protestantantism to a group of urchins on the beach. And most delightful for me, were observations of the lingering scars of the Peninsular War. Perhaps the innkeeper the author found more welcoming than most in San Sebastian was the son of the man who welcomed Stephen fifty years before. For A Secret Alchemy the formal history books were essential, of course, as I was dealing with real historical characters, so some of the time my booklist looked more like a historian's, even though I'd hesitate to show it to the really proper historians around me in the Reading Room.

And the Work in Progress? All I'll say now is that not only has that shelf of very early photography books been well-explored, but the one I have on my desk at home has patches of chemical stains. And since the science, like the art, of photography, is eternally restless, I can probably narrow down those stains to about twenty years or so. I wonder who put them there? It's not really essential to the novel that the 1913 Baedeker to Southern France, which is next to it on my desk, has pencil notes in the margin about mountains climbed and hotels stayed in. It has a list in the back, in the same hand, as the scholars say: Photographs, and a plan for the week. Who was it?

You'll have gathered by now that for this historical novelist, at least, part of the joy of the London Library is that I'm walking (kneeling, writing, longing for coffee) in the footsteps of my fellow-members of and in the past. They have their stories too, and since the Work in Progress has real historical people in it, and some of them were members of the London Library, maybe all I'll have to do is sit there, at one of the quiet single desks in some corner of the stacks, and listen for the whisk of petticoats or the harrumph of a handsome pair of whiskers. In the London Library even the ghosts are reading books.
Posted by Emma Darwin at 08:30

Ah, Emma, what a wonderful post - you've made me long to live in London again (and that's an achievement!)... The London Library also has a wonderful service for 'country members': you can search online and they will post books to you. And the staff are terrifically helpful. But of course there's no substitute for being able to walk along the stacks... I only wish that they hadn't had to put the membership fee up by such an astronomical amount. I do understand that they needed the money, of course, but I had to bail out, with great regret. Looking forward to coming back sometime, though!

Leeds has its own gem. The Leeds Library, (www.theleadslibrary.org.uk)the oldest private library in the country. Although private, they welcome writers and researchers. They never throw a book away so have a wonderful collection. They continue to buy new books at members' request. Although it's on a busy shopping street in the city centre it is a quiet haven of books full of the kind of gems you describe, Emma.

Thank you for your fab post! The London Library is indeed a wonderful place - I was lucky enough to be able to see it (though unfortunately didn't get the job I had applied for there!) There was something about the stacks and shelves full of books that makes it a rare and amazing place!

Fabulous post....thanks! Getting to it late but it is a very wonderful place, to be sure. Must say a word also about the wonderful Manchester libraries. And does anyone know the Portico in Manchester? A private library set up by among others, the husband of Mrs Gaskell.

Glad everyone enjoyed it - and thank you, Harriet, for adding the bit about country members (always sounds like a rude bit of Hamlet) and postage. Something delightfully traditional about it, isn't there, in the electronic age.

Somewhere there's a wonderful blog by a library-geek, of all the most gorgeous libraries. Must see if I can find the link.