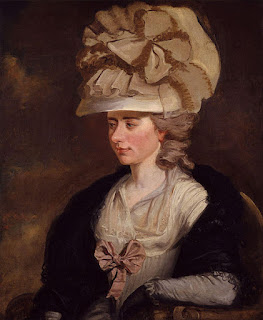 I was inspired by Marie Louise Jensen’s post on Aphra Behn, so may I put forward another pioneer, the wonderful Fanny Burney? Virginia Woolf said "All women together, ought to let flowers fall upon the grave of Aphra Behn... for it was she who earned them the right to speak their minds." Fanny Burney she called “the mother of English fiction”.

Novelist, playwright, diarist and letter writer she is one of those stars of the 18th century whose liveliness and delight in skewering her characters (real and fictional) made the period come alive for me.

In fact, I’m indebted to her whole family. Her father was a respected musicologist who travelled Europe to study music, I used his observations of castrato singers writing of Anatomy of Murder; and her sister Susan left in her diary a wonderful account of the opera season of 1781 which was also invaluable. 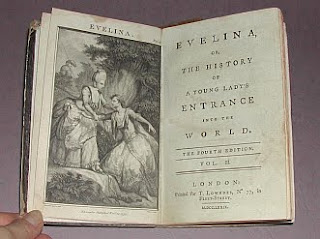 Fanny remains my favourite though. She published her first novel, Evelina, anonymously in 1778, and it was an instant hit. She seemed to have thoroughly enjoyed hearing her friends praise the book to her, not knowing that she wa

s the author, and laughed at herself for it. When her identity became known, she found herself admired and befriended by Hester Thrale, another writer of very useful letters, Samuel Johnson and Sheridan. If her play of the following year, The Witlings, is anything to go by, not all her acquaintances were literary luminaries of such standing.

This play, never produced in her life time, has a very thin plot that serves as a vehicle for a full-blooded satire on amateur writers and their admirers. There is Mr Dabbler, who wants nothing more than an opportunity to read his verses and have them praised; Lady Smatter who misattributes every half-remembered quote she comes up with; Mr Codger who never manages to finish a thought, because everyone about him is so keen to speak themselves, he never gets beyond his ponderous introductions and my favourite, Mrs Sapient who states the obvious and banal as if it is the fruits of long study. We’ve all got a bit of those character in us. The play has real vigour and bite. It’s also very funny, and the non-romantic hero, Mr Censor, has such a talent at cutting these monsters down to size, you could call him a sort of proto-Darcy. Actually even though Witlings was never produced (women writing comedy was pushing it a bit), Burney was a huge influence on Jane Austen. Does this, for instance, sound familiar? ‘The whole of this unfortunate business," said Dr Lyster, "has been the result of PRIDE and PREJUDICE.” (from Cecilia 1782)

Sorry, I can’t resist just quoting a moment from Witlings: 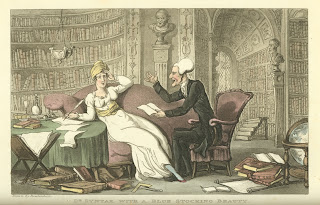 Lady Smatter: I was reading, the other day, that the memory of a poet should be short, that his works may be original.

Dabler: Heavens, madam, where did you meet with that?

Lady Smatter: I can’t exactly say, but either in Pope or Swift.

Dabler: O curse it, how unlucky!

Lady Smatter: Why so?

Dabler: Why, madam, ’tis my own thought! I’ve just finished an epigram upon that very subject! I protest I shall grow more and more sick of books every day, for I can never look into any, but I’m sure of popping upon something of my own.

Dabler: Why,— if your Ladyship insists upon it — [Reads.]

And kindly grant this little loan;

Make me forget whate’er I read

That what I write may be my own.

Beaufort: But pray, sir, if such is your wish, why should you read at all?

Dabler: Why, sir, one must read; one’s reputation requires it; for it would be cruelly confusing to be asked after such or such an author, & never to have looked into him. especially to a person who passes for having some little knowledge in these matters. 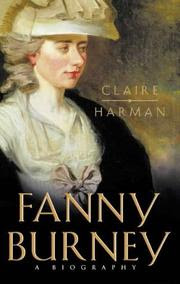 The whole play is online here. It’s well worth a read. Now, I can’t cram half of what needs to be said about this woman into a blog post, so can I recommend the brilliant biography of her by Claire Harman? Just to turn that suggestion from a temptation to a necessity, think of the following choice nuggets, (and this is aside from her importance from a literary point of view). She was a witness to the madness of King George III. He chased her through the gardens at Kew. She wrote one of the most harrowing accounts of surgery pre-anaesthesia that exists, describing her mastectomy; and here’s the one that really makes my eyes widen thinking of what she saw and experienced in her life - she was four years older than Mozart and died the year Cézanne was born.

Oh, thank you for posting this Imogen. I adored 'Evelina', and remember all the debates as to whether FB was one of Austen's 'silly Lady Novelists' or whether she was actually an inspiration. Like you, I suspect the latter.

'The Witlings' is, I think, the key. It's possible to read 'Evelina' and think Fanny is too soft and uncritical (except of the 'vulgar' characters!) - but 'The Witlings' shows how sharp she really was. Thanks for posting the link - it's years since I read it and it's great to have another chance.

Thank you for this lovely post! I LOVE Evelina - I've read it at least five times. And even without knowing about the play or of the phrase 'Pride and Prejudice', it always made sense to me that Jane Austen was inspired by Burney. Some of her most embarrassing social scenes are reminiscent of her writing.

You might want to check out Penelope Aubin too. Have left a comment on the Aphra Behn post about her. There are a whole drift of 18th century women writers who are ignored.

Thanks for the lead, Ness. And yes, I love the way she doesn't pull her punches in Witlings, Louise. The form of a play gave her much more freedom, don't you think? Marie-Louise, glad we have another hero in common!

Great post! I grew up in the place where Fanny Burney met her husband, so I've always been interested in her. I'm ashamed to admit that I haven't read The Witlings yet, though – I must rectify that immediately!

Late to this as have been busy, but it's a wonderful post about a really interesting woman. Thank you!

Her harrowing but eloquent account of her mastectomy is, I think, one of the finest pieces of writing there is. Her ability to distill experience into words is unsurpassed.