A Love Note To My Unlovely Local Library Catherine Johnson 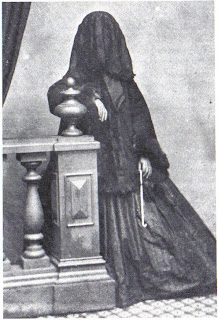 There's only a sort of love in this post. I've never really written an out and out romance, the book that most closely fits the bill won't be out for another year (at least) so I thought about this instead. A week ago was National Libraries day and I owe plenty to Hackney Central library. Young readers often ask where do you get your ideas from, and the answer, more than once, has been my library.

This happened ages ago, the book in question STELLA, is now out of print, but it came about because of lots of things all swirling about, and coalescing around a book I picked up by accident: Lou Taylor's Mourning Dress. A Costume and Social History.
As a Londoner I have always loved our wonderful cemetaries. I grew up in North London, and when I was young and Highgate was closed to the public we would often climb in, a pretty big dare as the place was always in the local paper due to satanist activity. Funerals are a big thing with my family too, my Welsh grandmother had a fantastic collection of funeral cards from 1898 onwards. Invitations with the date and a quote or two from the Bible. Lovely things.

Then I went to the library with my kids, as usual. However the library had moved into porta cabins, draughty and clunky like two biscuit tins stacked on top of one another. And of course the children's department was on the top floor. Not at all conducive to an afternoon spent lazily flicking through the racks of picture books or sprawled on a beanbag with Six Dinner Sid. However, the reference dept, squeezed and squashed into about an eighth of it's usual space was right next door. I started on the spiritualism and stopped when I found Lou Taylor's (a fashion historian in Brighton) marvelous book. I took it out three borrows in a row and wrote STELLA. I even wrote Lou Taylor a card to say thank you.

The library offers so many wonderful mind jogging opportunities. If I ever get stuck with an empty brain I am right there. One books leads to another and a million new questions spread and grow. It is lovely.

When the library moved into it's new modern (and definitely toxic) new home the book had been moved. I eventually tracked it down the plate in the front warned it was now not to be lent out, but only for use in the library. I had to buy my own

This is one of the many, lovely illustrations; Mrs Howe of New York in Mourning dress.
Posted by Catherine Johnson at 08:57

And that photo is positively scary. No wonder the Victorian era was full of ghost stories. Has she a face? Is she a real person? Shivers down the spine time.

Dear Mrs Howe. I wonder if she was more concerned with her outfit rather than the loved one who had died? I can't imagine going to a studio to be photographed in what I was wearing to a funeral. And what's that in her hand?
Fascinating. I'm not surprised your discovery of the book led to a novel.
Three cheers to our libraries.

Her dress is intriguing. I wonder if it was ever the custom for men to cover their face when in mourning.

There's some really interesting stuff about veils in the book. It is so worth a read!

Sometimes wonder if all the HG recommendations send a shiver through library search engines:
"Why is that book suddenly being requested all over the land?"

Sounds a fascinating book. I think the essentially tactile browsing aspects of public libraries are seriously under-valued. Not sure "download the first chapter" is quite the same process.

The book on mourning dress fashion sounds intriguing - glorious photo. I adore browsing books, especially antique books (favourites to dip into include a medical book and a book on etiquette, both from the late 18th century, plus illustrated Victorian fairytales). Sadly none are from the library and nowadays a book is removed from the shelf if it shows signs of wear, but I appreciate the library for modern books (and maps). For me, second hand bookshops are the sirens and I have to shut my eyes and walk on!