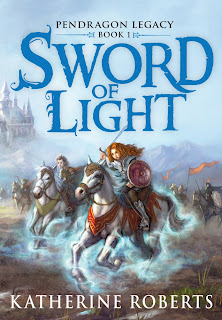 This month sees the publication of Sword of Light, Book 1 of my Pendragon Legacy quartet about King Arthur’s daughter, published by Templar.

As you can tell from the cover art by talented New York artist Scott Altmann, this series belongs firmly at the fantasy end of my writing spectrum, whereas my previous novel “I am the Great Horse” (told by Alexander the Great’s warhorse Bucephalas) lay firmly at the historical end.

King Arthur is obviously less historical than Alexander the Great, even when authors try to stick to the facts, so I thought it would be fun to create a History Girls scale of 0-5 (where 0 is pure fantasy and 5 is historical fact) and try to grade some well-known elements of Arthurian legend. Do let me know if you disagree!

King Arthur
The good news is he probably existed. But if he did, then he’s likely to have been a Dark Age war leader rather than a great medieval king. Nennius tells us he lived in the 6th century following the departure of the Romans from Britain, when he fought several battles against the Saxon invaders.
Conclusion: Undoubtedly a hero, but a dead hero… all those rumours of him returning from Avalon when we most need him are obviously fantasy, because in my opinion we need him NOW.
HG rating 3

Mordred
King Arthur’s nephew, who killed the king on the battlefield of Camlann after a long and messy skirmish where just about everyone changed sides. The bad news is Mordred was probably real too, but unlikely to have been King Arthur’s son conceived under enchantment as Mallory would have us believe.
Conclusion: A villain of the darkest sort, ready to betray his friends and his own family to get what he wants.
HG rating 3

Camelot Castle
Arthur would have needed some sort of fortress in which to train his knights and lick his wounds after battle, but it’s more likely to have been an uncomfortable bachelor pad where nobody ever does the washing up, rather than the romantic high towers of legend.
Conclusion: An Englishman’s home is his castle, however humble.
HG rating 2

Round Table
Arthur and his knights had to eat their wild boar somewhere. I have a round table in my kitchen, but it wouldn’t seat many knights, and my “siege perilous” is a chair with a wonky leg rather than a magical seat where nobody dares to sit. Anyway, I’ve never seen the Grail appear floating above it in a ray of light… at least not yet.
Conclusion: Whatever shape it was, there was probably some dancing on it.
HG rating 2

Knights of the Round Table
Pretty sure to have existed, since there is historical evidence for mounted knights by the time of the Crusades, and Arthur’s secret weapon was meant to be mounted warriors who could ride quickly to battle. The much-loved medieval knights who joust in re-enactments today are their descendants.
Conclusion: We’re still knighting people today, so this is serious stuff.
HG rating 5

Avalon
Do you honestly believe Glastonbury Tor is a magical fairy island where Arthur’s body was taken after Mordred killed him?
Conclusion: If you do, then you should enjoy my book!
HG rating 0

Excalibur
If Arthur existed and Mordred existed, then a decent sword must have existed as well so they could fight each other. Who knows what Arthur called it? Probably a few rude things, if the battle was going badly. The Lady of the Lake stretching up her hand to reclaim Excalibur after Arthur’s death is pure fantasy, though warriors did offer their best weapons to water spirits, so there is some historical background to that story.
Conclusion: Every hero needs a good sharp sword.
HG rating 3

Merlin
The king’s enchanter. Traditionally an old man with a long white beard and staff looking a bit like Gandalf in “The Lord of the Rings”. More recently, a young boy with sticking-out ears in BBC’s TV series “Merlin”. Was he a druid? Maybe. Probably not a wizard, though.
Conclusion: More likely to drink blood in the sacred groves and scare people with his tattoos.
HG rating 1

Rhianna Pendragon
Who? She’s King Arthur’s daughter and the heroine of my new series. Pure fiction, you might think, except there’s a slim possibility Arthur did have a daughter or two lying around, since (male) historians like Nennius are unlikely to have thought a girl deserved writing about. And remember Celtic women did fight alongside their men, the most famous being Queen Boudicca who saw off the Romans.
Conclusion: Dare you to say I don't exist!
HG rating 0 1 2 3 4  5


For an author creating a work of fiction, high numbers on the history rating can be tricky. It sometimes feels like writing in a strait-jacket, making sure your historical characters do what they are supposed to do, when they are supposed to do it. Low ratings obviously offer more freedom, and a rating of 0 offers the most freedom of all – but it can be scary doing pure fantasy, since you have to make everything up. For me, the ideal rating is around 2 or 3. That’s enough history to anchor my story in people’s imagination and give me some background to work with, but enough freedom to invent a magical plot… making King Arthur's daughter an ideal choice.

SWORD OF LIGHT is published this month by Templar in hardcover. For all the latest gossip including links to reviews you can follow Rhianna Pendragon on Twitter at www.twitter.com/PendragonGirl
Katherine’s website is at www.katherineroberts.co.uk
Posted by Katherine Roberts at 04:00

Also feel sure that your HG scale will prove rather useful with the Tome home here.

Yes, I agree that 2 or 3 is pretty good to work with. Good luck with your exciting new book and I look forward to meeting Rhianna.

I love that grading system! And it's fun to see the different elements of the Arthurian myths analysed that way! :P

Best of luck with your new series! :o)

Katherine, really - OF COURSE Glastonbury Tor is magical! otherwise, how do you explain the fact that you can see it from almost everywhere in Somerset?

I love this scale of historical truth. Fabulous stuff. Good fortune attend Rhianna and you too!

such a good idea to grade the historical truth - and then adjust the potion so it's still palatable with fantasy seasoning. Rhianna gallops off the page - she's definitely got a 5.

Good to see the Arthur legends still going strong and developing new characters. Good he now has a new daughter..... But by the way, Mordred was never the son of Morgan le Fay - it was Morgause,Morgan's sister....
Best of luck with the series.
- John Matthews

OK, Sue, you (and anybody else who lives in the shadow of Glastonbury Tor) can have a 5 for Avalon.

Ah, yes John... I think Malory does indeed have Mordred as Morgause's son, raised/adopted/influenced by her sister Morgan, though in simplified versions of the legend he actually becomes Morgan's son... Morgause does not exist in my series, so I'm afraid the witchy Morgan has to take all the blame!

I like to think of Cadbury Castle, near South Cadbury, as the historical Camelot. It really is an impressive spot and worth a walk around the top. And you can see Glastonbury Tor!

Of COURSE you can!