From the Sketchbook: Dickens and the Illustrators 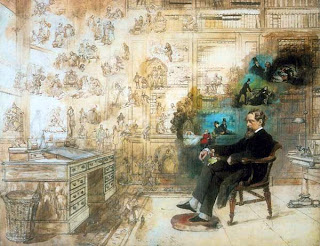 
If I hadn’t seen their illustrations, I probably would not have read the works of Charles Dickens, whose 200th birthday has just been celebrated. I admit I sometimes buy a bottle of wine because of its beautiful label or pick up a book from a display because its cover is so compelling. Sometimes the contents disappoint, but not in Dickens’ case. The text and images complement each other so well, I can’t think of one without thinking of the other. An article in the i newspaper this week mooted that Dickens will not pass into obscurity, as other authors have, “because his famous characters still speak to us”. I would suggest that this is in part due to their illustrations, which brought the characters to life and have since informed so many film and television adaptations. The illustrators who created them were the storyboard artists of their time, visualizing characters and setting key scenes for each installment of Dickens’ stories. Of course he originated the characters and plots, though two of his illustrators strongly disputed this, and I think they would stand up without illustrations, but I am so glad the pictures are there.
Illustrators interpret and illuminate a text, working to a “brief” and deadline set down by the publisher. They are problem solvers, used to altering sketches at the publishers’ request or delivering finished work after working all night towards a deadline. Dickens’ work was published as weekly or monthly serials, so his illustrators would have been obliged to come up with numerous acceptable sketches and finished drawings that could be engraved for print. They would also be working on specific illustrations before Dickens had even written the sections they belonged to. But whereas today’s illustrators might live a continent away from the author whose work he is illustrating and have little or no contact, Dickens developed close relationships with some of his illustrators and wielded a lot of power over their work.
So perhaps it’s a bit odd that I’ve chosen “Dickens’ Dream”, an unfinished painting by Robert Buss, to lead this post because he failed in his commission to illustrate The Pickwick Papers. The publishers, Chapman and Hall, were unhappy with the final product; Buss’ drawings had not translated well into etchings for print and he was let go. His story will resonate with any illustrators who have ever fumed over poor quality reproductions of their work or agonized over finished illustrations didn’t measure up to their preliminary sketches. Buss could have been bitter about the failure, but he was not. What touches me about his story is that he continued to admire Dickens’ work and painted “Dickens’ Dream” after his death. It’s a gentle tribute, paying homage to the author and to the illustrators who successfully illustrated the works after his dismissal. For me the painting’s sketchiness contributes to its appeal, with its characters appearing to grow out of thin air. This was not intentional. The painting is incomplete because Buss himself died before it was done. 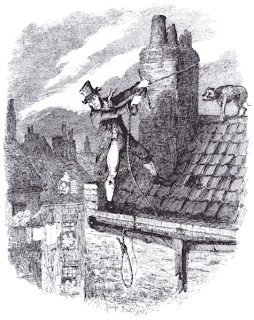 There was no such admiration from other quarters. At the start of his career Dickens was paired with George Cruikshank (see image at left), one of the most prominent caricaturists of his time. This is still common practice today; publishers hope that the popularity of one will raise the profile of the other and help the book sell. In 1836 the publisher John Macrone commissioned Cruikshank to illustrate both series of Sketches by Boz, Dickens’ collection of short stories. Cruikshank collaborated with him on several other books, including Oliver Twist two years later. Their relationship deteriorated in later years when Dickens criticized Cruikshank’s moralistic books promoting teetotalism. Cruikshank struck back after Dickens’ death, claiming that the idea for Oliver Twist was his.
Controversy also surrounded the next artist to work with Dickens. The popular caricaturist and illustrator Robert Seymour was known for the characters in his sport-themed cartoons. Such was their success that he and publishers Chapman and Hall wanted to create a monthly serial about the “Nimrod Club” featuring his sporting characters’ adventures. Dickens, fresh from his success with Sketches by Boz, was hired to write stories linking the illustrations, but was not interested in working from Seymour’s illustrations, much less ones about sport. He convinced Chapman and Hall that he should write monthly stories about a club, though not the Nimrod Club, and Seymour should provide the illustrations to his text. This evolved into The Pickwick Papers and young Dickens dictated the look of the characters and scenes, even getting Seymour to change Pickwick from the thin character he had envisioned to the fat man we know so well. During work on the second issue, Dickens weighed in with suggestions for improving the proposed illustrations, upsetting the older and more established Seymour, who saw his original ideas disintegrating. He had already suffered a mental breakdown a few years before and, tragically, after meeting with Dickens to discuss changes to his work, Seymour committed suicide. 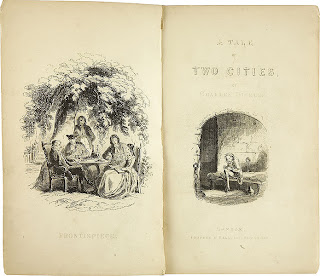 The Pickwick Papers rolled on, however. After Robert Buss was rejected, Hablot Knight Browne (see image at left), took up the commission and went on to collaborate with Dickens for over two decades. He became the well-known “Phiz” to Dickens’ “Boz” and illustrated ten of his novels, enjoying an excellent working relationship with the author, and managing to add layers of detail to his illustrations that go well beyond the tight brief.
These are just a few of the many illustrators who brought Dickens’ words to life.

I invite you to do an image search one day and wonder at the number of artists who illustrated later editions. There is an astonishing array of styles and approaches. They may even make you want to pick of a copy of that Dickens novel you never got around to reading.
Teresa Flavin is the author and illustrator of The Blackhope Enigma and The Crimson Shard, historical fantasy novels for young readers, published by Templar Publishing in the UK and Candlewick Press in the USA. She is currently at work on her third novel.
Posted by Teresa Flavin at 00:15

It's always so interesting to read the stories behind the well-known ones. What a sad story about Seymour, and how generous of Buss not to turn away with an angry sniff! Thanks, Teresa.

What a fascinating post. I too love the Buss picture - and its unfinishedness in particular - having known it as the cover image of a book my parents had when I was a child (and no doubt still have!). However, I knew nothing about its history, or that of Buss himself. How fascinating to come at Dickens' work from this other side - the illustrators' side.

I love this post. And those pictures too. Thanks so much. I am still full of yesterday's cake but this is just what's needed today!

Very interesting post, thank you. Perhaps perversely, as an illustrator myself, I've always been a bit ambivalent about Dickens' illustrators. His characters seem too large to be confined in that way and I tend to ignore the pictures when reading. I've always thought Buss' 'Dream' wonderful though.
For more modern illustrations I recommend those of Charles Keeping for the Folio Society, pub. in the 70s & 80s. Keeping's work is rather out of fashion these days (he died some years ago) but his bold use of line and flamboyant style are a good match for Dickens' prose, I think.

As Harriet comments, it's in the 'unfinishedness' that lays the charm of Buss's wonderful illustration. How I wish the tradition of illustrating adult novels could be revived. I guess it's mostly a question of cost in a business where profit margins are so low - but what wonderful collaborations there could be...

I loved reading this Teresa as I'm intrigued by the illustrator / author relationship. I feel David Wyatt very much enhanced my historical fantasy 'Dream Master' books for younger readers and he took meticulous care with Egyptian, Roman, Viking, Arabian detail - we had a long conversation one morning on exactly what a flying carpet should look like! Scary that the illustrator was drawing for sections that Dickens had not yet written! I hear Quentin Blake speak at EBF saying he'd asked Roald Dahl to tone down the description of Miss Trunchbull in 'Matilda' as when he'd tried to illustrate her she was way over the top. If anyone gets a chance to see the musical in London there's a mighty frightening Miss Trunchbull there... well I was terrified of her.

I love 'Dickens' Dream' by Robert Buss in the main because it leaves so much to the imagination and is in itself so dreamlike. Very interesting post which opened my eyes to how many artist Dickens used. Thanks, Teresa

The above comment is from me! I forgot to add my URL. Sorry.

Thanks for your comments, one and all!