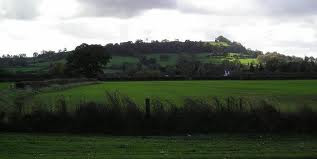 For me, Valentine's Day is not just a time for cards and flowers. I grew up in the West Midlands and every Valentine's Day, the local T.V. (ATV Today, we had it on before Crossroads) had a feature about the gruesome murder of of Charles Walton up on Meon Hill, just outside Stratford-on-Avon. Walton was killed in 1945 but the case was unsolved and had overtones of witchcraft. Enough to fascinate my brother and me (we were both fans of Dennis Wheatley) and to stick in my head.
The details of the murder were, indeed, bizarre. Walton was murdered on 14th February, a significant date in itself, but associated by the old calendar with the Celtic Festival of Imbolc. He was an old man, in his seventies, and out on the hill hedging and ditching. He was a farm labourer, living in a little cottage in the small village of Lower Quinton. When he didn't come back for his dinner, his niece went to look for him. She found him with his throat slashed with his own bill hook which was still embedded in his neck. He was pinned to the bank by a two pronged pitch fork and a large cross had been carved into his chest. It looked very like a ritual murder and Walton had a reputation for witch craft. The only thing that was missing from his body was an old tin watch. He was rumoured to carry a scrying mirror, a piece of mica, in the back of it which he used to overlook people and ill wish them.
Whatever the motives, the locals shut up like clams and eventually the famed Fabian of the Yard was brought in to try and crack the case. He never did, It was his only unsolved murder. It was said that he came back every year to walk the hill, re-visit the site, go for a pint in the pub and remind the villagers that he had not forgotten. He always believed that they knew the perpetrator but held to a code of silence. The village of Lower Quinton, which lies beneath the hill, is a small place, a few farms and a collection of cottages clustered round a green and a pub, the College Arms. It must have been quite isolated back in 1945 and, even now, it often seems eerily deserted. It's rare to see anyone about and it is still impossible to find anyone willing to talk about the case. 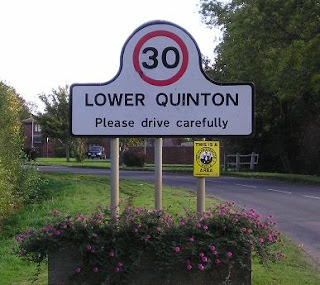 On one of Fabian's visits, he encountered a black dog. When he asked a boy if he had seen the beast, the child ran away. Later that day, a black dog was found hanging in a tree. This might just have been an incident of macabre cruelty, perhaps to warn him, but there were long associations with black dogs in the area. Walton himself was known to have encountered a black dog nine times in his youth. After the last occasion, he learnt that his sister had died. These black dogs were not regarded as ordinary hounds, but manifestations of the Barghest and the other black dogs of British Folklore. Meon Hill was said to be hunted over by the Cwn Annwn, the spectral hounds of the Mabinogion; another legend says it was the Yell Hounds, the Devil's Dandy Dogs, following Herne the Hunter, harrying the souls of the unshriven down to hell. Meon Hill itself is rumoured to be the haunt of fairies - and of witches who still gather there. It is a place regarded with superstition, even dread, by some living thereabouts. There are those will not walk on the hill in the daytime, let alone at night. 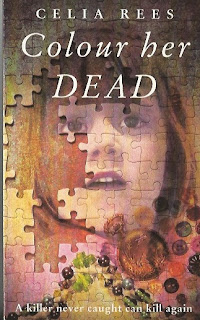 The stories are many and odd and exert a fascination. I've revisited the place several times in fiction. The first time was with Colour Her Dead, now long out of print. I changed the name of the hill, the village beneath it, the details of the case, but kept the unsolved nature of the crime. What interested me was the missing watch. With so much time elapsing, I began thinking: what if it turned up in a junk shop somewhere - in nearby Stratford, say? Put there by someone clearing somebody's effects with no idea that this is vital clue to an unsolved murder. What could happen then? So are books born. I changed the victim to a child and the watch to a handful of beads found in a junk shop by 17 year old Jude who likes to make her own jewellery. It has been out of print for ages, but I was pretty proud of Colour Her Dead. Very Ruth Rendell, even though I say it myself.
The next time Meon got a mention was in The Fool's Girl. Shakespeare coming home on May Day, after Beltane. I took a bit of poetic licence, but the hill is visible for miles around and he might just have been able to see it from the old road between Stratford and Oxford. He would certainly have known it and its reputation. The hill even appears in my new book, This Is Not Forgiveness, under the guise of Beldon Hill, casting its spell, exerting its powerful natural magic in a whole new way.
Posted by Celia Rees at 00:01

If I really was a cat this would send the fur up along the ridge of my spine.

The essence of macabre fascination lies herein--the very stuff "Criminal Minds" and "Cold Case" (USA television drama)is made of. The supernatural element, composed of authentic Celtic lore, and it's perversion into murder most foul is the cream of every mystery that focuses on human behavior. I like the original character very much. This said, not to criticize your choice at all, only to point to a preference for older subjects. Too bad you were not able to pursue the mystery of the facts to a conclusion. But such is a fiction writers priority--take the inspiration directly to your own creation.

PS
I love the History Girls!

I love the way we can take real events and weave them into stories. And this has so many mysterious elements - I'm not surprised you revisit this. (One wonders if there is a missing diary somewhere, hidden in the attic of someone in the village, with the answer to the mystery - or maybe it's best that we never know.)

This post is so fascinating for me, because I grew up in Warwickshire and though I never went to Lower Quinton or walked on Meon Hill I knew of what kids called 'the pitchfork murder', though only sketchy details... I have no memory of who told me, or when, but it shows how a story gets passed on, whispered about by generations of children. Thank you for filling in the details, Celia - chilling & intriguing.

As the kids say: WOWSERS!!! Fantastic story, Celia and you tell it so well. I reckon you could revisit it again in a kind of 'Mr Whicher' sort of way...but then would you want to?? Some stories, perhaps, best LEFT....oh, I'm creeping myself out here. But marvellous post. I too, love the notion of 'overlooking' which I hadn't heard before though of course ill wishing is more familiar. Fay Weldon wrote a wonderful novel called PUFFBALL which is all about ill-wishing!

Macabre and creepy story Celia! I love all the Celtic mythology about the Sidhe who live in the green fairy hills. And the theories that the whole witchcraft thing was fragments of older, Celtic religion that survived pre Christianity.

What a stonkingly good story - you couldn't make it up! (Well, you probably could...) Very Denis Wheatley indeed. Would be fascinated to go there - but also a little scared.

What is it about teenagers and horror? I used to terrify myself with stories by Algernon Blackwood and such like - not to mention Bram Stoker...

Wonderful! Great story, Celia. I love these stories of ancient traditions bubbling up in the present, and the accidental cracking open of old cases. It's what lead to the writing of Island of Bones.

Sue, for me it was a second hand copy of 'Fifty True Tales of Terror'. I can still picture the cover and feel the chills as I do...

History is about the small and local, as much as it is about powerful people and great events. Fascinating to know, Harriet, that the case had become playground folklore by the time you were growing up.
I'm not about to embark on a Mr Whicher, Adele. I know people who have been warned off for taking too much of an interest in ths case, so my explorations will remain srtictly fictional.