HISTORY ON THE LINE By Eleanor Updale

I’ve written here before about my joy at moving to Scotland, and my grand romance with Edinburgh isn’t over, but I have let my heart stray. Now I’m in love with a railway line.
My business and family lives have me shuttling between London and Edinburgh several times a month on what must be one of the world’s greatest train journeys. It’s given me an idea for a book.
For the East Coast line is an historian’s delight – especially if you sit on the right hand side of the carriage on the way up to Scotland, or the left-hand side on the way down south. The route takes you past breathtaking sights, loaded with history. My fantasy book traces that line, telling the stories of many of the places you pass. 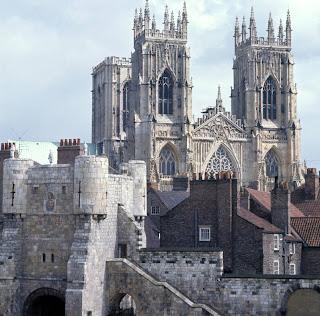 There are all the obvious ones: the big cathedrals at Peterborough, York (above),
and Durham (below) - and even Lincoln when there’s a problem and the train gets diverted. 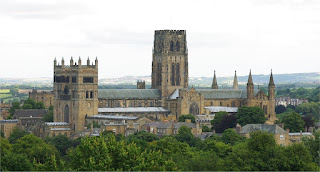 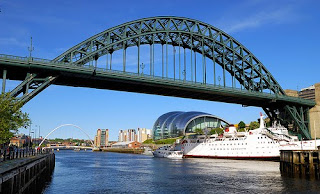 There are the magnificent bridges at Newcastle, the wild sea coast looking out to Holy island, and the beautiful man-made taming of that coast at Berwick-upon-Tweed (still at war with Russia, some say, thanks to a cock-up of treaty drafting in 1856). 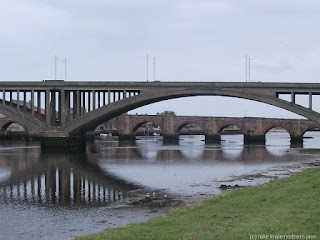 Along parts of the journey, the train runs parallel to the A1, which is itself the successor to the ancient road that joined south and north from the earliest times. The settlements whose stations fly by so fast that it’s hard to read the names on the signs are the old stabling and coaching centres of centuries ago: Grantham (home town of Isaac Newton and Margaret Thatcher – now apparently raped by the identikit warehouses of the retail trade); Darlington (which still sings of a past of prosperity and industry); ancient Dunbar, Prestonpans, and many more.
If you’re a regular on the line, you can afford to look out of the other window at the crucial moments. While everyone else is gasping over the sea view at Berwick, you can catch the majestic Tweed carrying the weight of Borders history through rolling hills. From the high track above Durham there’s an unmatched panorama of Victorian domestic and industrial building, and a steep, straight road that looks like a ski jump in the winter. At the other end of the route, just outside King’s Cross, there’s Alexandra Palace, high on a hill: birthplace of television news, and the site of a dramatic fire in 1980. And all that is a just a hint of the gems along the way. 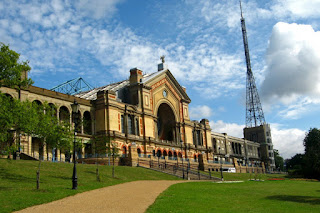 Just imagine being able to make the journey with a book that told you about some of the great events, from invention and industry to battles and bombings, that have taken place just beyond the carriage window. I would love to write it. Any takers? 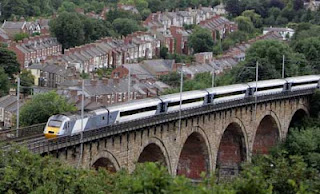 I agree. It is a lovely journey.

I've only once travelled on the line from Edinburgh to Durham, and I was that person gasping at the view of the sea near Berwick. I had been idly looking out of the window on the other side, and when I glanced round and saw that the sea was actually tickling the edges of the railway line, I was astonished. it was sunset too...

And when I used to travel to Durham on the train when I was at university there (though from Derby, not from the north), the sight of the cathedral and castle as you came in over the viaduct made you catch your breath. The book sounds a great idea!

What a great idea - a novel linked to a train journey. And think what fun you'd have researching it.

I reckon that post is worth a commission and an advance. A super idea! I love trains too and once went on a fabulous journey from Manchester to Aberdeen. As well as all the sights, I nearly finished knitting an entire jumper. Smashing!

From Mid Wales we go up the West coast and then across to Edinburgh, but I like the idea of that East Coast journey.

It's a glorious journey and this is a terrific idea. If you place yourself at one end of the train as you cross the viaduct bridge at Berwick you see the other end of the train snaking behind / ahead of you. Breathtaking in beauty and awesome engineering. There used to be an eccentric conductor who did a voice-over as the train left Edinburgh pointing out the sights and castigating those not looking out of the window. With him gone this book would sell off the trolley - probably literally too. Go for it!

Definitely! And I'm with Sue on the view from that viaduct in Durham: I think that was the real reason I chose to go to university there. I lived in a little house right under the viaduct from my second year onwards, and the only sleepless night I ever had was the night the snow was so deep it stopped the trains. I missed their soothing rattle!

I seem to have my best ideas on trains, and once wrote most of a radio play commuting into London. I, too, love Edinburgh, and, indeed, Scotland. On a fine day (and there's the rub!) I doubt there's anywhere more beautiful in the world - so a regular commute such as the one you describe sounds perfect for a writer. And in terms of dialogue, is there anywhere better than a train for stealing voices?

Oh, do it, do it - it's a fabulous idea. The railway as a linking 'spine' is terrific, because trains have always a magic of their own. Maybe it's the involuntary nature of the motion, the fact you have no control, but are carried along as if on a fast-flowing stream. Maybe it's the sound - that weird repetitive effect writers always used to translate into words, as if the chugging of ther train was anthropomorphically echoing their thoughts.

Oh, you HAVE to write it. Please.