Music is notably absent (see what I did there) from most novels, historical or otherwise, except as a useful scene setter: a lyre in a Tudor romp; a piano in a Victorian parlour. I think even Dickens largely gives it a miss.

This was wise. As somebody once said, ‘writing about music is like dancing about architecture: it’s a really stupid thing to want to do’. Stupid, probably. Tempting, absolutely - and not just writing. I recently tried to describe to my husband the delights of the Rhinemaidens’ song at the beginning of Act III of Gotterdammerung. Boredom in seconds. When I plugged in my iPod, he was charmed (well, as charmed as he ever is by Wagner, about whose genius we will never agree).

In his overview of my current obsession, Bach’s Goldberg Variations, Peter Williams asks ‘what kind of language could convey the realm of the imagination opened up by its very opening bar?’ I agree. But writers capture that realm of imagination in different ways. Music isn’t only about describing the music itself; it’s an integral part of imaginative memory.

For example, I remember almost nothing about the film Elvira Madigan, but every time I hear the Andante of Mozart’s Piano Concerto No. 21 I see a field of spring flowers and two impossibly beautiful people in love tastefully doing what people in love often do. 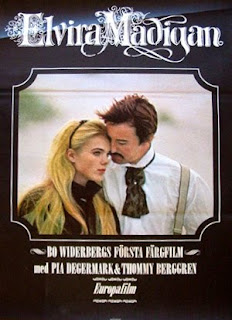 It’s impossible to hear Paul Dukas’ The Sorcerer’s Apprentice without images of Disney’s Fantasia bubbling up. Poor Mickey! Sometimes the associations are not nice. Beethoven’s Ninth Symphony, for example, is a player in A Clockwork Orange. Bach’s Passacalia and Fugue in C minor accompany the bloodbath in The Godfather, and I refuse to watch the Hannibal Lectern film in which, so I believe, the Doc does something frightful whilst listening to the Goldberg’s Aria.

It’s wonderful how music transcends its own time far better than books. Early novels are rightly part of the canon of literature, but who really reads Richardson’s Clarissa for pleasure? It’s stuck in the eighteenth century. The music of J. S. Bach (died 1750), on the other hand, still surprises and delights. Quite often, I’m listening to something unfamiliar and am amazed to find it’s not far short of three hundred years old.

Music is fluid and adaptable; it lives and breathes, so doesn’t date as words date. In some senses, there’s no such thing as historical music, apart perhaps from early operas. Once you’ve got over the shock of the big burly hero as castrato (listen and weep), Handel’s Tamburlaine is an ordeal verging on torture, particularly if the director insists on all the da capos. I take my hat off to modern audiences who pay good money to sit through it.

My work in progress, set in 1794, has five girls learning to play the Goldberg on a new-fangled pianoforte.

This is an unsigned pianoforte, made in 1795. The image comes from the Frederick Collection.

Part of my research is attempting to learn Variations myself, about which I'm writing a blog. The book is a historical novel, yet by moving the Goldberg onto the piano, I’m bringing it up to date, as it were. Old music played on a familiar instrument (even if my girls' pianoforte is hardly a modern Fazioli, see below) marries the past and present more easily than, for example, re-writing Walter Scott in modern idiom. I would never attempt to do that. (Do you have trouble with Walter? I'm afraid my attention soon starts to wander.) 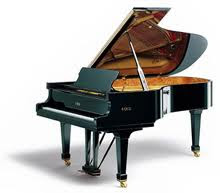 Yet danger lurks in writing a historical musical, as it were. I’ll get into trouble for all manner of reasons: the variations were written for two manual harpsichord, not a piano; although the aria and two variations do appear in Sir John Hawkins' History of Music, there’s no record of an extant copy in London before the nineteenth century; it’s a work of difficulty far beyond five girls, at least three of whom are indifferently talented. Daunted? You bet. Disheartened? Occasionally. But the joy of writing about music is that just listening counts as work and I can never get quite enough of that.

Email ThisBlogThis!Share to TwitterShare to FacebookShare to Pinterest
Labels: Goldberg Variations, the year of playing the piano, www.kmgrant.org

What a wonderful idea, to play the same music as your characters. Beautiful things will come out of this, I predict. Apart from your WIP, the only really successful music novel that springs to my mind is the ever-excellent Rose Tremain's Music and Silence.

Literature can inspire music also. My sister is part of a choir called Celestial Sirens (I keep muddling my calling them Heavenly Harpies) who made an album inspired by Sarah Dunant's Sacred Hearts, which is set in a sixteenth century Italian convent where music-making was a very serious and deeply spiritual business. The music was used when the novel was adapted for radio.

Fascinating - I'd never paused to wonder why (some) prose dates while music never seems to. It goes to a different bit of the brain, I think.

I love both the Celestial Sirens and the idea of Heavenly Harpies and I'll read Music and Silence once my own book is done. Last Sunday, unless I dreamed it (well, it was quite late), the new Upstairs, Downstairs had a smile-worthy (is there such a word) use of Debussy's L'Apres Midi d'un Faune. A lovely pointer to the developing storyline, since the opening notes at once conjure up the image of Rudolf Nureyev, and one thought leads to another. Music is man's greatest achievement, I think, and J. S. Bach probably the greatest composer the world has ever, or is likely ever, to produce. If he hadn't been born we'd have had to invent him.

I think Music and Silence is a wonderful book. There's also An Equal Music, by Vikram Seth...