How the Tudors Dressed by Barbara Mitchelhill 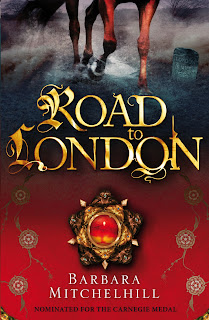 From the writer’s point of view, the historical novel, is like an iceberg with only the smallest part on show to the public. First comes the research, which can take months or even years. Next comes plotting and planning before the writing itself - and all this is the tip of the iceberg. But if our iceberg isn’t about to sink without trace, it needs more underpinning by getting it noticed. In other words, promotion.
My next book, Road to London, set in the Tudor period, isn’t published until April 5th but plans have been afoot since September as to how to promote it. After talking to Harriet Castor about the stunning Tudor dress she wears for the promotion of VIII, I had the idea of making two children’s outfits as might be worn by the two main characters in the story. One would be for Thomas, a scholar from Stratford-upon-Avon, and one for Alice, a serving wench from London. I wanted children at school events to be able to try them on and discover how different these clothes were from their own. For one thing, the outfits would be made of either linen or wool – no cotton or easy wash synthetics. A company called The Tudor Tailor was very helpful, full of advice and supplied patterns for each of the costumes. 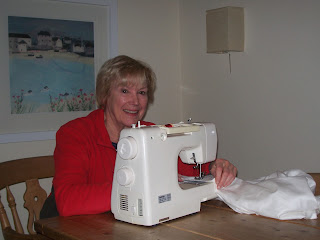 I drove up to Stoke-on-Trent to a shop called Abakhan, which is an Aladdin’s cave of fabric at great prices and not long after, I got out my sewing machine (which I confess I hadn’t used for ages) and began to make Alice’s outfit.

This is the linen smock Alice would wear during the day and she would almost certainly sleep in, too. No nipping down to M&S or Dorothy P’s to buy a nice nighty. The smock was made of linen so that it could be washed from time to time – but I can only guess that it wouldn’t happen as often as we would like in 2012. Please note that she would not wear knickers. The advantage of this was that it was easier to ‘got to the loo’ if she was out in the fields. The disadvantage was that rape was very much easier.

On top of the smock, Alice would wear a red flannel petticoat, firstly for warmth as Tudor houses, in spite of their open fires, could be bitterly cold. But the Tudors also believed that red worn close to the skin would promote good health. When Henry VIII’s body began to fail, red flannel underwear was made for him and, interestingly, Elizabeth I was wrapped in red flannel when she had smallpox.

Alice’s woollen kirtle with attached bodice would be worn on top of the petticoat and was unlikely to be washed often but dirt and mud would be brushed off. The kirtle I made for Alice has a bodice attached with ties of ribbon at the front. I think the ribbon would be bought at a fair or from a tinker passing by and might well have been given to her as a birthday present. Ribbons or laces were a very practical way of fastening the bodice as it could be loosened or tightened to fit. I could have made buttons. These would be made with a circle of cloth, gathered up tightly, then stitched with back-stitch to cover the cloth. Then, of course, you would have to make a button hole. All terribly time-consuming – so I took the easy way out and added ribbons.

Now Alice is ready for work in the tavern. Her apron is made of linen and is not gathered at the top as is a modern apron but is perfectly smooth. Her cap is simply a square of linen tied round her head to keep her hair out of the way.

With just a month to go, I must get on with the boy’s outfit. Not quite so multi layered as Alice’s – just a smock, doublet and hose. I’m pleased with the results on a limited budget. The two outfits came in at around £80 – unless you pay me for my time, of course!
Visit my website.
Posted by Barbara Mitchelhill at 06:00

What a brilliant idea, Barbara! I like the idea of clothes fastening with ribbons so that you can expand at will.

Great piece and an excellent way to understand history. As in fiction, the only way to fully understand what's happening on the surface, we need to know what's going on underneath. Can't wait to see the boy's costume.

What a great post - showing us how costumes were built up.

(By the way, knickers are not de rigueur in India - lower caste women have to pee in the street, and it is possible to do it discretely if you have only a sari to come with.)

Thanks for the information about some Indian women. Having no nickers can have its advantages. At an event for librarians last week, I was asked whether women would have underwear under the smock and they were quite shocked when I said they did not. I guess it's something we take for granted.

Dear Barbara, this is awesome! So much work and such a gorgeous result.Now I'll know what Alice looks like.

How wonderful to have my sewing admired. You've made me quite enthusiastic about making the outfit for Thomas. But I can't bring myself to make a cod piece and I think it will create too much of an uproar with the children!

Barbara, these are wonderful. I had no idea how Tudors dressed, especially the red flannel part. I enjoyed this post very much, now I am looking forward to the boy's Tudor outfit. I can't wait to read the new book.

Intrigued by Tudor belief that red worn near the skin promotes good health. Why?! Would love to know more.

Why doesn't anyone sell red underwear for health reasons any more?

(and since when did writers get paid for their time?)

What an achievement, Barbara! I doff my hat (or should that be my Tudor bonnet?) to your skills as a seamstress - there is simply no way I could have attempted this project, and the results are stunning. I think it's a fantastic idea to take these along for members of your school audiences to try on... I've found that wearing a Tudor outfit oneself is great in theory, but in practice it's hot and heavy to wear when you're trying to give a lively talk without flagging... and having a headdress over your ears doesn't help with hearing questions from the back, either! I think Alice's outfit and the boy's equivalent will be wonderful assets at your events. Do please show us the latter when it's done!

Deeply impressed by your sewing prowess! Fantastic. And doesn't it all look lovely on such a pretty girl! Fab.

So impressed, Barbara, and so wish I had similar skills for my schools events! I would suggest the school kids would LOVE the cod piece. Anything that gives them a laugh is great for events. They always love my story (just after I've dressed a girl in a red Viking apron-dress) that red colour was achieved in those days by dipping pink in cow pee. :-)