A VISIT TO MORTLAKE - Mary Hooper 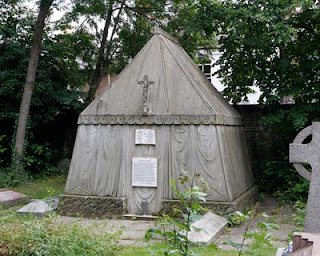 When I was writing my book set in the household of Dr John Dee (At the House of the Magician) I did a little light research in the village where he lived: Mortlake, SW London. Sadly, there is precious little left now to connect the magician to the place, just a 60s block of flats named John Dee House and looking about as unmagical as it is possible to get. There is no trace of his herb garden, his library or the huge house visited at least twice by Elizabeth I, who rode over on her horse from the Palace of Richmond. One of Dee’s biographers says that the house shared a garden wall with the church, though, and I made use of this knowledge with a scene in my book where Dr Dee tries to raise a spirit from one of the graves (this scene prompted by a 16th Century illustration).
But Dee is not actually buried in the churchyard there, which was a disappointment. To see a fascinating tomb, however, you should make your way to the Roman Catholic church a few hundred yards away, where the explorer, poet, and translator of erotic books, Sir Richard 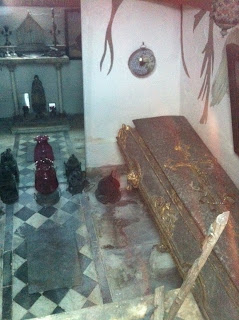 Burton, is buried in a striking above-ground sepulchure. When I first saw it, some ten years ago, it was in a sad state of decay and looked more like an dilapidated air-raid shelter, half-lost in undergrowth. Now it is restored to its former glory and resembles an Arab tent being gently ruffled by wind, complete with Catholic and Moslem insignia, including crucifix, star of Bethlehem and gilt crescents which turn and shimmer at any movement of the air.
Admire its eccentricity and read the plaque about Sir Richard’s life - but don’t go yet! You can climb a small ladder at the back and actually look into the tomb through what used to be a beautiful stained-glass window (but is now, thanks to vandals, just a glass square). Inside the tomb, the intricate, velvet-covered coffins of Sir Richard and his wife Lady Isabel can be seen, and hanging over them, oriental lamps which once shone a “dim religious light” through jewel-shaped facets of coloured glass. The floor is of white, veined Carrara marble and there are pillars in the shape of finely moulded bronze serpents. I could also see huge candles in silver candle sticks of graduated heights, immortelles and wreaths of long-dead flowers. 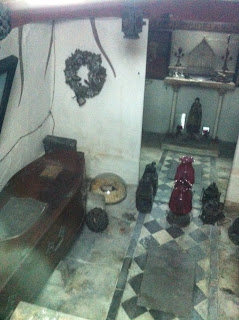 Sir Richard died in 1890 and the following year Lady Isabel wrote his biography, which was a great success. With some of the money earned she embellished the mausoleum by putting up festoons of camel bells in the roof of the tent, “so that when I open or shut the door...the tinkling of the camel bells will sound just as it does in the desert.” She visited the tomb regularly and spent what would have been her thirty-third wedding anniversary in there. When she died in 1896, she joined her husband permanently in a matching coffin.
Posted by Mary Hooper at 03:35

Such a delightful and intriguing glimpse of the Burton sepulchre, Mary. This account makes the "tent" sound so magical and memorable, especially the additional tinkling of camel bells.

Think I must start a list of History Girls Places To Visit.

Goodness! It's like a Victorian version of a pyramid! Fascinating - thanks, Mary.

What a marvellous edifice! Makes me want to visit to see it. But the coffins don't match?

madwippitt, you're quite right! For "matching" read "similar".

Oh - I recognised this monument at once. How exciting! I have a bit of an obsession with Sir Richard Burton. What a life he - and his wife - lived! So much scandal and adventure.

There was a documentary presented by the actor Rupert Everett, who rather idolises Burton as one of his all time heroes - no doubt due to his somewhat ambivalent sexual preferences, and his introduction of the Kama Sutra to western culture.Sadly Channel 4 don't have this available to replay...a great shame as it was very interesting.

This is a cracker Mary - definitely one to add to the collection of fascinating tombs!

That is seriously weird, Mary. Trust you to nose it out!