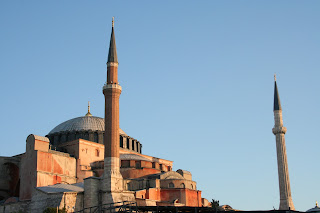 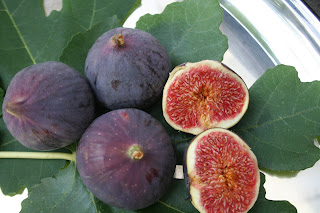 I saw the Hagia Sophia for the first time through prison bars at dawn. It hovered on the horizon, the colour of a blood orange or the inside of a split fig. How tantalising it must have been for inmates of this converted prison where I was staying.

Mission Impossible is how my guide, Tulay Zeybek Özcan, who grew up in the streets around the Hagia Sophia, describes it. In 537 AD a dome this scale was unprecedented. Under the rule of the Emperor Justinian, Anthemius, his architect, found himself in a geometric fix. How to place a dome the size he envisaged on a square? He solved it by building four massive columns at each corner of the square and on top of these columns he built arches and then filled the arches in with masonry to make curved triangles (pendentives) which spread the weight. The dome was built in the record time of 5 yrs, 10 mths and 4 days by 10 000 workers and with the 40 windows (I counted) between its ribs gives the impression of floating.

It’s equally a mission impossible in a single History blog, to begin to describe the events that turned this site, which was preceded by two pagan temples, into a Christian church damaged by an earthquake 20 years later, repaired again, and then with the Turkish conquest of Constantinople in 1453, turned into a Mosque with all its mosaics plastered and painted over, into finally what it is today – a museum celebrating Byzantine art.

From high up in the gallery, I’m a novice looking out at an ancient world. I can’t read Greek, or Latin (apart from a few words left over from school days), or the Arabesque script, nor even modern-day Turkish. I see the Hagia Sophia through a veil of ignorance but every now and then I catch a glimpse from the corner of my eye that is startling in its clarity and then it fades again before I can hold on to what I’ve discovered. 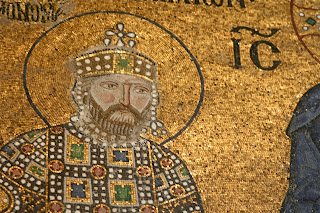 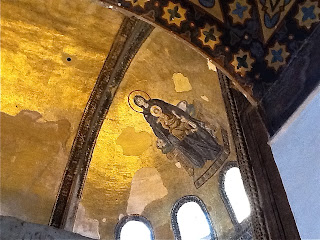 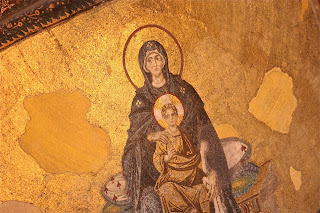 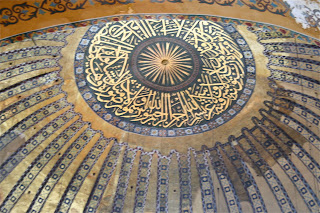 “Though we travel the world over to find the beautiful, we must carry it with us or we find it not.”~ Ralph Waldo Emerson


all photographs are the copyright of Dianne Hofmeyr. Please do not use without permission.
www.diannehofmeyr.com

Breathtaking, Diane! Thanks for sharing. Are those your toes in the picture of the floor? :-)

Yes, my toes! Just to mark that this is a floor and not a wall... unless I was spiderman! The photographs don't do the interior justice. It's an impossible mission to photograph as well! I'd return to Istanbul any day... so much still to see and that marvellous Archaeological Museum.

Did you see the Viking runes?

Yes.. but only saw one and apparently they're hoping to discover more.

What is there to add? MINDBLOWING STUFF! Thanks Dianne. Gorgeous photos. And a fascinating post. Really!

Beautiful post, Dianne. I loved your description of the colour being like the inside of a fig - perfect.
The last time I went there I left a red geranium on the tomb of the warrior Doge Enrico Dandolo.
He was guilty of the bloodthirsty and treasure-hungry sack of Constantinople in the fourth crusade and there are stories that they threw his bones to the dogs. Also, he didn't actually die there but on another campaign ... still, no one else was leaving flowers for him that day.
Michelle Lovric

They must have done a lot since I was last there, and it sounds wonderful. I was trying to explain about the building of the dome to my husband as we stood in the (also domed) baptistery in Pisa last week, and failing miserably, but you have explained it marvellously. I must get him to look. I love you leaving the flowers, Michelle!
It is an amazing building, I always think, more like a cave than any other building I know. It just impresses by its antiquity.

Lovely story Michelle and yes Leslie, there's a famous photograph of Grand Central station with light streaming down.... it has that same mammoth cave affect.

I'm still trying to get over the floating dome picture at the end... What a great thing to discover first on a blog! Thank you!