(Warning: there's not an awful lot of history in this...)

I've been musing recently about the relationship between thinking and walking. Like many people, I find that walking helps my thinking. I was going to say that it helps me to think, but it's not quite as clear-cut as that: sometimes when I'm walking I'm not consciously thinking at all. I notice things - like this morning, when I saw a rabbit sitting very still in the distance and realised - with some pleasure - that its outline was exactly the same as a relief carving I did of a rabbit years ago. Or yesterday, when I saw white blossoms trodden into the mud on the ground and looked up in surprise; what could be flowering so early? But mostly, my mind is at rest, not 'besely seking with a continuell chaunge' (to borrow Thomas Wyatt's words). Something is happening though, below the surface, because often by the end of the walk a knot is untied - whether it be a knot in a plot, or a knot of some other kind. 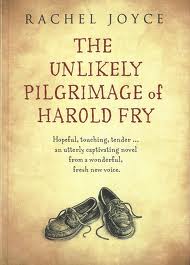 Anyway, there's that - but also, I recently read a novel called The Unlikely Pilgrimage Of Harold Fry, by Rachel Joyce. I was gripped by this book. It tells the story of a man in his sixties: very conventional, rather dull - who one day walks out of his house in Salcombe, Devon, to post a letter, and decides on impulse that he will carry on walking all the way to Berwick-on-Tweed, where the intended recipient of the letter lives. The walk changes him, and it changes others, too.

There used to be far more walkers in the British countryside: tramps, they were called. You don't see them so often now. My father used to tell me a story about one: an ex-soldier, one of the many who couldn't find a job or a place after the First World War - you can read a version of it here. Last week, a sprightly 90 year-old in one of my writing classes told us about another one, who often passed through the town where she lived with her young family in Kent in the 1950s. He was called Smokey Joe. No-one knew anything about him. He had his belongings packed onto his bike, which he never rode, only pushed along the roads. In the piece she wrote about him, Phyllis imagined that he had come back from the war and been unable to face life inside a house, with his family: so one day, he just walked out of the door: he needed the sound of his feet pounding the tarmac, the rhythm of his walking, to deaden the sounds in his head, to stop the procession of images, he couldn't bear to see.

And in the small town where I live, there is another walker. He's not a tramp -  he lives in the town. But every day, all day long, he walks. He usually has earplugs in, or he stares intently at a mobile phone screen as he walks along. He never, ever makes eye contact, and has only been known to speak to someone - angrily - if they try to push it, to make him talk. Does he walk to think, or does he walk to deaden thinking? I think the latter is more likely. Or perhaps it is that he walks to calm the thinking down, to reduce the noise it makes inside his head? I always think of him as the Walker, partly for the obvious reason, but partly also because he makes me think of the Walker in Susan Cooper's fantasy novel for children, The Dark Is Rising. That one walks because it's his destiny to do so, not just for years, but for centuries; he too carries inside him a burden of  unhappiness which is presumably only bearable if he keeps on moving. 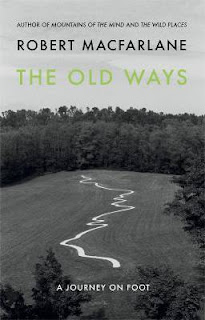 And finally, I've just started a book called The Old Ways by Robert Macfarlane, who lectures in English at Cambridge but has also walked for thousands of miles and written most beautifully about his journeys. He relates a fascinating piece of etymology which shows that the link between thinking and walking has long been seen to exist - and here it is:

"The trail begins with our verb to learn, meaning 'to acquire knowledge' Moving backwards in language time, we reach the Old English leornian, 'to get knowledge, to be cultivated'. From leornian, the path leads further back, into the fricative thickets of Proto-Germanic, and to the word liznojan, which has a base sense of 'to follow or to find a track' (from the Proto-Indo-European prefix leis- meaning 'track'). 'To learn' therefore means at root - at route - 'to follow a track'."

And so the journey goes on.
Posted by Sue Purkiss at 01:00

I do most of my plotting - so to speak - whilst walking or swimming. The reason is that when I'm doing either of those things my mind is not distracted by much else and I can focus on resolving thorny issues. I find that in the course of a long walk I can thrash out quite a few problems. The brain seems to work in a sort of random way with ideas popping up that had not occurred to me at all before.

This reminded me of two things, my grandad who was in WW1 and European men.
My grandad was in the trenches in France for about six weeks, then thankfully his regiment got moved to India. They marched most of the way, passing Ur of the Chaldes along the way, (way before it was 'discovered' in 1929)and he nearly drowned in the Euphrates river. The man who came back from the war may have done such a march, and if he had no home left it might have been a very obvious thing for him to do.
European men - I know of two men who walked huge distances as children, or very young men. The man across the road had been told off by his father in Turin and ran out of the house, kept running and ended up in Marseilles. Another left Cyprus on a boat, landed in the south of France, and walked (with another boat journey) to Southampton.
Lovely post. I think sometimes we just live in very different times.

Really interesting, Christine. I think George Orwell did a lot of walking too, didn't he - for Down and Out in Paris and London. Must re-read that.

I find walking brings my eyes into play so much more intently. I don't find myself thinking much, but I do SEE.

I have just read "The Old Ways" - and it is indeed a track to be followed!

How enjoyable a post! Made me look out of the window at the sunshine and think about walking myself.

Soldiering must make ordinary life feel strange for some. The unspoken rules of a constant community instead of the formal rules of the army. The suffocating closeness of family life and its expectations after being alone but not lonely among other men. The lack of excitement. The feeling that you had changed and that everyone else was just carrying on. Maybe that kind of travelling restlessness was easier then - more casual one-day work, less use of forms & identity documents, a greater range of informal builings as shelter, more mixed agricultural land to roam through, less surveillance and media suspicion of the odd and the old - and maybe, after a war, a tramp would not be such an odd sigh, especially when so many people had to walk. Little room for such people now, but they must be there still. I remember writing a tramping character - Wayland - in my Boy Called Mouse novel, though he is more of a "wise wanderer" figure.

Glad to see the recommendations for The Old Ways! The book had slipped my mind. Now scribbling the title on the list. Thanks, Cat and Sue.

And thank you, Penny - you've added a great deal!

Macfarlane’s “Wild Places” is also beautifully written, and well worth a read.

The combination of ancient tracks, tramps and beautiful writing reminds me of Laurie Lee’s autobiographical "As I Walked Out One Midsummer Morning". Lee’s writing is both vividly immediate yet elegiac as he describes setting out as a teenager and travelling from his rustic Cotswolds home all the way to London by foot, armed only with a bedroll, guitar and, one suspects, bags of charm and chutzpah.

He walks through country roads and byways which
"…still followed their original tracks, drawn by packhorse or lumbering cartwheel, hugging the curve of a valley or yielding to a promontory like the wandering line of a stream. It was not, after all, so very long ago, but no one could make that journey today. Most of the old roads have gone, and the motor car, since then, has begun to cut the landscape to pieces, through which the hunched-up traveller races at gutter height, seeing less than a dog in the ditch."

This was during the Great Depression, and Lee comments, “I was not the only one on the road; I soon noticed there were many others, all trudging northwards in a sombre procession..the majority belonged to that host of unemployed who wandered aimlessly about at that time." For a while he acquires a travelling companion, a veteran tramp only known as Alf, who gives him as a special parting gift a very old and battered billy can for brewing up.

For evocative lyricism tempered with a pitilessly acute observational eye, Lee's work is hard to beat.