A little bit of family history by Mary Hoffman 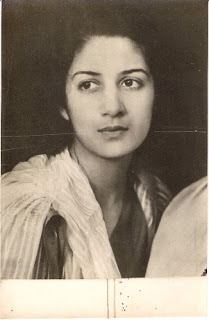 This is my mother-in-law, Roshan Mirza as she was then, in her twenties. She was born a Parsi in Bangalore, where her father Nosherwan Mirza was a High Court Judge. He was murdered by someone he had sent down, when Roshan was in her teens. By then Nosherwan was separated from his second wife, Tehminabai, my mother-in-law's mother.

After studying for a degree in English Literature (English was her first language) at Madras University, Roshan came to Oxford to read English at what is now St. Anne's. She met her future, English husband, the drama critic John Barber, when they were holding opposite ends of a banner at a demo for Indian Independence.

John Barber was a Conscientious Objector in WW2 and drove an ambulance in the London Blitz; they were bombed out three times. Roshan was a Civil Servant during the war and had her first child, my husband, in 1946, followed by his sister a year later.

The marriage didn't last but Roshan, now known as Jenny Barber, remained in England, returning only once to the country of her birth. I met several visiting members of the Indian family, who were always intrigued by the fact that I - the only family member with no Indian blood - was the vegetarian.

Jenny retrained as a teacher of English in Further Education (as a single mother she felt she had enough children at home).

I was thinking a lot about her recently, because we visited her grave on the same day as Baroness Thatcher's funeral. This is what the headstone in Highgate Cemetery looked like this week: 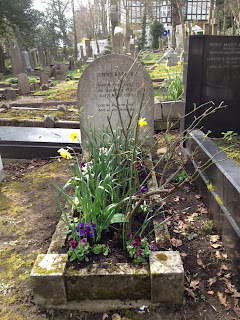 Next year will be the 20th anniversary of the death of a woman who began life in the year the Titanic went down, as an Indian Parsi called Roshan and ended it in 1994 as, effectively, an English Christian, called Jenny. She lived through two World Wars - one of them right in the thick of it. As well as her two children, she left five splendid granddaughters (each time one of them was born she got letters of commiseration from relatives in Bangalore but I think she treasured each one of those girls). She lived with us for sixteen years and told our three daughters stories about her childhood that we had never heard - the monkey who stole her banana, the aunt who had a pet panther...

It got me thinking of how each individual's life becomes a part of history, affected by events on the wider scene as well as the incidents of their personal lives. And in so many families there are people who have completely changed identities in the course of their time on this earth.

Do any of you have similar stories to tell?

I have no story I can tell ... but found this just after calling my best friend of 33 years to wish her a happy birthday. Had to share this with her; what an intriguing and lovely piece of human history, thank you for the words and the pictures.

What a remarkable woman! Thank you for telling us her story.

I just loved this story, what a fanastic woman. My mother had some wonderful stories of her childhood and her time during the 2WW. My father never spoke about it, it was too painful for him. But I had an aunt who settled in the States and ended up as the Under Secretary for Health, Welfare and Education under the Ford administration as well as organising the Bicentennial celebrations which caused havoc among the Daughter's of the Revolution as she had been British obviously. I love family stories and occasionally use elements of them in stories I write so they can never be lost. Thank you for sharing yours Mary.

What a beautiful woman and yes, the way some stories are told skipping a generation is something I've experienced as well.

Sorry, meant to say thank you for telling us about her!

How beautiful she was and what a charming story Mary. It must have been wonderful for your girls to grow up close to someone like this. Modern families are definitely the poorer for not having older relatives living with them. The photograph of her grave with those delicate flowers seemed to reflect the person she was.

Family history is the most fascinating kind, in some ways, esp if you know the person writing...your ma in law was a beauty, wasn't she, Mary? Thanks for posting this.

She sounds a most wonderful woman to know, and must be another inspiration for her grand-daughters.

what a wonderful story :)

My Dad was a refugee during the second world war and came to Britain, they agree that only English outside the house but someone heard them talking 'not English' and they got deported to an internment camp for a while until their sponsor and other could get them out and home to the Liverpool house! His clearest memory is of walking in the door and his mum saying 'right! from now on only English!' Its the small stories that get shared to children that are the ones that we must save and share.