A DIP IN THE SEA – Dianne Hofmeyr

My father was a lifesaver, a surfer and an amateur early photographer. In an old shoebox I discovered heaps of negatives and sepia photographs some still in their buff Kodak envelope sleeves from the 20’s and 30’s. His surfboard was the thin wooden type with an upturned nose, sometimes called a belly-board – the kind where the surfer lies down as he catches a breaker. I found this wonderful photograph of him from the late 30’s with a girlfriend. The board is clearly visible leaning up against the back of the car. 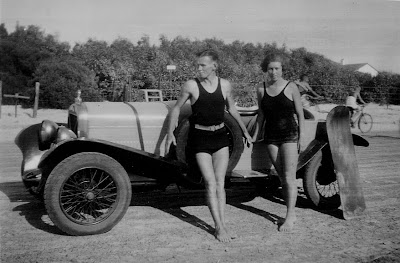 Photographs of his friends at a place called The Strand show a gang of them making pyramids and fooling around like teenagers. They weren’t teenagers but rather youths and young women. The term ‘teenager’ hadn’t yet been invented. There was nothing as indulgent as being a teenager. Boys and girls were expected to grow up and behave like grown ups. That’s why it was particularly special to find these photographs of people his age really having fun. He’s the one second from the front in glasses. (look at those cars and de rigueur sprigged beach dresses and sunshades) 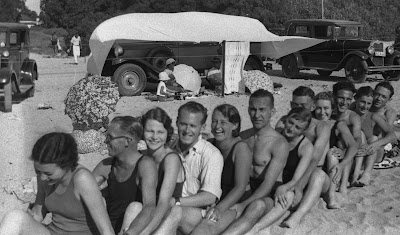 When I started researching the history of surfing and swimsuits, I came across this photograph of George Bernard Shaw holidaying in South Africa in 1931. At Muizenburg, which is the next beach up from The Strand, at age 75, he had his first go at board surfing (see below). And apparently enjoyed the waters of South Africa so much that he extended his holiday by more than two months and went up the coast to Knysna to swim as well. I also discovered that Samuel Langhome Clemens (aka Mark Twain) as well as Jack London were all keen surfers. 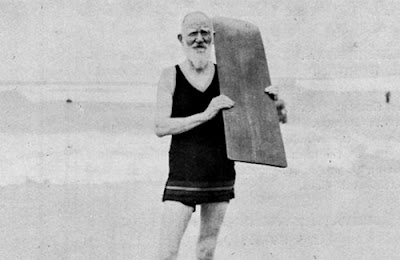 For further photographs and a report of George Bernard Shaw in the South African Travel News, click here.

I went looking for more authors in swimsuits – didn’t find any History Girls – but I found this beautiful photograph of Sylvia Plath in a white two piece. 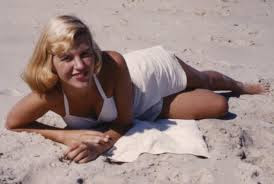 Neither my father nor Bernard Shaw were the first to trying surfing at the Cape. In 1919 two United States Marines returning to the US after the war, arrived with their Hawaiian style longboards and Cape Town witnessed the first ‘stand up’ surfing ever done on its shores. They befriended a lady, Heather Price, (seen here in the photograph wearing a spotted cloth scarf... also de rigeuer beach headgear of the time with one of the marines ) She attempted to surf on the Hawaiian longboards. Surely South Africa's first woman surfer? But the marines took their boards back home with them when their ship sailed. 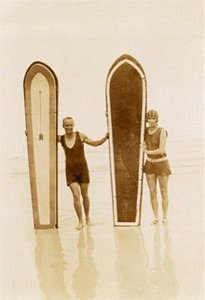 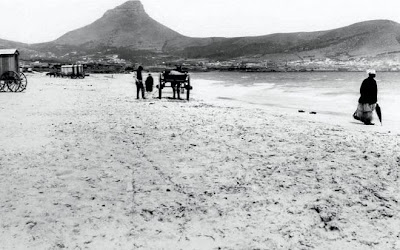 An earlier picture of Cape Town with Lion’s Head and Signal Hill in the background shows bathing ‘machines’ drawn onto the beaches by horses so ladies could swim. These were replaced by the palisades of colourful bathing boxes that still stand at Muizenburg and St James and throughout England. By the 20’s women were beginning to show their bodies and fashions changed rapidly from the black stretchy knitted unisex suits to more glamorous swimsuits of printed cotton and even bikinis. I found this photograph of my mother (the ever present cigarette in her hand) in a skirted polka dot bikini, from the early 40’s, while my sister stands behind her in one of those stretchy bubbly swimsuits. 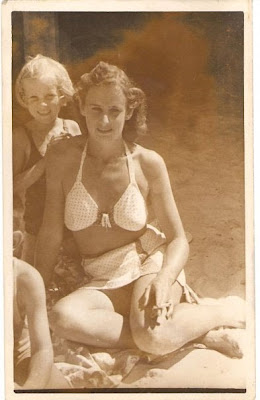 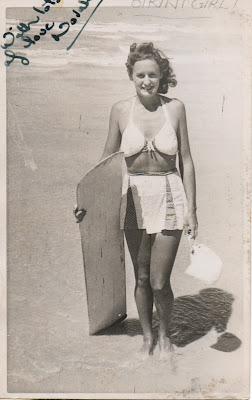 From the 50’s there’s this one of my very curvy 15 year old sister. But those were the days of Marilyn Monroe, so curves were okay. 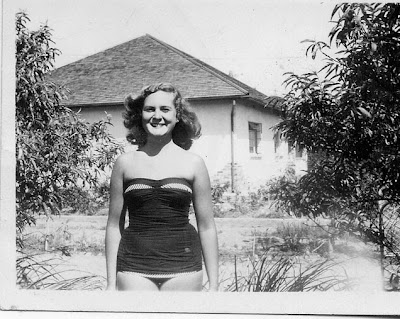 A further search of the 50’s took me to three girls on leaning up against longboards on Bondi Beach, Australia and a stylish woman in black and white two piece swimsuit (look at the wonderful straw hats). 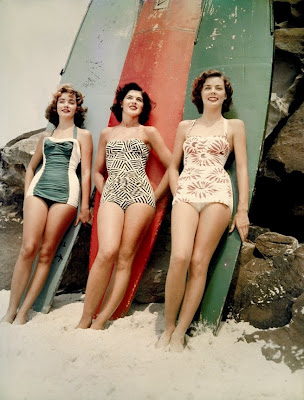 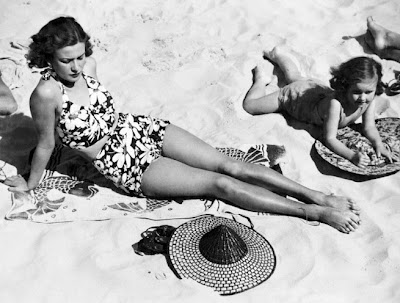 My own photographs from the 60’s (not in the same shoebox) show me wearing a bikini on the famous 2nd Beach at Clifton where I had a white cat who used to join me on sand that was whiter than any beach I’ve ever been on.

Hope you all have a great summer holiday… beach or not!
www.diannehofmeyr.com

THE MAGIC BOJABI TREE
'immensely satisfying'
from Children's Summer Reading in THE INDEPENDENT ON SUNDAY last week – 21 July 2013
Posted by Dianne Hofmeyr at 05:30

Fabulous post and great photos. Thank you for sharing!

These historical photographs and things which are described about the youngsters are really interesting and stimulating.
latest news south africa , south africa online news

Well I've found my beach look-alike in the link to Authors in Swimsuits - yes, you guessed it - Ernest Hemingway! Aside from that, I loved these photos and snippets from your past, Dianne - thank you for sharing them.

Wow, loadsa glamour! You and your sister look fantastic. I liked the other photos too. Just the right blog on a warm sticky day - only it did make me envious and long for a swim!

thanks everyone. I'm at temperatures in the 40's in Italy. Could do with a swim in the sea right now! But not complaining.