The Making of a Monarch, by H.M. Castor

With the firstborn child of Prince William and Kate Middleton (as was) due to arrive any day now, I expect that certain sections of the press and online media are awash with speculation about the nursery arrangements for ‘Baby Wales’. Not only will the décor and fittings of the room (/rooms) excite interest, but the identity and training of any staff (nannies? night nurses?) will also be scrutinised. How will the baby be raised? Will s/he be put on a Gina-Ford-style routine, or will the royal team take more of a Baby Whisperer approach? Will s/he be bottle- or breastfed? How should a future monarch be raised?

With a high-status medical team on standby, presumably ready to rush to Kate’s side the minute she goes into labour, one has to conclude that the survival of this baby, its safe delivery, is deemed (by the powers that be) more important than that of an ‘ordinary’ child. You could argue that any person who can pay for private care might feel they are thereby dodging the worries the rest of us might feel over cases like the recent one in Cumbria (though private care of course does not necessarily mean better care), but there is something extra here. The status of the child in question simply cannot fail to affect those who care for it – at least on some level.


Is this a blessing or a curse?

The ramifications of this question – albeit in a very different era – have occupied me a great deal over the past few years, since my writing has involved plenty of research into the early years of Renaissance royals. Detailed information is very hard to come by: passing references in letters and dispatches, accounts of staff wages and clothing bought can, after all, only take you so far.

Imagine my delight, then, in finding an account of a royal childhood that is every bit as detailed as one could wish. 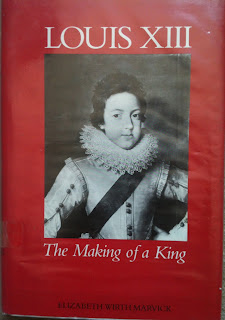 This is Louis XIII: The Making of a King, by Elizabeth Wirth Marvick. Louis XIII of France (father of Louis XIV, the ‘Sun King’) was born in 1601 and became king at the age of eight when his father, Henri IV, was murdered. What enables Marvick’s account of his early years to be so astonishingly detailed is that his personal physician, Jean Héroard, who was in charge of his day-to-day – or even minute-to-minute – care from the moment he was born, kept a fantastically detailed diary for the first 26 years of Louis’ life. It is as graphic as any Freudian analyst might wish; indeed, a contemporary described it as “several volumes in which you will find nothing except what time he [Louis] awakened, breakfasted, spat, pissed, crapped, etc.” However, there is more to it than that. Conversations are reported verbatim, tantrums detailed, relationships with staff and family members tracked over time. The blurb for Marvick’s book says that the diary’s detail “makes it probably the most extensive record of the development of any individual – much less of an important political figure.”

And what fascinating – and often chilling – reading it makes. Louis was given the very 'best' care. This did not, however, involve parental affection:

‘During his early months [his mother] saw him infrequently and did not once embrace him until he was nearly 6 months old. The king was initially more demonstrative but gave up holding the baby after a week, when Louis nearly fell to the floor while being presented to his father on a velvet cushion’.
[Marvick, p.9]

However, whilst parental attention was lacking, that of the physician Héroard and numerous other staff was so intense as to be damaging. From the moment of birth Louis was scrutinised, worried over, his every bodily function interfered with. On the second day after Louis’ birth, Héroard became anxious that the baby wasn’t suckling properly, and called for a surgeon to cut the membranes at the base of his tongue in three places. Worrying next that the wetnurse couldn’t provide enough milk, the physician had extra women brought in, and Louis was fed until he vomited. When Louis was ten days old, Héroard became concerned that he hadn’t ‘voided’ for a long time, and gave him a suppository. In an age when enemas (and ‘vomits’) were considered almost a cure-all, Héroard was thought to be conservative in his use of them, but taking control of Louis’ bowel movements was to become a habit, and tracing the long struggle of Louis’ later potty training through Héroard’s account is fascinating.

Underlying this suffocating attention, of course, was terror shared by all the staff that the baby might die under their care. But Héroard’s aim was much broader in scope than that Louis should be physically healthy: he wanted to mould his future sovereign. For this, his job was ideal. Marvick tells us that he was ‘required by law to “be always near” his master, “at dinner, supper, on awakening, retiring, as well as at other times.”’

When Louis woke each morning, Héroard was standing at his bedside, ready to take his pulse. When the dauphin ate, Héroard decided not only the types of food to be eaten, but the order in which they should be ingested, as well as the exact quantities, even down to the number of mouthfuls or the number of grains. It’s no wonder that, as he grew up, Louis never sampled any new food that appeared on his table without first consulting his physician.

Héroard noted down the first time Louis’ blood was spilled (he cut himself slightly when a toddler), and the first time he spat. Héroard took seriously the spilling of any bodily fluids and was said, by a detractor, to disapprove even of sweating and nose-blowing (which seems to have had its effect on Louis, as will be seen below).

Héroard described in his diary how Louis played with his toys, how he talked to his nurses, and his strong attachment to some of his personal guards. Right from the beginning, Louis was made intensely aware of his status. His sister Elisabeth, 15 months younger than Louis, was taught to call him “Little Papa” and Héroard informed the boy: “One day, everything she possesses will be your gift to her.”


But, though Louis knew how to lord it over servants and siblings alike, there was one person who inevitably eclipsed him: the king his father. And for the first eight years of his life, Louis’ relationship with Henri IV was a hugely confusing one.

Henri was godlike in Louis’ eyes, and this was a god who was unpredictable. By turns playful and menacing, affectionate and taunting, Henri would treat his son kindly one minute, and ignore or humiliate him the next. Louis often had no way of knowing which sort of treatment to expect. Henri ordered Louis’ first whipping when the boy was only 25 months old, and told Louis’ governess:

“I wish and command you to whip him every time he is stubborn or does something bad… there is nothing in the world that will do him more good.”

Often Louis would be whipped soon after waking in the morning. Often he would be whipped by Henri himself. And those courtiers who were too scared to whip the heir to the throne would try to control his behaviour using ‘bogeymen’ figures of whom the child became terrified.

Louis was taught from toddlerhood to regard his masculine prowess (both sexual and military) as of vital – national – importance, and yet not even allowed to have control of the evacuation of his bowels. Héroard records how King Henri would at times boast to the (very) young Louis of his own prowess – and at other times take him into his bed and abuse him. As a small child, Louis did try to resist his father, but any sign of anger or defiance was met with vicious punishment. And so Louis relinquished his resistance, becoming passive and even servile with the king, and increasingly tyrannical with everyone else. He also developed a stutter, which, as the 1619 account of Edward Herbert (ambassador of King James VI & I to the French court) shows, was to stay with him for life:

“...his words were never many, as being so extreme a stutterer that he would sometimes hold his tongue out of his mouth a good while before he could speak so much as one word; he... was observed seldom or never to spit or blow his nose, or to sweat much…”

When Philippa Gregory was quoted online as having said the following, with regard to Henry VIII, she was expressing what seems to be a widely-held view:

Asking oneself about the psychology of a Tudor king is profoundly a-historical; it is like asking oneself as to their compliance with traffic signals – impose a concept on people who simply didn’t think that way, having not yet invented the theory.

But one thing this extraordinary account of a royal childhood shows us is that the fact that people didn’t “think that way” then doesn’t make the insights provided by psychology any less relevant. Paying attention to them seems to me no different from using modern medical knowledge to try to discover which diseases historical figures might have suffered from. No one, surely, could argue that Louis XIII’s childhood experiences would not have had a lasting effect on him.

So much, then, for this particular poor little rich boy. We cannot extrapolate from Louis' case too many generalisations about child-rearing at the time, since so much clearly depended on the character of his father and the particular culture of the French court. However, we can say that to be the ‘most important’ child in the kingdom is not – in any age – an unalloyed blessing and has been, at some moments in history, a peculiar kind of hell.

Happily, despite all the pressures of the modern media age, the prospects for 'Baby Wales' are much more rosy, if not without their own challenges...

H.M. Castor’s novel VIII – a new take on the life of Henry VIII, for teenagers and adults – is published by Templar in the UK, by Penguin in Australia, and will be published by Simon & Schuster in the US next month.

Great post, but, being a pedant, it should be "Baby Cambridge" not "Baby Wales"