I started off thinking I would write about Celia Fiennes. She was a late 17th century intrepid English woman who never married and rode around Spa towns for her health - alone. Of course she was not alone she had one or two servants at all times (you can read about her travels here.)

She lived the later part of her life in London around the corner from me although she was there from 1738 until 1741 and I 1982 until 2013 so we never actually met. 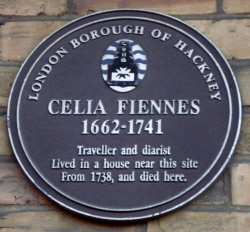 I don't know how many times I walked past this plaque, I read it thousands of times; it's on the wall of a modern carpet shop next to Iceland at the junction of Well Street and Mare Street in London. It's part of Hackney that has been ruthlessly ignored by the gentrifiers, an island of 1970s Hackney, still down at heel.  There are some clues that this spot might have once been the edge of the city, that there might have been big houses and market gardens rather than hostels and a giant LIDL. There's Elizabeth Fry's original safe house for women, a lovely Grade II listed pile that has been neglected for years, there's the name of the local estate - Loddiges - named for an ahead of his time gardener who built some of the largest glasshouses in England. And  just to the south a pocket of old houses that includes a different women's refuge, The Ayah's Home, which is actually the subject of this blog instead.

The Ayah's Home has its own plaque and a very different, sadder, history. It was opened in 1900 - which in the run of things is almost touching distance - by well to do Ladies who lunch disturbed that some other well to do Ladies were treating their servants abominably.

Ayahs were Indian and sometimes Chinese nannies, women who gave up any family of their own they might have to look after those of the wealthy English Sahibs and their families serving the Empire abroad. When these families returned to England their Ayahs would come too, taking care of the little ones on board ship for the long months of the journey home. Once back in blighty many of these Sahibs and Memsahibs abandoned their Ayahs and either employed English nannies or sent the children to school. The Ayahs were cut loose, abandoned in a city thousands of miles from home with no means of support and no way of getting home. Left destitute. This was obviously enough of a problem that the home was opened in a large leafy suburb in a large lovely house in South Hackney.

That's an view inside of the grateful Ayahs passing their time at needlework. Here they all are on the steps along with some- no doubt benevolent- gentleman of the city. The home remained open until 1926. Read that again; this was still a problem, families were still abandoning their nannies until 1926. I have no doubt British servants were equally ill used, cast off, exploited, abused in every way imaginable. But every time I pass the Ayahs' home I can't help thinking of those poor women abandoned so far away from home.


Posted by Catherine Johnson at 01:00

Sounds typical of the attitudes of the wealthy in those days, and I have no doubt there are still plenty of members of the upper crust who think their workers should be loyal to them but don't think the reverse should apply.

And no one sent them home to their own families? How sad!

Fascinating, & very sad. This should be better known - thank you for blogging about it!

I saw, not so long ago, a programme about well-off people who were hiring au-pairs and treating them in much the same manner. They treated them as servants and seemed utterly indifferent to their wellfare. One woman dropped her plans to meet her new au-pair at the airport, because it was too much trouble, and left a bewildered young girl, who could hardly speak English, to find her way to a small English village on public transport. - The ayahs were treated even worse, of course, but I'm making the point that people don't change. There were people then who recognised that it was cruel to treat others in this careless way - and there are people now who are still quite happy to treat others as disposable tools.

I had no idea - how saddening. Thanks for telling us.

I had no idea about the poor ayahs either; I only know the word from The Secret Garden. What a sad, sad fate.
I know about Celia Fiennes however and have her book England on a Side Saddle - it was very useful to me resaerching Bath in the early 1700s. Although unspeakably dull to read! :-)

The latest Maisie Dobbs book by Jacqueline Winspear, Leaving Everything Most Loved, is about this problem....

I didn't know about this tiny slice of history. I wonder where their descendants are now?

How sad. I'd heard of Ayahs, but not of them being abandoned on this way. I wonder if any of them were able to save up to get home?

Thanks for the comments - I really thought this was common knowledge, Tanika Gupta wrote a play about it a few years ago. There is loads of info, some were abandoned, some were travelling Ayahs - those who went back and forth and used the Ayahs' home as a club. Worth looking in to xc