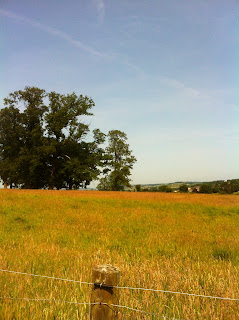 There are several advantages in being married to an itinerant cheesemonger. One is that because my husband, Ned, has a portfolio career in cheese, he also does some cheese making and that’s how we ended up spending a week on a farm in Somerset just as the weather got good.

Not sure about you guys, but once the high-as-a-kite feeling of finishing a novel wears off, I normally get very tired and usually slightly ill. It’s a pain, but it’s also part of the process. If you spend several months pushing yourself hard to write a decent book there will be payback, mental and physical. I recommend recovering on a farm while your husband makes goat's cheese. There now follows some of the reasons why.

Quiet. I live on a main road in London and while I was writing the book there were some buildings works going on nearby. This meant as well as the sirens there was a loud semi-continual beeping from cherry-picker cranes that was… well, let’s just say unhelpful. On the farm all I could hear was the sound of the wind in the trees, birdsong, twice a day the low thrum of the milking machines, goats bleating and the occasional pig. 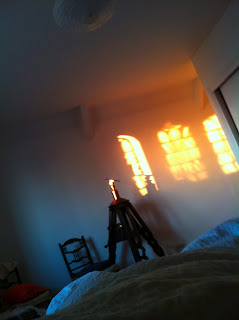 Looking but not needing to see. There are lots of things to look at on a farm, but no one is expecting you to comment on them, capture them in prose, work them into the fabric of your story so they have emotional and narrative significance as well as just being interesting in themselves, so you just get to look at stuff with your brain in neutral. There was something about the time of year that meant that at dawn we were woken by the light coming in through the neo-gothic windows, and it made an astonishing gold pattern on the wall opposite.

People, but not parties. I could lie out on the lawn and read, but there was enough activity, Ned, his fellow cheese makers, the owner and the other farm workers coming and going to make coffee, make calls and so on, so that I could remember I was a member of the human race, but I didn't need to be very proactive about it. Then in the evenings there was a chance for conversation and staring at the sunset, watching the light fade in the garden and listening to other people’s stories - mostly of travel and food.
Fresh reading. The farm is also full of interesting books I hadn’t read. 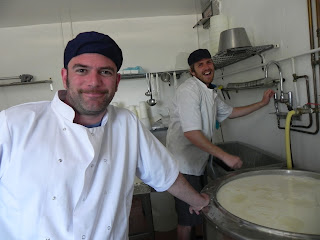 New things. For instance, watching the cheese being made, the sound of the whey draining from the curd as it knits together in little moulds. Or really looking at goats. Or being really looked at by curious cows.
So you relax and absorb it all, the light, the words the quiet and you let it settle in you. I also recommend having Radio 3 on in the background when you are doing the washing up.

I studied Russian at university, and lived there a year. I didn’t become a great Russian scholar but I picked up some new habits, such as the slightly flamboyant way I now write my capital ‘M’s and vodka, but the one I’m thinking of now is the superstition that before you leave your house to go on a journey, you should sit for a moment in silence. My Russian hosts explained to me this was so your heart/soul/spirit had a chance to catch up with you and come with you on your trip (it’s also quite a handy way to give yourself a chance to remember what else you’ve forgotten in the flurry). I thought of that again in Somerset - the importance of just taking time to be still for a minute. We need those periods of silence, setting your brain in a neutral gear, letting your rather weary heart/mind/spirit catch up with you again. 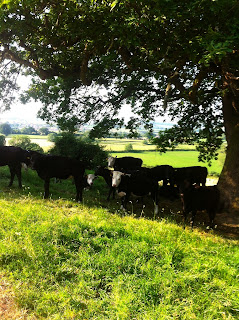 Just before we left Ned and I walked into the village and sat in the pub garden. I started talking to him a bit more about the next book I want to write, but in broken sentences, half-thoughts. Ned was tired and content just to listen and let it come at its own pace. Then he went back to the bar during a particularly long pause and when he came back with another cold pint of cider, I had a couple of pages of prose - a short monologue from one of my characters - in my note book and the feeling that some how I was catching up with myself again, coming back to myself in the sunlight and the breeze shifting the leaves above our heads.

Imogen’s latest book is The Paris Winter. It was short-listed for the CWA Historical Dagger 2013. Andrew Taylor won it, but that’s ok because his book is excellent and he’s very nice.

And here is some info on one of the cheeses Ned was making.
Posted by Imogen at 00:30

Just reading this makes me feel things unwind - thank you!

What a lovely post! We do that thing of sitting in silence before a journey....I have a Russian father in law but suspect I started doing it after some production of Chekhov seen in my youth....probs The Cherry Orchard.

Thanks both! It is a fine (and very practical) tradition.