What's On Your Desk? Celia Rees

Every summer, I go off to this place, Charney Manor in Oxfordshire, with other writer chums. This annual 'retreat' is open to all members of the Scattered Authors' Society www.scatteredauthors.org . Quite a few of the History Girls are Charneyites, including Katherine Langrish, Adele Geras, Leslie Wilson and Sue Purkiss, who sadly weren't here this year, and Mary Hoffman, Dianne Hofmyr, Katherine Roberts and Penny Dolan, who were (if I've missed anyone out, I do apologise). To the absentees - you missed a treat, girls. It was a vintage year, and not just the weather. It was inspirational. It has already inspired fellow History Girl Katherine Roberts to prompt her Reclusive Muse to blog about it on his  http://reclusivemuse.blogspot.co.uk

Katherine has written about using the Tarot to inspire writing, one of many excellent creative sessions, but I was intrigued by the introductory warm up session, devised and run by HG, Penny Dolan. We all had to say what we have on our desks. Everybody was different. Some people didn't even have desks. They worked on laptops wherever they happened to be, in the house or out of it or, in the case of Mary Hoffman on a settee and a coffee table. I know one person there who writes in bed, but she wasn't saying, so I won't out her. Quite a few people did work at desks but, even then, there were big differences. Some people had to have a view out of the window, others faced a wall. In Katherine's case, the Reclusive Muse can only be conjured in semi darkness. And then there were the desks themselves. Some were clear, others cluttered, some were for writing only, others were for other activities and seemed to be the length of an entire wall (I have to suppress my desk envy here).  Everyone was different, as individual in this as in their writing. For each person, their writing environment was important. They had to feel comfortable in it, before they could begin the process that would take them away altogether, to a place where they would cease to notice anything around them and their coffee would go cold, as mine is doing now.


Something else emerged here. A lot of us had things on our desks, or in our writing rooms, that had something to do with what we were working on, or had worked on in the past. Objects that had garnered an almost talismanic significance or importance, even though they would be meaningless to anyone else. Or, in some cases, just things that we like to have around us. Of course, when it came to my turn, I'd forgotten many of the things that are actually on my desk at the moment, subbing in things that had been there, but had been moved. 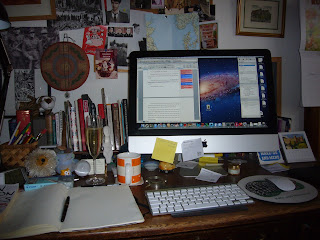 So, this is my desk, as of last night. I don't always have a glass of champagne on it but there is normally a mug of tea or coffee, full or empty (the glass got knocked over shortly after this picture was taken so now I have a champagne soaked diary). The wall behind the desk is also part of my writing environment. There is a noticeboard which has pictures, maps and postcards to do with what I'm currently writing. The wall around it has pictures and other things to do with past books. At the moment my desk holds: reference books, diary, notebook, basket of random pens and pencils, timer, little blue vase from Pompeii, a knitted lion (both presents from my daughter), a crystal  ball (The Fool's Girl), Cyclydian statue of the goddess (The Stone Testament), moonstone egg, assorted shells and fossils (because I like them), a gold llama (Stone Testament), a Liberty box containing beads (not in the photo - current project and also Colour Her Dead), a moon gazing hare (Witch Child), a magnifying glass without a handle that belonged to my father, a pot of tiger balm for headaches, a mouse mat from Gunter Grass' house in Lubeck which says Katz und Mauspad (current project), mini calendar showing scenes of Warwickshire. Oh, and my computer and keyboard.

Sometimes things have to be moved off and migrate to a different shelf. 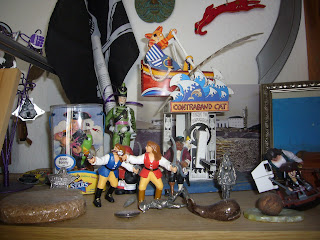 This is my pirate shelf. It holds the things that I collected when I was writing Pirates!. Sculking in the background is a soldier boy who just might be about to be promoted to desk top proper.

I know that these pictures will fill some people with horror, but I like having these things around me. They remind me of what I find most exciting about writing - having ideas, the process of creation, the books, the places I've made up, the characters I've grown to love.  There's not an award, a certificate, or framed review in sight.

I'm wondering what other people have on their desks. Anyone care to share?

The Guardian used to do a great feature called 'Writers Desks' (or was it writer's rooms, can't remember exactly) but it was always fun to see how different people worked. I'm a writing in bed person too, funnily enough (I bet there are lots of us out there!) - although I alternate it with the kitchen table!

I loved that session too, Celia! My desk is rather like yours, with objects relating to my work in progress and pictures on the wall. It has been known to sport a champagne glass as well!

A most enjoyable session - and I found it astonishing that some people did not need a desk or set space at all - perhaps their computer was their desk? But i seemed as if nearly every book written needed its own specific totem or object or image - or even a whole host, like your pirate collection.

However, I'm wondering whether that toppling champagne is marking the start of a new book or the end of a forthcoming one?

My desk looks a bit like yours Celia, with a noticeboard behind the screen that changes as I work.

At the moment my board shows:
Rhianna Pendragon's family tree, a tiny cover image of my "I am the Great Horse" ebook edition, a green fairy with my favourite Stephen King quote, a postcard of Avalon/Glastonbury Tor, a painting of the goddess Rhiannon riding her white mare into the hollow hills, a Charney handout from last year called "weathering the ups and downs of a writing career", a newspaper clipping called "5 rules for life", a list of Amazon ASINS for my Kindle books, my wish list for a current contract negotiation, and an attempt at my working schedule for July...

Probably no wonder my Muse prefers the place in semi-darkness!

I don't think a computer or laptop desktop can ever replace a real one. You have to be able to pick up objects and hold them - like you splendid elephant, Penny. I like the things on your notice board, Katherine - a mix of the esoteric, inspirational and practical but all special to you. It would be great to see you at Charney again, Adele. We need you for our quiz team!

Mine is just a mess of papers and books and odd items, rather like yours (but messier). And witha glass of wine and not champagne. But I have two desks - currently three as I have a special dinosaur desk (or four if you count the one in my college office!)

The desk of the moment has all the usual pens and papers, plus some old musket balls, scattered pictures that are on their way to the scrapbook for a new project, a plastic seagull (from Kathryn Evans), a few fossils, a tiny medallion of 'the queen of heaven' given to me by the nuns who guard the tomb of Lucrezia Borgia (I took Small Bint there, as she's named after LB), a drawing of Small Bint's design for her tattoo, photos of the bints when small, and The Rainbow Book of Nursery Tales. Oh, and a Virus Wars spinning thingy about virology that I picked up a couple of weeks ago at the Laboratory of Molecular Biology.

I have to confess to losng a laptop to a glass of champagne. When my techie was valiantly trying to safe info, he looked at me oddly and said... this laptop is saturated with a very sticky substance.