Novel-writing can lead a girl down strange research paths and this week I ended up in the Russian Museum of Telephone History  -  though only as an online browser, you understand.  How commonplace, I’d wondered, would domestic telephones have been at the time of Nicholas II’s coronation in 1896?  It was twenty years on from Alexander Graham Bell’s first patent being granted, and Queen Victoria had been a subscriber for years, but Russia? The answer was yes. Among the vast Romanov clan and the top drawer families of Moscow and St Petersburg telephones were quite the norm by the 1890s and I don’t mean two cocoa tins connected by string.  I’m talking about elegant candlestick phones, with a spring-loaded side hook for the receiver. 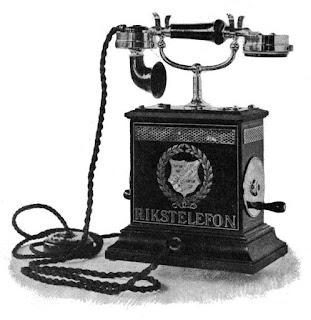 ‘On the hook’ and ‘off the hook’ are two expressions we owe entirely to an antique design of telephone. ‘On the blower’ is an even earlier expression from the days of that enviable domestic appliance, the speaking tube.  The tubes, or blowers, were used on business premises first and then taken up by the owners of large houses whose drawing rooms might be inconveniently distant from the kitchen staff. But the use I particularly like the idea of is the speaking tube connecting a chauffeur to the sealed passenger compartment of a car. How fabulous to be able to pick up the tube and say, ‘Be so good as to stop at Asprey’s, Jorkins. I have urgent need of a pearl stomacher.’


The telephone caught on pretty quickly in Britain in spite of the official view of the Post Office that it had a limited future, what with messenger boys being ten a penny. In 1878 there were 8 telephone subscribers in London. A year later there were nearly 200 with two phone companies offering competitive tariffs.


By 1884 trunk calls became feasible and so did making a call if you were out and about, or if you didn’t have a telephone in your private residence. Silence Cabinets were installed in places like railway stations. They were manned at first, with an attendant to help you make your call. And in London, most particularly in Westminster, it became possible to make a call even in the middle of the night. A politician’s domestic peace was breached, for ever. 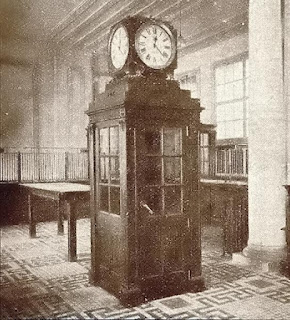 There are some delightful pieces of telephone history trivia. In the early days of cable laying phone companies consumer tested different types of wire on in-house hungry mice. An interesting career opportunity for a rodent. Then there was the question of how to answer your telephone when it rang. ‘Ahoy!’ was the first proposal, in the same way sailors would make contact with another vessel. In the 1950s people still announced the name of their exchange and number by way of greeting. ‘WIGSTON 2958,’ my mother would recite, very clearly but always in a wary tone, as though she feared the invisible caller might be up to no good.


Subscribers didn’t always have phone numbers though. Initially one would just call up the operator and say, ‘Get me that veterinary with the gammy leg,’ and the operator would say, ‘Putting you through. Your Rex still got the mange?’ It was an American doctor who came up with the idea of unique subscriber numbers. There was an epidemic of some kind in his town of Lowell, Massachusetts and people were dropping like flies. ‘What if the operator gets sick?’ he thought, the operator being the powerful creature who sat at the centre of the telephone network and knew every subscriber by name. And so was born the telephone number.


But to get back to the question of Russia in the 1890s. There were telephones in the Winter Palace and in the Alexander Palace out at Tsarskoe Selo, but Tsar Nicholas wasn’t keen on them. He became a great enthusiast for cars and for movies, but never for telephones. Perhaps, like my mother, he was nervous of them. Or perhaps it didn’t seem right to him that the Emperor of All the Russias could be summoned by a bell.  The Tsarina, who enjoyed poor health and often kept to her boudoir all day, loved the telephone. It’s said she even allowed her daughters to use it, though who those closeted dears might have called it’s hard to imagine.  They didn’t get out much.


There was a telephone line between St Petersburg and Russian Army HQ at Moghilev at the time of the 1917 crisis that led to Nicholas’s abdication but he declined to use it. He wrote letters, sent telegrams, dithered, smoked, and shunted up and down in his increasingly beleaguered train. One can’t help wondering if things might have turned out differently if some more enlightened members of the Romanov family had been able to pick up the telephone and tell him what to do to save the day. We cannot know.


But what I can tell you is that I’ve now added a speaking tube and a silence cabinet to my birthday wish list. I'm also considering answering my phone with 'Ahoy!'

Fascinating post! Love the idea of 'Ahoy'... And if you were speaking Czech, it means 'hi'...

So quite probably the Czechs do say 'Ahoy"? Fascinating post. It feels strange to think that if Czar Nicholas had been less worried by phones, perhaps the Russian royal family would have made it into exile instead of being shot and the whole Anastasia mystery wouldn't have happened! Of such is alternative universe fiction made. All the best with your current WIP, whatever it is.

Thank you, Harriet. Only among the History Girls can one hope to pick up a bit of colloquial Czech!

In my dim and distant youth of the early 60's, I was a legal secretary in Westminster. We had an articled clerk called Charles Clark, rich, but in the Bertie Wooster mode. He bought himself an old Rolls Royce with a glass 'privacy screen' and a speaking tube. I have happy memories of bowling down Pall Mall and Whitehall, squashed in the back with lots of lovely young men, shouting down the speaking tube at poor Charles Clark to get a move on. And he did! As Patricia Hodge might say, 'what fun'.