DEATH ON A PLATE and other stories from 1960, by Eleanor Updale

There's a well-recognised phenomenon, written about by Simon Jenkins, that everyone looks back to a golden age, and that for most people that age is about fifty before the time they are in.  I've just discovered an antidote, in the unlikely form of an old cookbook.
When my Scottish mother-in-law died, twenty years ago,  I inherited the contents of her kitchen bookshelf.  Mrs Beeton's Cookery and Household Management has found its way out of the box.  It's not the original, but the 1960 edition, and has some quaint vignettes of domestic life at that time.  If nothing else, some of the livid pictures of the food are enough to put anyone off: 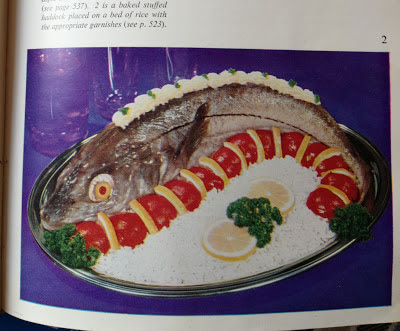 There are some faint rumblings of feminism (sections on women's property rights, exhortations for the housewife to find time for herself, etc) but 1960 is still a world of considerable domestic drudgery.  There's even a warning to beware of unexpected tasks generated by 'labour-saving' devices.  Washing machines make more ironing, and as for freezers:

While making it possible to conserve large quantities of produce, ready for quick serving when required, a quick-freeze cabinet does mean the housewife must cope with preparation of food to go into the deep freeze; and this must be done when the fruit is ripe or the chickens ready for killing; which often means a busy season for the housewife.

If you were going on holiday, you were advised to scatter the miracle chemical paradichlorobenzene around the edges of all your carpets, so the moths wouldn't start munching while you were away.
How times change.  This is the latest on paradichlorobenzene, from the Scottish Environment Protection Agency:

Oh dear.  It's a miracle so many of us survived growing up then.  Its reminds me of an early 20th century medical book, also passed on by Granny, which recommends cigarettes to alleviate symptoms of bronchitis.
But I bet a lot of things we are urged to do today will be exposed as laughable years to come.

The best thing about the Mrs Beeton volume is not what's on its pages, but what lies between them.  There are all sorts of recipes and press clippings stuffed in for safe keeping. 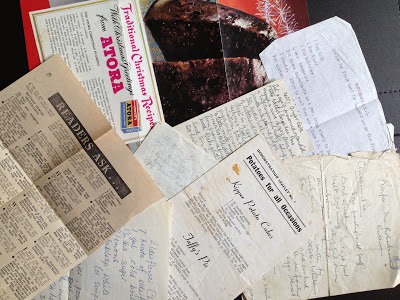 One cutting, sadly undated, is from the Aberdeen Press and Journal.  A reader has written in asking for a recipe for 'Buttery Rowies'.  If you've never been to The far North East, you may not have come across this breakfast delicacy, which is the source of immense local pride.  A 'buttery' is not delicate, and it is not good for you.  If you want to know why Scotland has the worst heart health in Europe, you need look no further.  Somewhat inappropriately, this one, auctioned on Ebay in 2006, raised £620 for the Royal Aberdeen Children's Hospital. 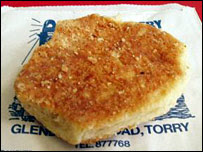 Here's the recipe.  Give it a try if you're feeling suicidal.

Sieve flour; mix yeast, sale and sugar.  Add to flour along with tepid water.
Set in a warm place to rise to twice its bulk.
Divide fats into three parts.  Roll out dough on a floured board,  Dot first part of fat over it in small parts.  Fold in three and roll out as for flaky pastry.  Repeat twice until fat is used up.
Divide into "Buttery" shapes* put on greased and floured tray, and prove for further 30 minutes, then bake in a fairly hot oven for 20 to 25 minutes.

NOTE: when working with yeast, all utensils must be warm.
*[ie rough lumps about the size of a man's palm]

Butteries do actually taste good, as long as the cook has used plenty of salt, and you eat them straight from the oven, before they turn to stone.  But the health news gets worse.  They are usually served slathered with butter and jam.
Good luck.

A postcard slipped into the book - not in my mother-in-law's handwriting, and possibly very old - has what looks like a pretty straightforward  recipe for Tasty Ginger Cake.  It sounds more appealing than the (perhaps fortunately) partly illegible Hawaiian Delight, a mixture of pineapple, walnuts, cake and double cream. 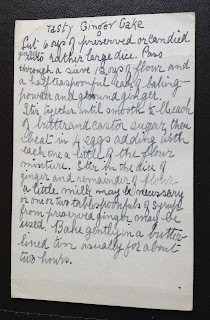 TASTY GINGER CAKE
Cut 6oz of preserved or candied ginger into rather large dice.  Pass through a sieve 12oz of flour and a half teaspoonful each of baking-powder and ground ginger.
Stir together until smooth 1/2 lb each of butter and castor sugar, then beat in 4 eggs adding with each one a little of flour mixture.  Stir in the dice of ginger and remainder of flour.  A little milk may be necessary, or one or two tablespoonfuls of syrup from preserved ginger may be used.  Bake gently in a butter-lined tin, usually for about two hours.
There's no indication of oven temperature.  I'd guess Gas Mark 5 or 375/190.

One of my favourites amongst the scraps of is POTATOES FOR ALL OCCASIONS, a leaflet from the Potato Marketing Board.  Perhaps the most interesting thing about that organisation is where it was housed -- in a grand building almost directly opposite Harrods in London. The nanny state in its heyday. At last, I understand where Mrs Thatcher got her passion for abolishing quangos. I wonder whether she turned her hand to any of the strange mix of the blindingly obvious and the downright weird on these four small pages (Taffy's Pie, perhaps, or Hopel Popel).  The stains on the paper suggest that Granny was a fan. 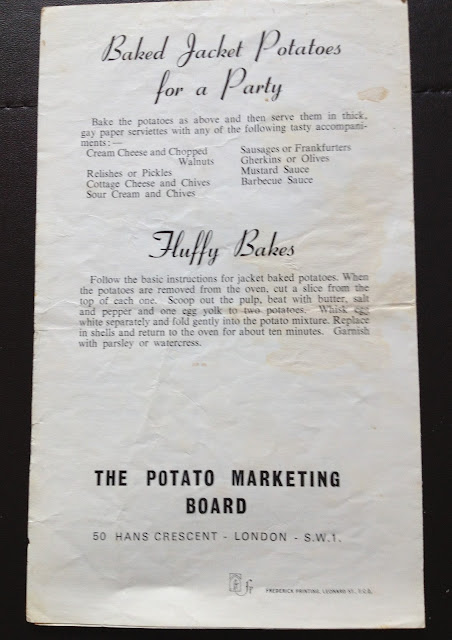 I might give some of the recipes a try, just for fun, but overall, I have to admit that I'm rather glad things have moved on.

I still have the equally garish GH Book of Entertaining from the early 1950s (TV suppers and Batchelor Girls get a mention). And a wooden card-index recipe file includes sketched designs and a guest list for my parents' wedding in 1947.

What fun! Your moth protection horror makes me think of the advice in the 1970s Reader's Digest encylopaedia of plants, which I still find useful - for some things. But not the advice to keep rose beds weed-free by using paraquat! The buttery rowies - have I got that right? do sound fit for a Hammer horror film. But only look at all the recipes still around that are bumping up things like macaroni cheese with inordinate quantities of extra butter and double cream. Why, why???