One of the great joys of historical research is the stumbling upon tales you weren’t looking for. Last week, I was researching the history of Greestone Stairs in Lincoln for my next novel. Greestone is reputed to be the most haunted street in the city. They are a long flight of stone steps which once linked the medieval dwellings in the lower part of the city, outside the city walls, to via the Postern or rear gate to which led into the Cathedral grounds at the top of the hill.

These steps are haunted by, amongst others, a Victorian woman and a monk who hanged himself from the postern archway. But perhaps most sinister of all, numerous locals and visitors alike have reported feeling someone grab their ankle as they ascended the steps, even in daylight, causing them to fall heavily and they have the bruises and cuts to prove it! 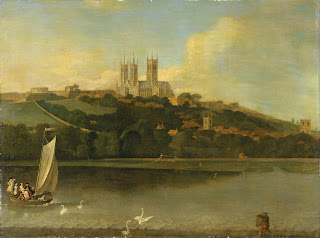 But when delving into the history of the steps and archway I came across an account written by A.F.Kenwick in 1928, which tells another story about the steps and postern gate –

‘... The cathedral towers, as well as the central one, were originally topped with tall spires of timber, coated with lead. The central spire had been blown down in a gale nearly two hundred years before it was decided by the cathedral body to remove those on the west towers, the excuse being that they had fallen into disrepair. The work of destruction was commenced on the 20th September 1726 or 1727. As the citizens in the town below saw the workmen engaged in this way, cries of indignation were raised, and towards evening a crowd of 500 men assembled to prevent the removal of the spires. The main gates of the minster yard were secured against them, but the small postern on the south side was apparently forgotten. To this the besiegers turned their attention, and, rushing up the Greestone stairs, they soon battered down the gate, and entered the close.

'One of "Old Vicars," named Cunnington, appears to have suffered especially at their hands, whether he was the chief culprit or not. He is said to have been dragged from his house in the Vicars' Court, and compelled to dance on the minster green in the midst of the mob. The crowd only dispersed on the promise that the spires should be allowed to remain.

'The next day, the Mayor and Aldermen were requested by the minster authorities to send the bellman round the city with the following message:— "Whereas there has been a tumult, for these two days past, about pulling down the two west spires of the church, this is to give notice to the people of the city, that there is a stop put to it, and that the spires shall be repaired again with all speed.” After which the mob with one accord gave a great shout, and said, “God bless the King!” …

'A foolhardy feat was performed in the year 1739 by a man named Robert Cadman, who did fly from one of the spires of the minster, by means of a rope, down to the Castle Hill, near to the Black Boy public-house. Cadman met his death in the next year at Shrewsbury, while attempting a similar performance there ...’

The spires were finally removed in 1807. I wonder if forcing planners today who make unpopular decisions to ‘dance on the green’ would encourage them to think again!
Posted by Karen Maitland at 00:30