History Girl on holiday with her guy

So it’s holiday time, and all too often the long-suffering Mr B is dragged off on what actually is a thinly disguised research expedition for a book. This requires him to plan and book the trip and accompany his HG to photograph sundry relevant locations. Obligingly he reads up on the chosen historical period and does some preliminary digging; e.g. finding, among the trenches of the Western Front, the exact position occupied by my soldier in Remembrance . But, in truth, he’s a man of Science. The mind, Mathematical, the profession, Physics

For The Medici Seal he inspected anatomical specimens in Pavia University where Leonardo da Vinci studied anatomy. In Andalusia he shuddered his way through a Museum of Torture while I garnered info to write a scene in Prisoner of the Inquisition. Whether tramping over soggy moors to one of Bothwell’s Border strongholds to add to the Spy for the Queen of Scots notebook, or driving round every stricken Chateau (his words) on the Loire to augment my knowledge for The Nostradamus Prophecy, nary a complaint passed his lips.

But this year, with the latest book sent off to the editor at the end of May, I enquired sweetly as to where HE would like to go - with a guarantee that no book research would be done. I would carry no notebook (well only the teeny-tiny one I always keep about me somewhere). I would refrain from droning on about the intricacies of life at the French Court during the middle ages. I would ask for no difficult photograph to be taken as in: ‘I know we’re in Flanders fields and the sign has a skull and crossbones on it darling, but if you just shoved the camera through the barbed wire….’ (He rightly refused to consider that request)

So here they are:

I have to confess that I saw more copies of Fifty Shades of Grey on display as the holiday read of choice than a book about a distinguished Scottish scientist.
Mr B. was unconcerned: ‘Lord Kelvin was an exceptional physicist – do you know that absolute zero is minus 273 on the Kelvin Scale?’

The Guide in Croatia’s National Park was quite startled to get a positive response to her enquiry: ‘Has anyone heard of a Croatian scientist named Tesla?’ You-know-who’s hand shot up. And he could ADD information to her spiel with the riveting fact Tesla had established a working hydro-electric power station before the one at Niagara Falls was operational. So, while the rest of the party focused on the iridescent butterflies and swimming turtles, we beat a path to the site of Tesla’s original (now updated) Power Station.

A Ferry ride in Montenegro elicited interesting observations about propulsion, and displacement of water.

In Dubrovnik our companions in the cable car ooohed and aaahed at the fabulous panorama of the Adriatic unfolding before their eyes.

My guy marvelled over the mechanics of the system which prevented us from crashing down the mountainside.

The eve of departure and time for a quiet drink over dinner.  A sip of sparkling water? Nothing of note there.  Ah, but the pip of the lemon, seemingly of its own accord, is constantly rising and falling within the glass. Why, you may ask. Well it would seem that the bubbles cling to the pip causing it to rise. On reaching the surface they dissipate, causing it to fall. Indeed the action of the bubbles could be reasonably compared to those in a Hydrogen Bubble Chamber used for tracking sub-atomic particles. Now you know. 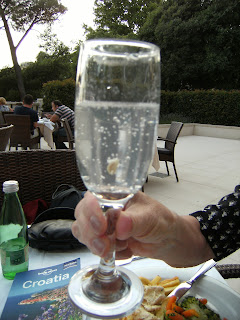 We eventually got to drink our water and some cool Croatian wine.

He had a great time. So did I

P.S. When unpacking I opened the teeny tiny notebook and found I’d scribbled a few words.
There may be a story from that trip after all…

Lovely post....I'd forgotten how HANDSOME your husband is!

Awwww... thanks Adèle I tell him that - although it might make him impossible to live with for a while!

How very nice, to have your own resident scientist!

It is Sue, and I found the scientific observations when drinking a glass of water hilarious - it led directly to a whole spiel about the Hadron Collider! I've learned to think twice before asking the question 'Why?