I am rather pressed. I am going away. Yippee!

As a girl, I had one of those square flower presses with twiddly screws in the corners, and passed my innocent afternoons trying to recreate the beautiful little 'memento of Jerusalem' postcards I had bought for my mother in Portobello Market, with their biblical verses, delicate grasses and tiny dry Holy Land flowers. Our garden daffodils were not so exquisite, and some flowers I swear are unpressable: roses for example. Nothing could be harder to press than a rose. Even those German Nuns who embroidered their own hair in nonenarbeiten of the highest class would have been sore put to press a rose.

I thought nothing would be harder to press, until I went to a rather vast and Norfolky house in Norfolk, belonging I believe to a very distant cousin on the Gurney side, where on a shelf above the Wellington boots I found some very wide books. The spines were very wide I mean; six or eight inches. The books themselves merely pretty big. I can't recall how many there were. Quite a few. They were bound in some kind of dark green cloth, shiny and faded, and looked old. Nineteenth-century say.

My dear ancient cousin (it was not her house, it was her cousin's. She had merely slipped me in the back door) took one down to show me. The cover was not very hard; not a normal binding. It seemed like cloth stretched on a thick wire frame. The pages were not many: light rough canvas, faded and foxed, stretched again on a frame of thick wire. And on each page, a bird. Not a picture of a bird. An actual bird. Pressed.

I don't know how you press a bird. Presumably you pull out the skeleton. I think it must be like preparing the skin for taxidermy, which you do by slitting it down the middle, and then sort of peeling it off and turning it inside out. (I know this because I stuffed two white mice at a taxidermy class recently. I won't be doing it again. They had tiny paws, and tiny little tongues.)

But then instead of stuffing this empty bird, you mount it in a book. Why? Because every surface of your vast and Norfolky house - horizontal or vertical - is already laden with stuffed creatures of all kinds: hogsheads and antlers on the walls, seascapes of terms and pintails in dusty cabinets with ancient bits of coral, dogs, squirrels in waistcoats, the odd tyrannosaur and dodo.

One of these birds was labelled: 'The last bittern to be shot on (I can't recall the place name - Something Broad), 1843'. I found this one of the saddest things I had ever seen. And I suppose it explains why 80 years later my grandfather, bird-spotting in the same neighbourhood, could send his wife-to-be a postcard saying, 'I will spot a Bittern, or catch cold in the attempt'.

But why would anyone press a shark?

Dig a shallow hole in gravelly sand. Gut and behead a Greenland or basking shark and place it in the hole, with its belly-cavity supported by a slight mound. Cover the shark with sand, gravel and stones. The shark's fluids (including its poisons) are thus pressed out of the body. Leave it for six to twelve weeks (depending on the season) to ferment.
Remove your shark from its hole. Cut it into strips and hang it up for several months, until it is dry. A brown crust will appear: remove this before cutting the shark into small pieces and serving.

It's called Hakari, and comes from Iceland (or probably stays there, let's be honest). It is taken with hard liquor, and associated with being a hard man, and Anthony Bourdain called it the single worst most disgusting terrible-tasting thing he had ever eaten. Here it is, hanging up. 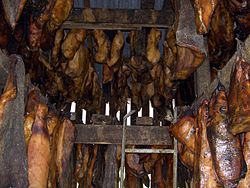 The modern method is just to press the shark's meat in a large plastic container. Great.

Oh my God this is horrible, and completely brilliant! I can positively smell the dried-up Norfolky house stuffed with death, pressed or otherwise. Surely a short story in there? The shock of taking down a vast dour volume of something Victorian and finding a whole pressed bird inside, all flat and feathered and beaked...

my only useful answer to this has to be,
no TV.
I think much of the strange and wonderful things our ancestors did was because of no TV.
think of it, locked in your home mid-winter, snow up to your eyeballs winter winds screaming about the place. what else are you going to do to pass the time? speak to your spouse? She's probably busy trying to make that shark palatable.

Amazing and weird....got to put it in some fiction. But even stranger, what were you doing in a taxidermy class Louisa?
Marvellous post...

They have a whole cuisine of repulsive things in Iceland -- dried fermented shark is NOT the most unappetizing local favorite! (You can look it up, but I advise not after you've eaten!)