Eight people who I never knew, but they are crucial to me, and part of me; I carry bits of their bodies around with me. And there are other things I wouldn't know about; mannerisms, foibles - all part of the genetic heritage that was passed on to me through my ancestors.

I think ancestors must begin with great-grandparents, though perhaps not if you knew them. But all of these people died well before I was born; indeed, two of my great-grandmothers, I know, died before my mother was born.

The Bakers, my father's grandparents, are the ones I know least about, because my father never knew them. Great-Grandad Baker, I know from my aunt Mollie, was a coastguard at Gosport. The story she told me was that one day he came into the coastguard station and found his colleague hanging there, having committed suicide. The man had been an alcoholic, and my great-grandfather forthwith foreswore all alcohol. Whether he subsequently became a Methodist (my granddad Baker was) or whether he already was, or whether it was his son who joined that church, I do not know. Of Great-Grandma Baker, I know nothing at all.

My other paternal great-grandparents were Henry and Ellen Jacques. Here they are.
﻿﻿﻿
Henry Jacques was born in Liss, in Hampshire, in 1833.  Family tradition has it that he was of Huguenot descent. He began his working life as a porter, then became a maltster, which means that he treated barley with malt to brew beer. Later he became a signalman at Midhurst, Sussex, but three railway lines went through Midhurst, and I don't know which one he worked for. My father remembered him as a quiet, retiring man, and he died when Dad was still young, of dropsy - maybe heart failure? But his smile, and his stance on this photograph make me think of my father.

Ellen was twenty-five years younger, born as Ellen Norgate in the pretty village of East Meon in Hampshire in 1858.

We visited East Meon the day after our daughter's wedding: curiously she chose to be married in Midhurst, in the Walled Garden, Cowdray, without any idea of the family connection with the place. When Ellen Jacques lived at 6 Station Road, Midhurst, Lady Cowdray used to graciously call on her - so maybe she was a tenant of the Cowdray Estate. Anyway, Ellen's mother, Ann Norgate, had a whole string of children, with nary a father listed for any of them. Whether this meant that the father had disappeared, or that they all had different fathers, or that they just didn't want to give the money to the parson, I have no idea. When my father was told this (as a result of my brother's family history research) he sat there gobsmacked, saying: 'But Grandma Jacques was always so respectable.) When she came to visit her daughter's family, she used to ask my father how much money he had in his money-box, and then double it, which was an incentive for him to save. Much later, when he was a young man and his father died (which he did when Dad was 17) my father cycled over to Midhurst from Bristol and stayed with his grandmother in her cottage. Ellen has passed on to me and to my brother her cheekbones, and also I think my eyebrows and eyes are like hers. There is also a look about her face that makes me think of my daughter Kathy, the one who was married in Midhurst. There she stands in her pre-World War One costume, decent black, with the little brooch at her neck. She lived to see that war, but not the Second World War, and was an old woman in the between-the-wars era we love so much to read about nowadays.
She and her husband were married in the impressive church at East Meon, and there, I guess, she was also baptised, in the wonderful font which was brought to England from Tournai, which is now in Belgium, in about 1130-40. 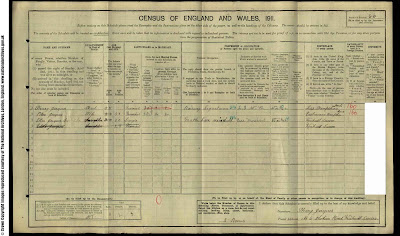 Here is the census entry for the family in Midhurst, in 1911. My great-aunt Nellie was then a 'Malta Lace Assistant' - she must have sold Maltese lace (fascinating that the shop sold enough for her to specialise); she later married a soldier, my father's Uncle Sam, who she reclaimed from 'a life of vice' though what that vice consisted of my father never managed to find out.

So here are my Roesel great-grandparents. Gustav (who my mother said was a postman, but who appears on a census as a mason - but people in mountain areas often do several jobs) was born in 1866, eight years after Ellen Norgate, in Loewenberg in Silesia (now Lwówek Śląski, Poland). My mother remembers him as a forthright, rather crusty old man, who didn't like the Nazis. Maria Roesel was born in 1870, but where I do not know. I only know her birthdate because she appears on an application for a visa to transit Belgium on the way back from England to Germany, which my grandmother had to fill out in 1951. My mother kept it, probably because of the family data, and now I have it, though it is gradually separating into two halves. My great-grandfather moved at some stage to Giersdorf/Podgorzyn, where my grandfather was born. Maria died when my grandfather was quite young, of TB, but my mother was thought to resemble her. Luckily she didn't inherit the protruberant ears, which she passed on, as the photo shows, to Martin and my grandfather Bernhard. I do remember Opa's sticky-out ears. My mother didn't have the beetling brows either, but Maria may have looked a lot prettier when she wasn't having to sit still for ages for a photographer, with a wriggling baby on her lap. If my mother got her straight nose from Maria, that is where mine comes from, too. When we went to Podgorzyn (once Giersdorf) in 2010, I left some sweet rocket flowers for her in the flattened graveyard of the one-time Protestant church, where, presumably, her bones are laid. We also ate in the inn in Podgorzyn (sorry, there should be an accent on the second o, and I can't put it in here) beneath the nest of a stork whose ancestors may well have nested there when my great-grandparents were alive. 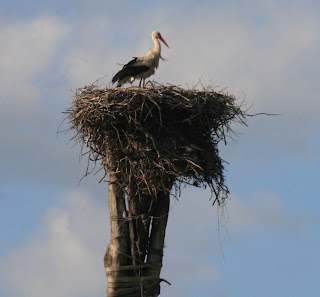 The land they lived in is now Poland, rather than Germany, and the people who came there were expelled from their own homes in the Polish Ukraine. Maria never experienced that upheaval, but Gustav was deported from Giersdorf after the Second World War, and my grandfather tried hard to persuade him to come to the Rhineland to join him. But he refused to come, because he didn't want to believe he wouldn't ever see his beloved mountains again, and he died in a displaced persons' camp in the Russian Zone. Just one of many such stories, as whole peoples were moved about after the war. It does make me sad.

His life, however, was like something from Heidi. He was a mountain man; he bred Saint Bernard dogs, one of which was my mother's especial friend when she was small. It was quite normal in winter for the snow to engulf the ground floor of his house; my mother remembered going to visit him and exiting her bedroom window on skis. He kept goats (I have a photograph of my mother in a basket with a kid) and milked them - or maybe Maria did that. He'd have chopped huge woodpiles for the winter, as you can still see in Alpine villages, and she - or his second wife - would have put up fruit and vegetables in jars. When the Poles arrived after their horrific journey from the Ukraine, they were delighted to find all the preserves, and the houses so tidy and well-appointed. Though I gather, from what I was told when we went to Silesia, that it was hard for them to settle down; they always thought the Germans would come back, just like my great-grandfather. I think now their descendants feel more at home, and that is a good thing. 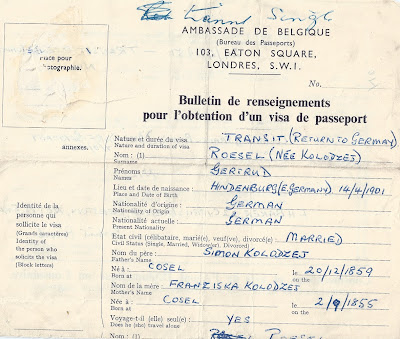 Here, from that same transit visa application, are the names and birthdates of the Kolodzej great-grandparents. Kolodzej is a common Polish name, incidentally, and means Wheelwright. Franziska, I see, was older than my great-grandfather Simon, and both were older than my mother's paternal grandparents. Franziska also died of TB, as did two of her daughters, my great-aunts.My grandmother was seven when she lost her mother. Simon and Franziska were both born in Cosel, now Koźle, near Opole in Upper Silesia and they were Catholics. I know nothing of Franziska beyond the fact of her death, but my mother remembered Simon as a gloomily religious man, pro-Nazi, antisemitic, and scary. He went to live in Zabrze, where my mother was born, and where he managed an iron-works. I think he had money, which he put into property because he was convinced that was safer than investing on the stock market. He was wrong, though his descendants put in an application, post-war, for restitution of at least one of the dwelling-houses he rented out. I guess they got it. I have the form, again, which has more family information on it. I don't know when Simon Kolodzej died, but I think it was before the end of the war. He remarried, after Franziska's death. His second wife had been sent as his housekeeper from a convent; she was no aristocrat, however, as in The Sound of Music, but a foundling who had been abandoned in a basket at birth, and it was considered a scandal that such a well-off man should marry someone with such a shady past. I have never found any record of her children, though, nor did my mother talk about them, so I guess the marriage was childless.

They lived in a world quite different from the one that we live in, and I sometimes wonder what any of them would have thought, if they had known how their genetic material would travel and mix up; it is a long way from Hampshire to Silesia. And in the next generation there came in Northern Irish protestant stock, from my husband David, and now my three grandsons descend on their father's side from Scots and East End Jews. One of my nieces has a British husband of Asian ethnicity. But that - as I said two months ago on this blog - is what being British is all about!

All colour photos by David Wilson.

Maybe simply lame to say--I love this post...just love it. That's all.

Maybe simply lame to say--I love this post...just love it. That's all.

This is fascinating - real history where it starts!

I was intrigued to find ELLEN (POLAND ) NORGATE. She happens to be on my tree linked to the Beasant family. She was born in Hambledon Hants 1858. The only information I have is that she was the daughter of JOHN HOOKER & CHARLOTTE BEASANT.

Perhaps you could let me know if I am on the right track?? Are we related?