YESTERDAY....Part 1: THE INTERVIEW by Adèle Geras 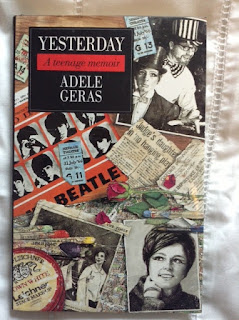 This year, a whole lot of 69 and 70-year-olds will congregate at St Hilda’s College to mark the 50th anniversary of our Matriculation and I reckon half a century ago counts as Proper History. Below is a section of our Freshers’ Photograph. The whole photo takes up too much space, so I cropped it about a third of the way along the rows. This brings tears to my eyes when I look at it and remember the way we used to be. We were young. I'm second from the left on the front row and on my right is the clever-looking Helen to whom I refer in the short piece below. I’m going to use this post and the ones for August and September to put up on the History Girls blog three extracts from the book which has been out of print for a long time. 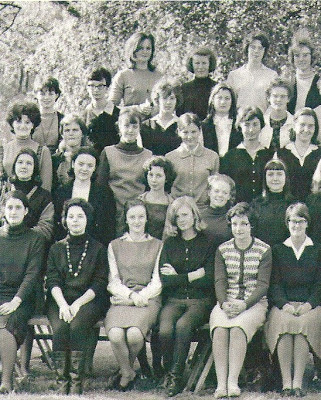 The first piece is called: THE INTERVIEW
(The only thing you need to know is that ‘Michael’ refers to my then (not terribly serious on his part) boyfriend, who was at Cambridge.)
I was allowed an afternoon off from school to go to town and buy myself a suit for the interviews [at Oxford and Cambridge] My mother, who has wonderful taste, was far away in what had been renamed Tanzania, and left to my own devices, I ended up with a soberly-cut affair: straight skirt (straight skirts are slimming, aren't they?) and plainish jacket (didn't all magazines advocate simplicity, the classic, timeless elegance...blah-de-blah?) but in an eye-blistering emerald green with all the subtlety of plastic grass. Well, I thought, green suits me. Looking back, I can see that I must have seemed like an extra from a bad production of Finian's Rainbow, but at the time I sincerely thought I was knocking them for six with my stunning apparel.
I bought myself some cigarettes at the station on the way to each of my interviews. I felt grown-up. I read through my French and Spanish textbooks on the train, making sure the covers were visible to everyone. I wanted all the other passengers to know where I was off to, to realize what an exceptional person was travelling with them. No one even looked at me, of course. To them I was just a podgy schoolgirl in a pea-pod of a suit.
Of my Oxford interview, more than anything I remember the bells, ringing out from this tower and that all through the night. The room I stayed in was in a building called Hall, which looked out on to the river. I liked St Hilda’s immediately. There was a wonderful sweeping staircase in Hall, and the rooms were high-ceilinged and quiet, and everyone else at the interview seemed friendly. I met a girl called Helen, who was from London and looked clever. How do you look clever? Well, you are thin and intense, and having dark hair helps and the finishing touch is purple smudges under your eyes. It’s hard to appear a diamond-sharp intellectual with a chubby round face and rosy cheeks. Helen and I walked round Oxford, and I fell in love. Nothing had prepared me for the physical beauty of the town. I walked around with my mouth open and my neck twisted round, trying to take in everything at once. By the time we got back to College for supper, I’d decided. This was where I wanted to be, and so much so that I’d have been very upset if I’d had to go to Cambridge or RADA instead.
Michael was unflatteringly philosophical when I told him I wouldn’t be going to Cambridge after all…… I had been awarded a Scholarship, (and so had Helen) and was therefore entitled to wear the long, black Scholar's gown. I thought I would look dashing and striking.
I sent a telegram to my parents with the good news, and found it carefully folded into my father’s papers after his death ten years later. My mother told me it had remained stuck in the frame of his shaving mirror for months.
Posted by adele at 07:30

What a wonderful photo. Thanks, Adele. Now I want to know what happened to every single one of those girls.

I wonder how well we'd do if we guessed their fates? Some look like schoolteachers, but perhaps they decided to join the circus, istead.

Lovely -- thanks Adele. I too want to know what happened to them all. Look forward to hearing more.

What a lovely personal memoir - thanks for sharing it. x

Ah, I should love to read this - will look forward to the next installment! 'Towery city, and branchy between towers...'

Your Dad sounds like mine. He was so proud of all of us!

Thanks for all your comments...and yes, Kath, I love that poem so much..

I matriculated at St Hilda's in 2004, with no idea that Adele (an author whose novels I had already discovered and enjoyed) was an alumnae! Really proud to find this out.

I hope there will be a follow-up post about the reunion!

I read this book when it first came out, and loved it! It was part of an autobiographical series that seemed such a good idea, and so interesting - I wish it would come back into print. I especially loved your book, Adele, as we are contemporaries and my own teenage years were so different.