A Man Who Looks On Glass - Katherine Langrish 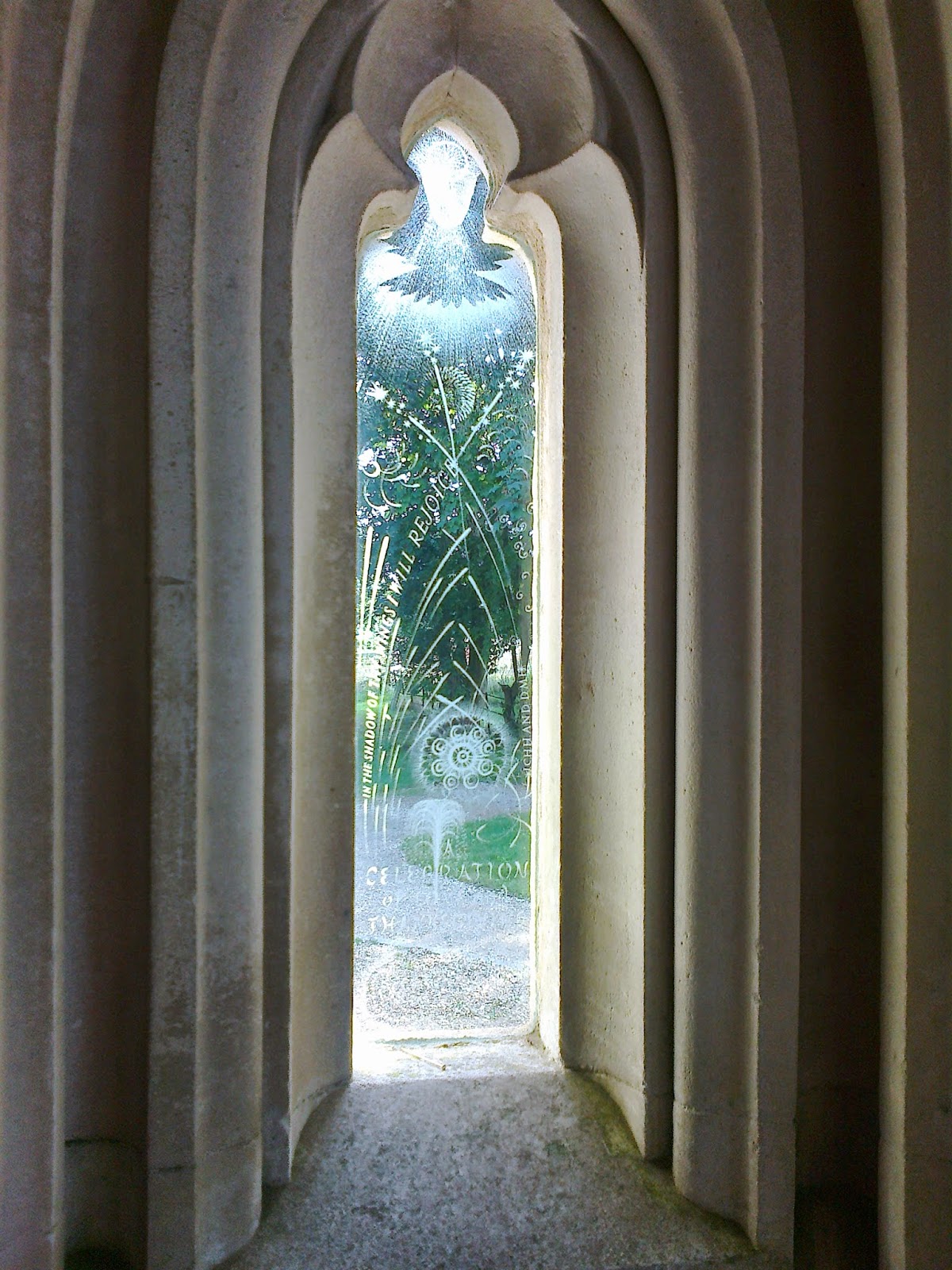 A hymn we sang at school was George Herbert's poem 'The Elixir,' set to a simple tune.  One of the verses which always stayed with me was this:


A man that looks on glass,
On it may stay his eye;
Or if he pleaseth, through it pass,
And then the heav'n espy.

I liked the deceptive simplicity of the verse, the obviousness, it would seem, of the notion: you can look at glass or through glass.  The success of Herbert's poetry is partly in his ability to articulate things we feel we have always known but never said so well. Light can pass through glass, yet glass can also obscure what is behind it. St Paul's words  'now we see as through a glass, darkly: but then face to face' must surely have been in his mind as he wrote that verse. For Herbert, God was the light behind the glass, the light which illuminates the world.

Last September I visited for the second time St Nicholas' Church in Moreton, Dorset, which has a complete set of windows engraved by Sir Laurence Whistler. The church was almost destroyed by a bomb in the Second World War and had lost all of its original stained glass windows.  After the war the church was rebuilt and the windows replaced by opaque, coloured glass panels, which the congregation disliked. Here is Whistler's own account:

"I believe that the first external windows on a church to be filled with engraving were those to my design put into the apse at Moreton, near Dorchester in Dorset, in 1955. The origin ... was a visit to Moreton by Howard Colvin, the architectural historian, at a moment when there was a debate on how to replace the ugly semi-opaque glass installed during reconstruction after the chance bomb of 1940.  He had discovered in two Oxfordshire churches (Great Coxwell and Pusey) small panels engraved with coats of arms, unaccountably inserted into old windows in 1795, and unique in window-history. Because the surroundings to Moreton Church were delightful, he suggested that I should do something of the sort; however, I proposed a full-scale treatment.  The architect was all against it, and in favour of stained glass.  The parochial church council was ultimately for it, by a single vote, it emerged - one member of the opposition having gone to Dorchester to shop, that afternoon."

By such a slender margin these beautiful windows were born, and Whistler worked on them over a period from 1955 to 1984. 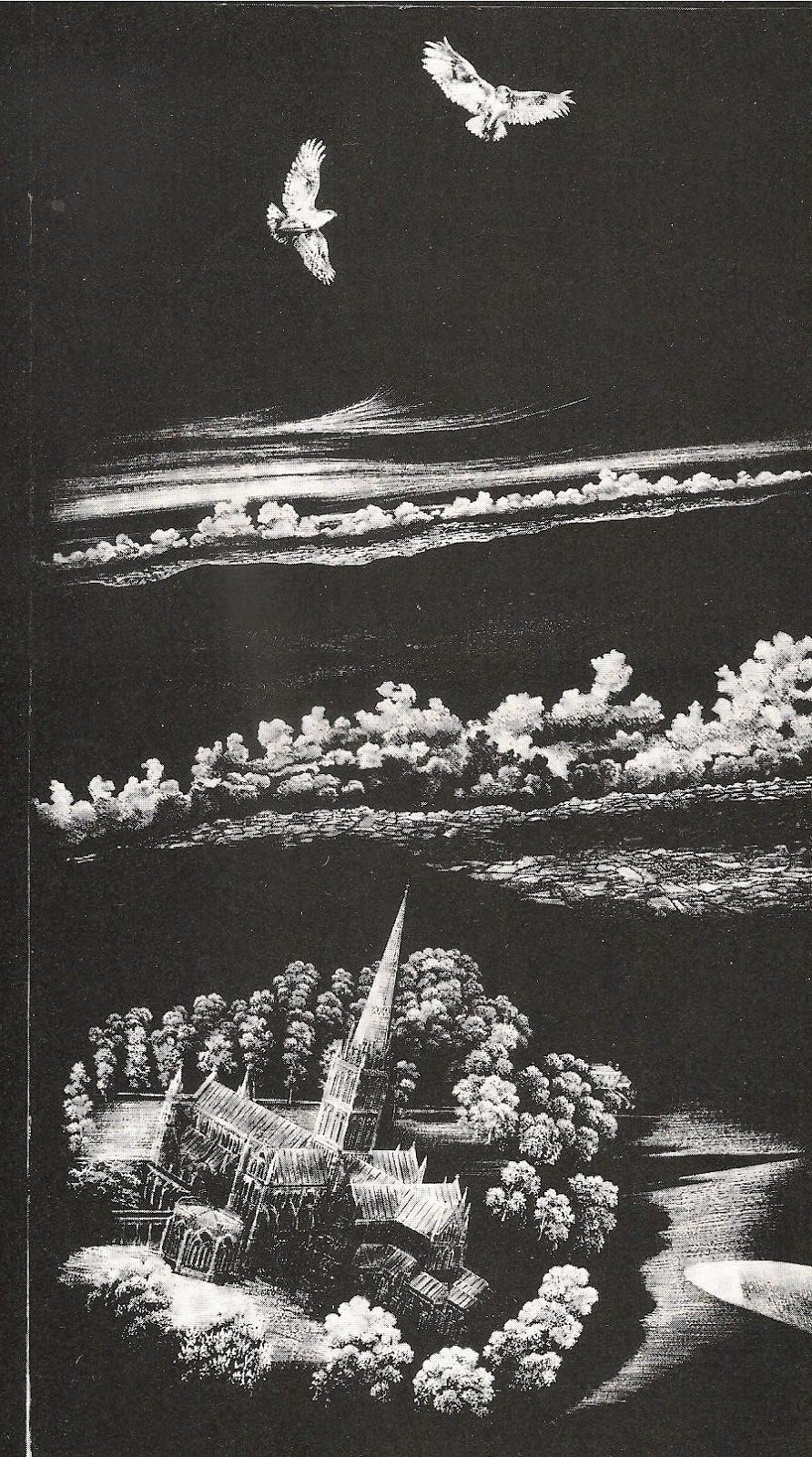 In the beautiful Trinity Chapel window, above and (detail) left, the theme is "fruitfulness in sunlight. In groups of three, blossom, insect-life and animal-life expand under strokes of sun and rain. These slants form an X, turned by two vapour-trails into a chi-ro, the first letters of Christos.  For the window commemorates an RAF pilot shot down in the Battle of France in 1940.  Salisbury Cathedral, near where he was stationed, and his cottage-home are seen from the air, with the English Channel and the French coast beyond.  Two pairs of initials and the years of a brief marriage are inscribed on the broken propeller."

"No general scheme was formed at the outset," Whistler wrote, "but light was always the theme, in the form of candlelight, jewel-light, starlight, lightning; while over the years the instances of light showed a certain thematic expansion - as from candles to a spiral galaxy - and this was matched by a certain loosening of style." 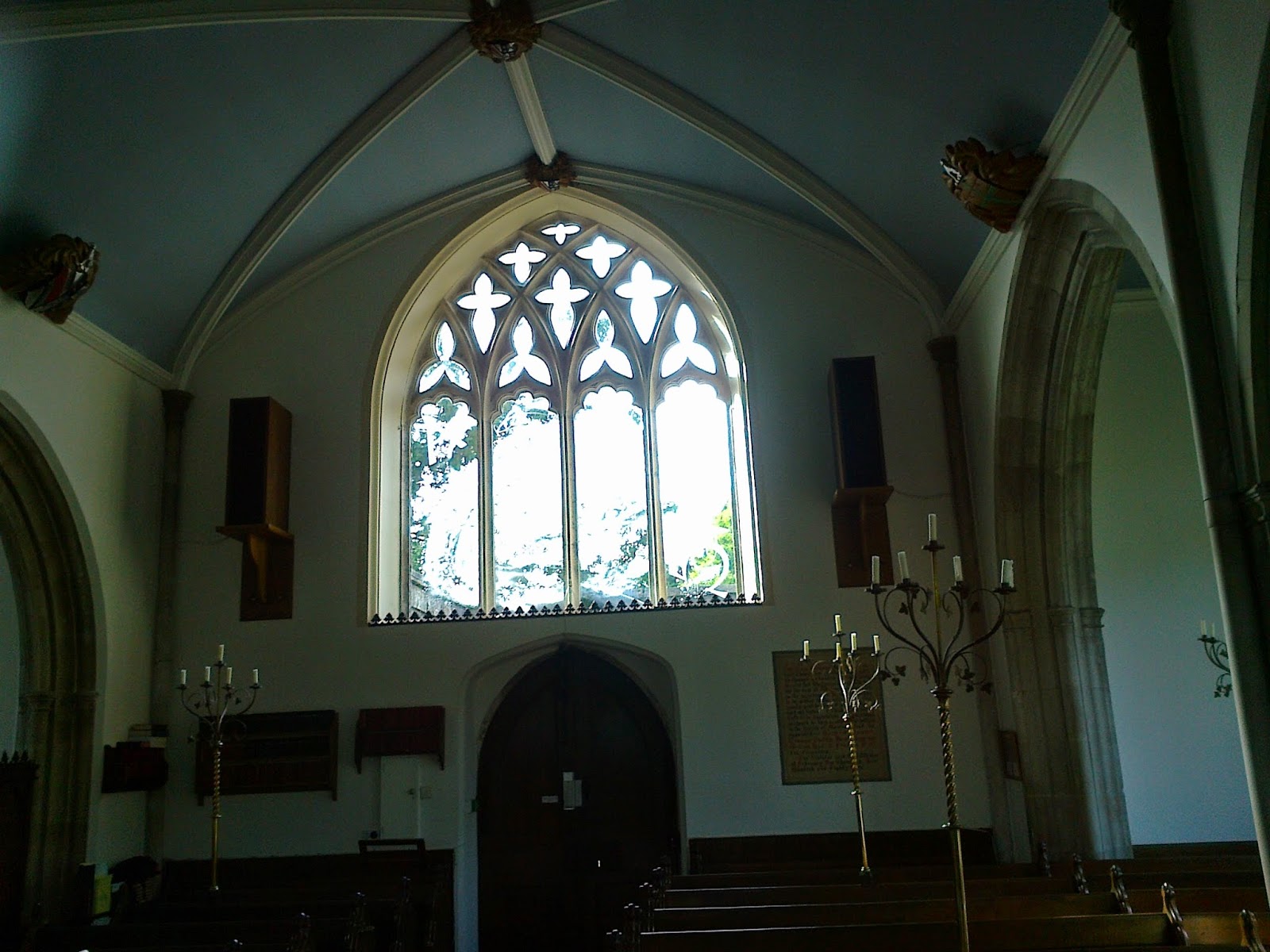 In this photo you can just about see the great spiral galaxy in the west window: the sunshine came blazing through it in a way which made it glorious to view but difficult to photograph: and though the black and white photo below shows the design more clearly with its Alpha and Omega... 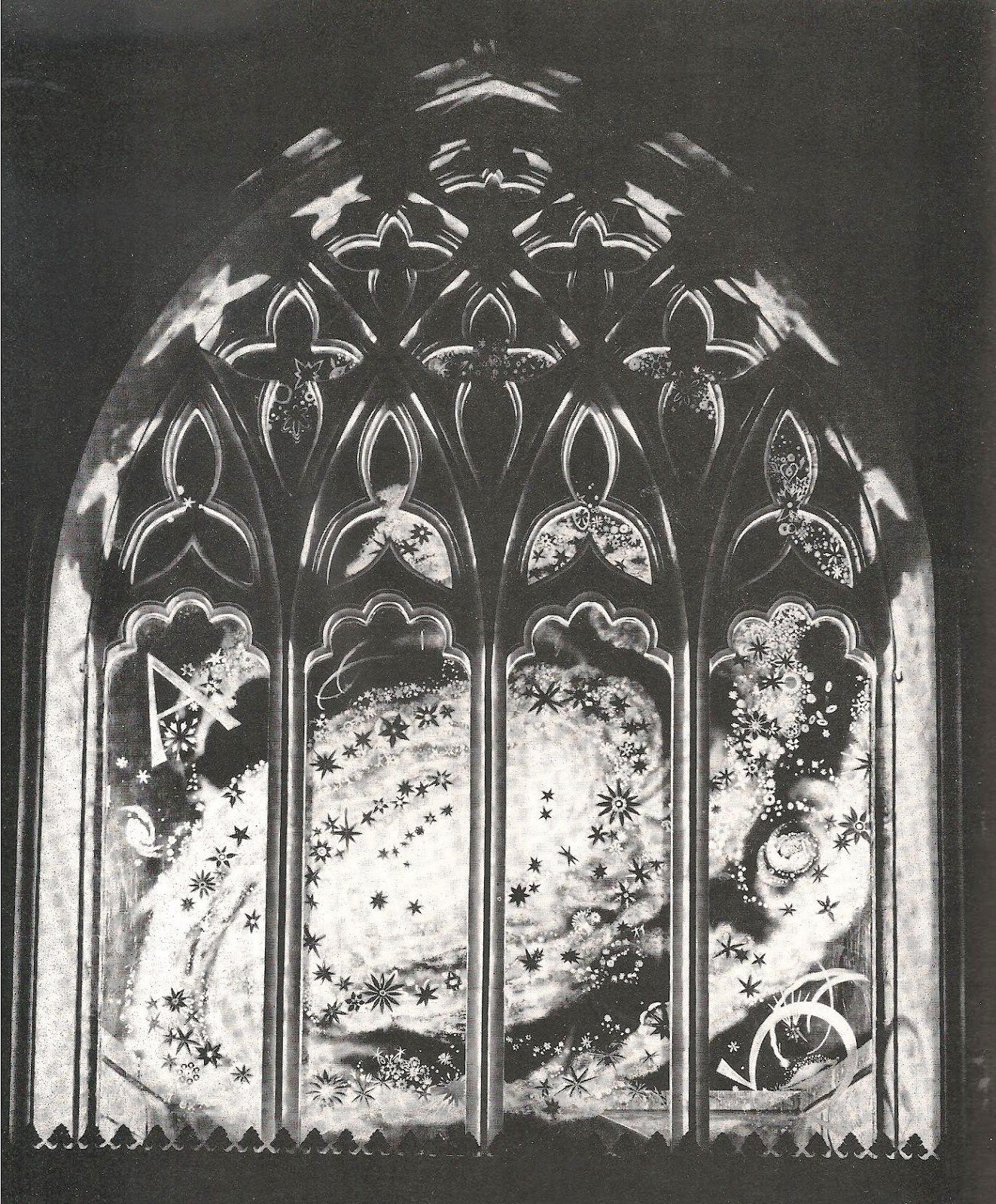 ...it can't do justice to the light.  But here, looking up from the foot of the window, you can see the shadow-patterns of the galaxy thrown on the stone. 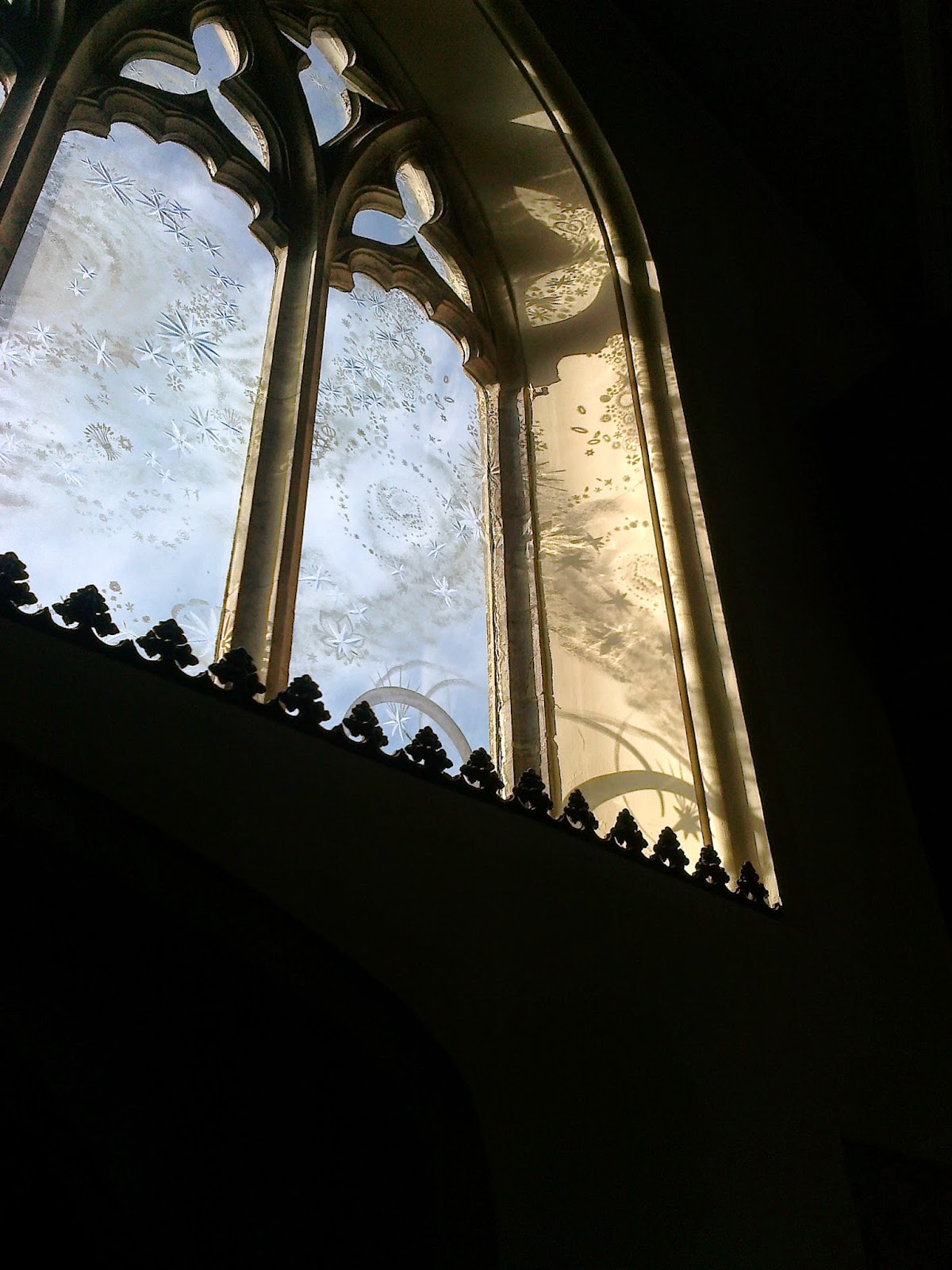 While below, first in black and white  and then in my colour photograph, is the window which references the devotional medieval poem 'The Dream of the Rood,' in which Christ's Cross weeps tears and precious jewels: 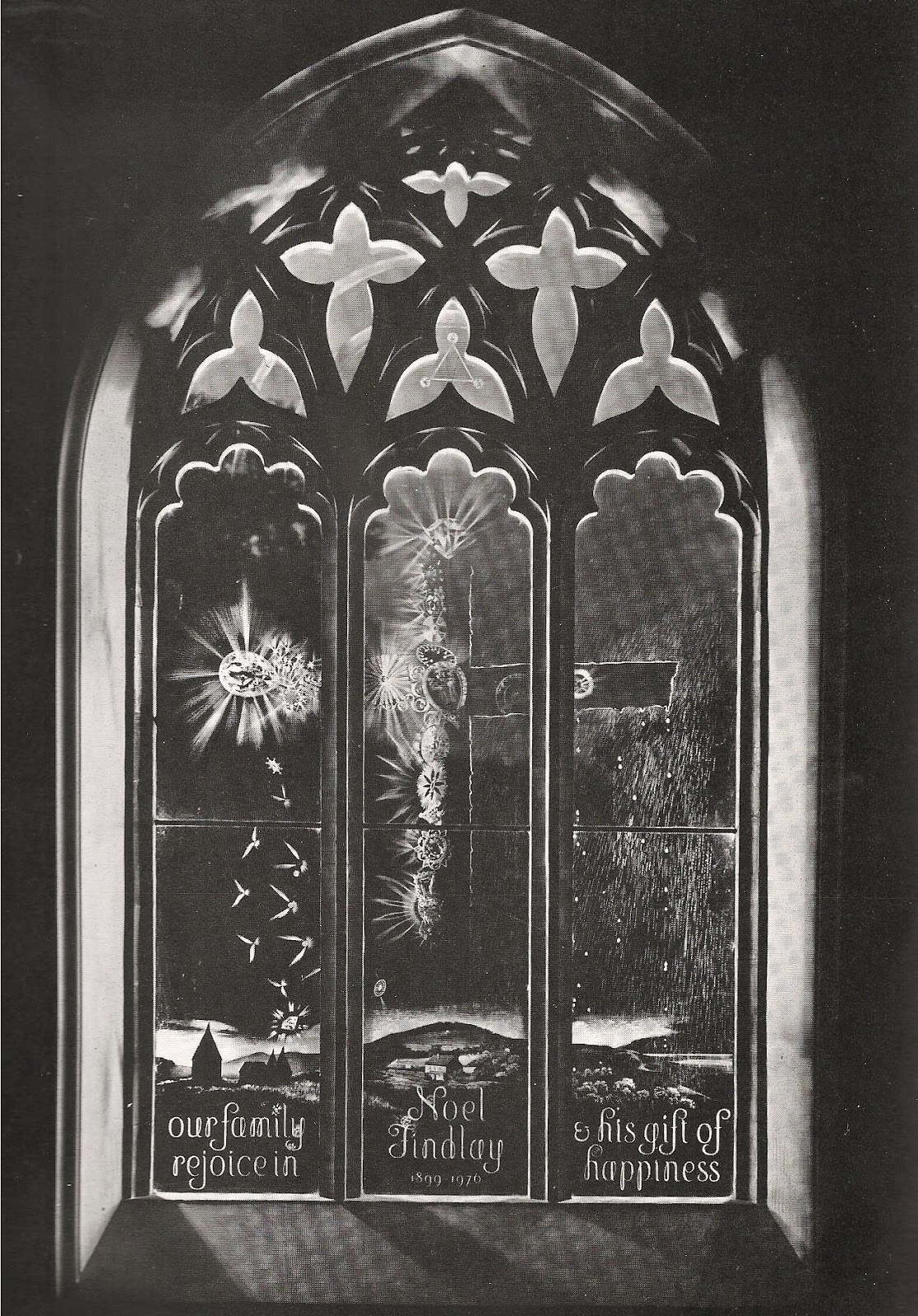 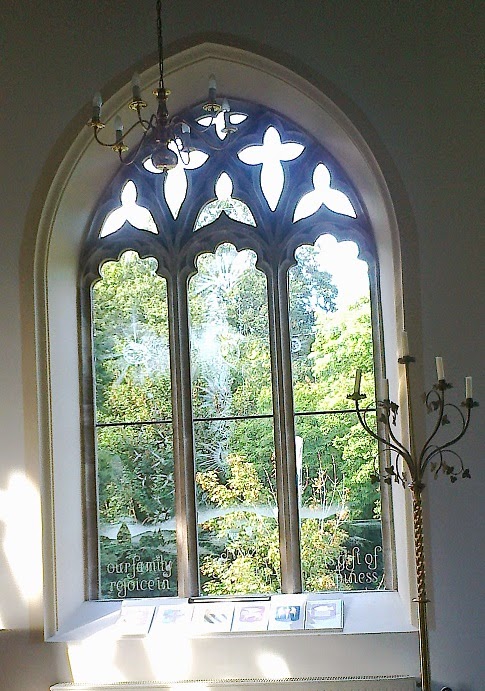 Whistler modestly wrote that engraved glass could never compete with stained glass "for the power and the glory. But it has its advantages. It does not reduce light in the kind of church where light is an asset. ... Then also it does not block a view where a view is worth keeping.  The reason for this is that the eyes, like the camera, cannot give the mind clear intelligence of near and far simultaneously. When focussed on the glass, they record a blurred background. When focussed on the background, they look straight through, hardly noticing a picture that is always composed more of nothing than of something, more of gap than scratch."


Teach me, my God and King,

In all things Thee to see,
And what I do in anything
To do it as for Thee.


A man that looks on glass,
On it may stay his eye;
Or if he pleaseth, through it pass,
And then the heav'n espy.


All may of Thee partake:
Nothing can be so mean,
Which with this tincture—"for Thy sake"—
Will not grow bright and clean.


A servant with this clause
Makes drudgery divine:
Who sweeps a room as for Thy laws,
Makes that and th' action fine.


This is the famous stone
That turneth all to gold;
For that which God doth touch and own
Cannot for less be told.


Picture credits: Colour photos copyright Katherine Langrish.  Black and white photos and all quotations from Sir Laurence Whistler are taken from his book 'Scenes and Signs on Glass', The Cupid Press, 1985
Posted by Katherine Langrish at 05:30

Wrote a long comment, but it disappeared - never mind: I loved these windows, and have very much enjoyed this post. Thank you!

Beautiful windows. I love the RAF pilot's commemoration in particular.

What beautiful windows. It reminded me of that lovely episode of the 'Vicar of Dibley' where they raise money for a new stained glass window and when it was unveiled it had plain glass in the window instead, because the vicar had given the money to famine relief project. But the sunset they saw through the clear glass was far more wonderful than any stained glass could have been. Sentimental I know, but maybe nice all the same

I have never seen anything like this before - it's wonderful! And I love George Herbert's poetry. Your post has made me go and read some of his poems again.

These windows are exquisite. I keep logging on to have another look at them. Thank you. I feel richer for discovering them.

Thanks for this, Katherine. Moreton is not far from me in Swanage aand I keep meaning to go and have a look at these windows. Your post has given me a nudge. Wonderful!

Thankyou all, I hope you'll go and look if you can. They are exquisite.

I feel exactly like Ann Turnbull! Want to get on a train tomorrow and visit this church. A really marvellous post, Kath and I too love Herbert and this amazing hymn.