Of arms and the man I sing by Mary Hoffman

This week and month, we are bound to be thinking of the onset of the Great War a hundred years ago. At a time when hideous atrocities are being committed against civilians and combatants  in many parts of the world, the old question is being asked: have we learned anything about the nature of war and what alternatives there are to it in the last century?

The answer is too bleak to give here. 1914-18 was supposed to be "The War to end all war," and we can't now put ourselves back into the frame of mind that could possibly believe that to be the case. So fast forward thirty years.

A week ago I was in Normandy, as a guest of the airline Flybe and the Normandy Tourist board. Two months ago President Obama and Queen Elizabeth also landed at the tiny airport at Caen, to join other dignitaries arriving to celebrate the 70th anniversary of D-Day, or as it is known in France, "Jour-J."

I had flown from the equally tiny airport of London Southend, hopping over the channel in less than an hour. After a five minute wait at the single luggage carousel, we went straight to the spectacular Memorial Museum, which is currently hosting an exhibition of 100 Objects from the Battle of Normandy. 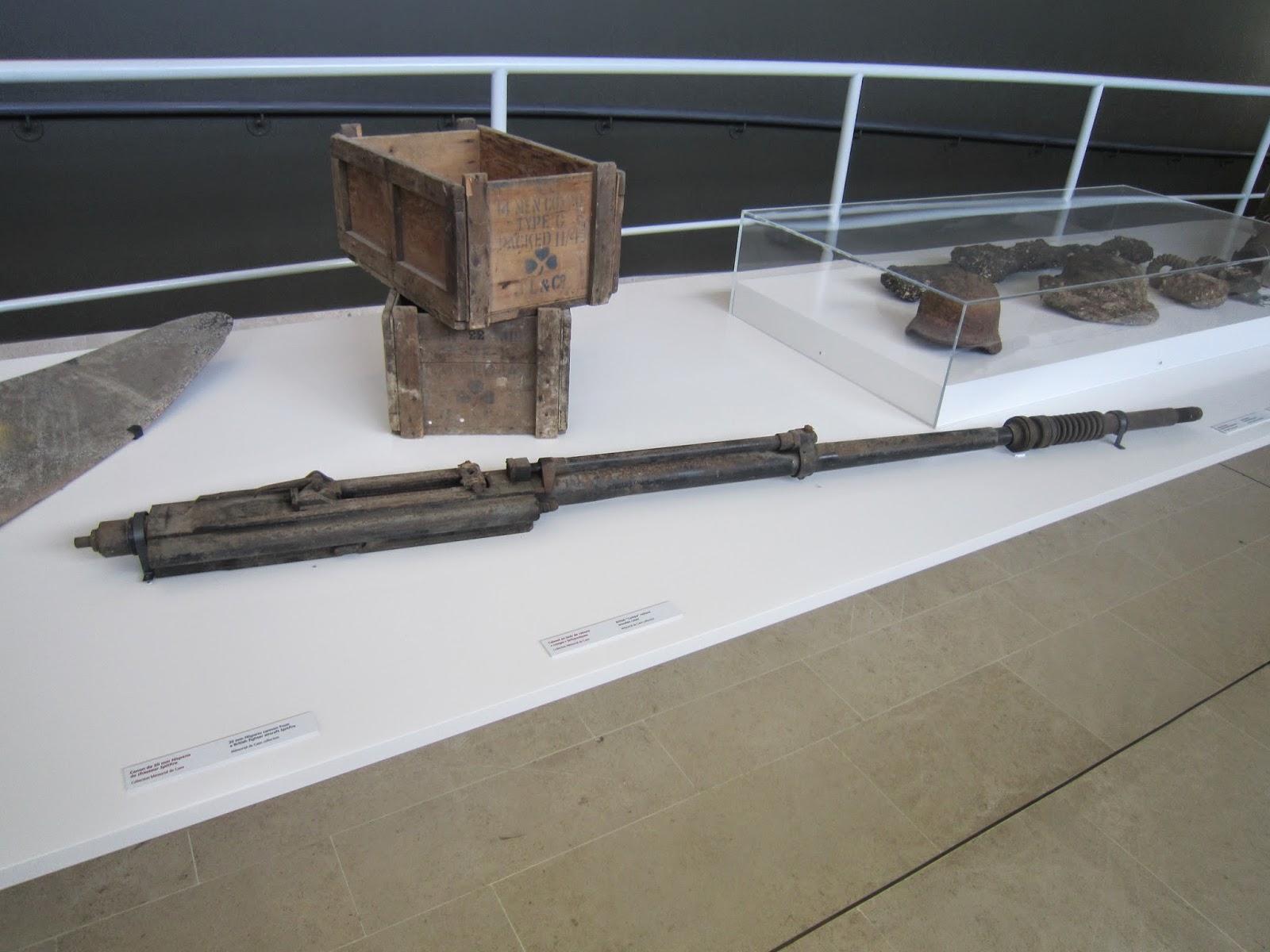 Those are "Compo boxes" in the background, which carried British soldiers' rations; in the foreground a Hispano cannon from a British Spitfire.

The museum was opened in 1988 and is built on top of the bunker where General Richter directed German operations. As you enter the permanent collection, the first thing you see is the statistic that 10 million people died in the First World War, with 21 million wounded or unaccounted for.

It takes you through the twenty-one years between one war ending and the next beginning, putting most of the blame firmly on the Treaty of Versailles.

I hadn't realised how long the "Battle of Normandy" lasted. All the books say 100 days and that takes you to almost mid-September if you reckon it from D-Day on 6th June 1944. But many commentators take it only to 25th August, when Paris was liberated by the Allies. I also hadn't realised how much destruction the bombing caused: 73% of Caen, for instance.

And the average age of the Allied combatants was only 24. Only 25% of the troops in Normandy on the German side were actually Germans by 1944, which clearly must have had some effect on morale.

The Allies pressed forward to take Caen as soon as they had landed on the Normandy beaches but were not completely successful until 19th July.

The first death in Operation Overlord was of Lieutenant Den Brotheridge, whose glider landed near the bridge over the Caen Canal at 6 minutes after midnight on 6th June. He led his Platoon over the bridge straight into German machine-gun fire and never recovered from his wounds. 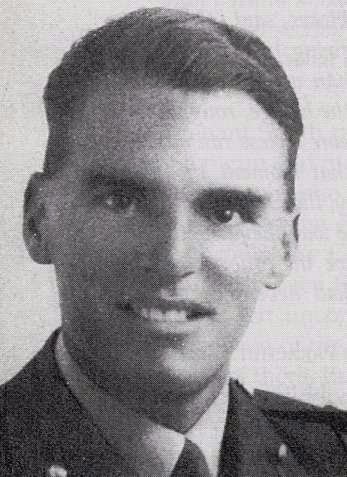 He was twenty-eight years old and two weeks later, his wife gave birth to a daughter, Margaret. I'm recalling him here because I am lucky enough not to have lost any family member that I am aware of in either of the last century's World Wars.

But each death carried a story like Lieutenant Brotheridge's; each person had a family, a past and a future that was snatched away. Just as each person in Gaza, Israel, Syria, Libya, Nigeria, Sudan and every other country at war has a history without a future, unless we remember them. 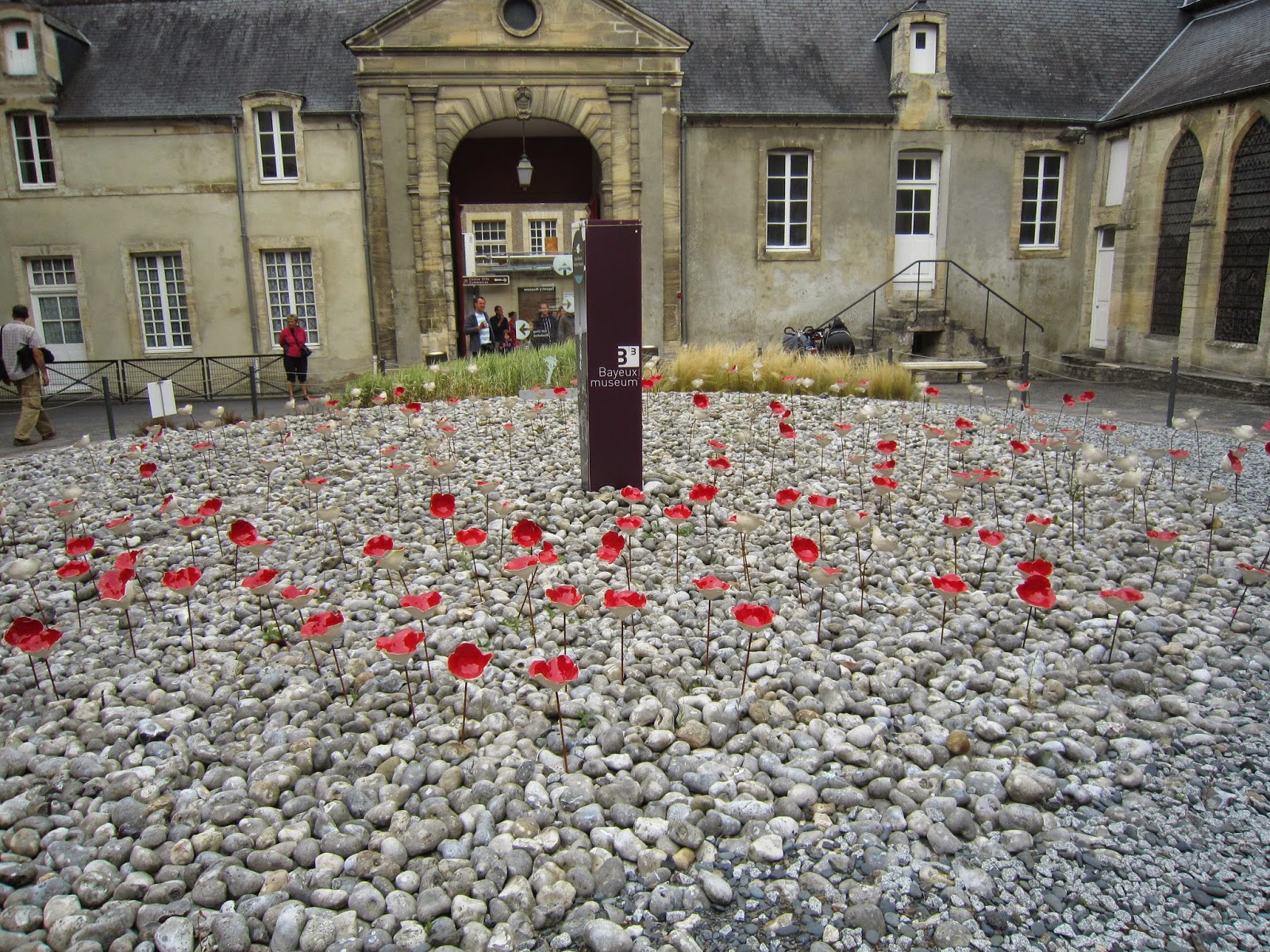 These ceramic poppies are planted outside the Museum in Bayeux that houses a "tapestry" portraying a war even further off than the one we commemorate this year - nearly ten times further in the past (You can read about it in Adèle Geras' post on 7th August). They mirror the ones flooding the moat of the Tower of London at the moment.

Each tiny act of Remembrance, whether it is lighting a candle, wearing a poppy (white as well as red), looking at an old photograph or reading a diary or memoir is a small step away from war and towards peace. It is not enough - but it is a start.

(Mary Hoffman was the guest of Flybe and the Normandy Tourist Board).

Such a moving post, Mary. Thank you. Because I feel so impotent, I have made a small pact with myself, which is that when I come across a gesture of healing or peace, I am reposting it. An Israeli hugging an Arab, A group of journalists from Tel Aviv taking a busload of flowers and medicines to the Gaza gate…. whatever it may be. Only arms dealers and politicians want wars, it is rarely if ever the regular soldier. In 1914, there was no real way for the ordinary man and woman to express their desire not to go to war, to fully comprehend what was at stake, what games were being played out… We have the media to report 7/7 and we have social media. These offer us far more opportunities to voice our concerns, to speak out for peace, to cast our vote. To support small gestures of peace and moves towards dialogue might be ways to show that we have learnt something.

Very good post, Mary. And lovely to see those Bayeux poppies. The London moat poppies are beautiful too.

Thank you for this, Mary - a really moving and thought-provoking post. Last night, like many thousands of others, I lit a candle in memory of those who died in the 1914-18 war, and in wars since. A good time to reflect on why, in 100 years, we seemed to have learned so little.

A very timely and moving post, Mary. Alas, David Cameron's remarks did give a depressing indication of how little we have learned...if only a tenth of the money spent on military R &D was spent on research into conflict resolution and building peace, young men might not have to kill and be killed in future wars. Perhaps, as well as remembering the dead, I should write to my MP and suggest that. Would anyone like to join me?

A lovely post, Mary. I am pleased to see that there ceramic poppies for the victims of Bayeux, too. It's easy to think differently of wars that are long ago, but not reasonable to do so.