We're going to need a bigger cabinet by Mary Hoffman

On the 30th of each month, when it's not the last day (i.e. in January, March, May, July, August, October and December) a History Girl puts up an extra post about something she would like to put in our virtual Cabinet of Curiosities. This month it's my turn and I'm afraid I'm going to be greedy.

You see, I want the Bayeux Tapestry.

I have already written about it on my Book Maven blog. And Adèle Geras has written her own post here on the History Girls.

You will have to bear with us. We both saw it this summer and it makes a huge impact. But because it is 70 metres long and difficult to stuff into our cabinet, I'm going to concentrate on the Alderney Finale, a brilliant initiative carried out on the Channel Island to complete the Tapestry, which is missing its final panels.

It was the brainchild of Librarian Kate Russell and artist Pauline Black and was unveiled in April of last year. This summer it has been on display in the Bayeux Tapestry Museum and in fact tomorrow is the last chance to see it there. Then it will return to Alderney.

From the 1st February 2012 when Kate and Pauline applied the first stitches 400 people have had a hand in working on the Finale, including Prince Charles and and Duchess of Cornwall. 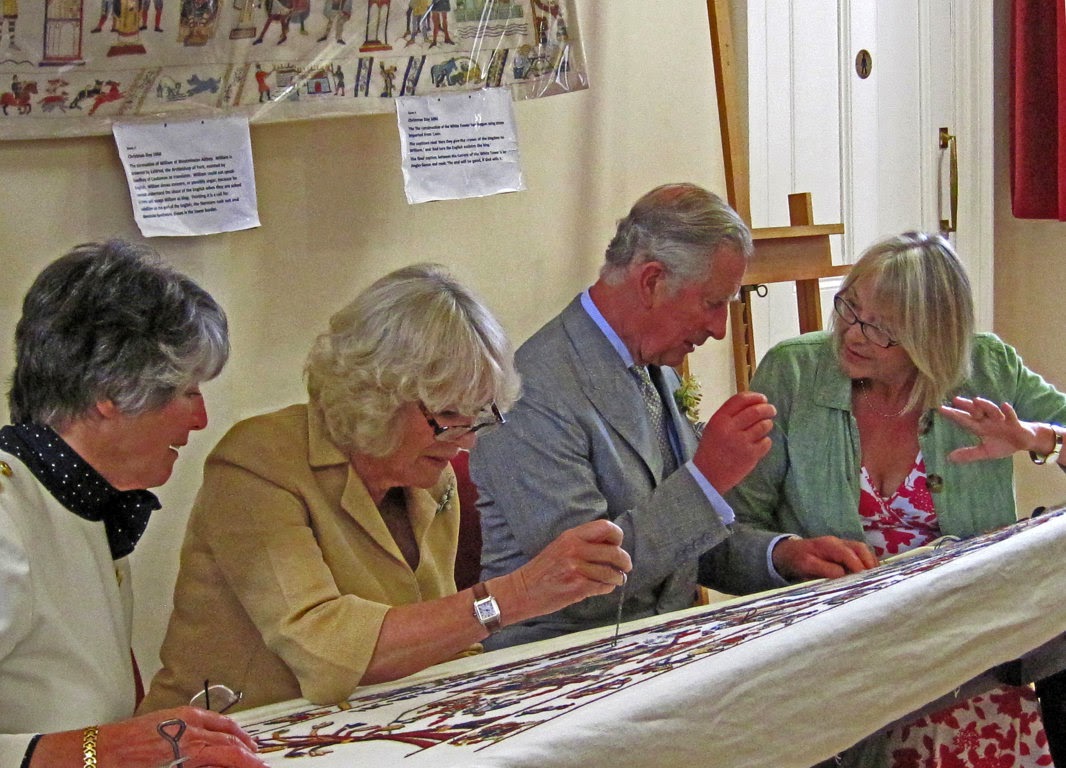 There are Four scenes. In Scene one, the victorious William of Normandy has a celebration dinner with his half brothers Odo, who is thought to have commissioned the Tapestry, and Robert. The remnants of the Battle of Hastings are shown: corpses, severed limbs, grieving widows. After the battle is when William gets his nickname of "the Conqueror" though this is not shown here. (Formerly he was known as William the Bastard - no comment on his nature, just that his parents were not married). 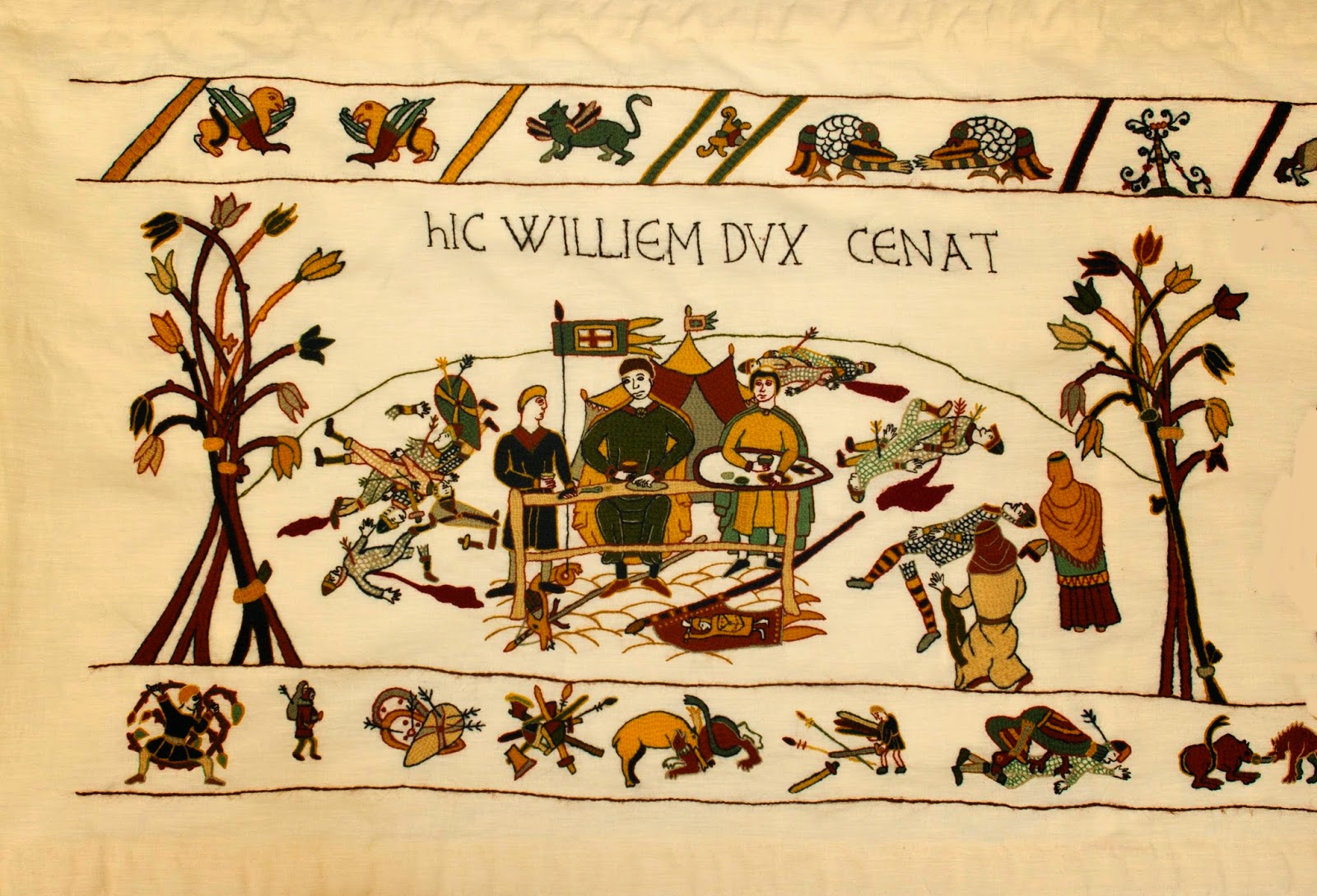 Scene two shows William at Berkhampstead, charmingly rendered in Latin as "Bercheha(m)steda," accepting the surrender of English nobles, including the Archbishop of York. 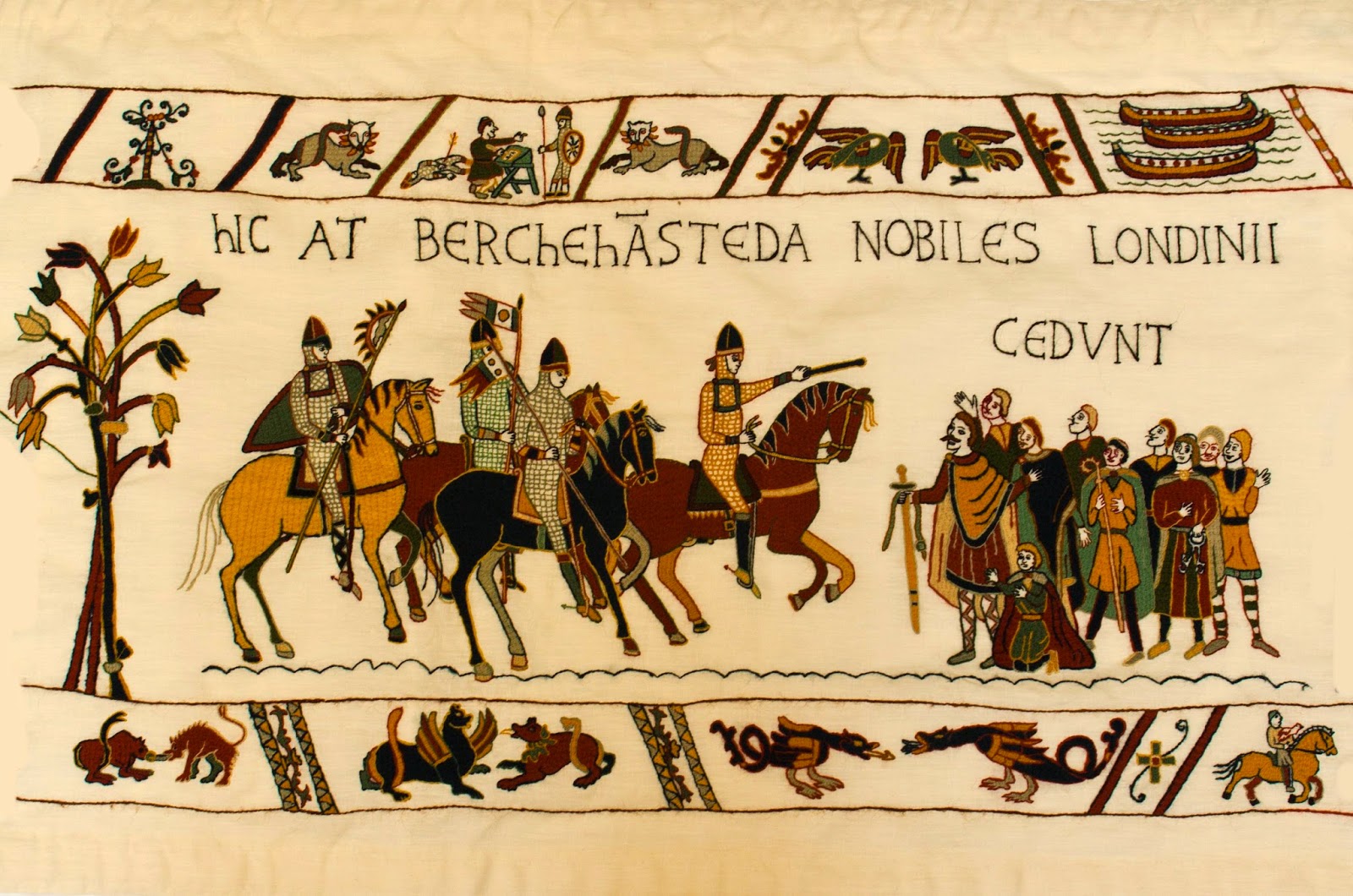 Scene three is the climax of the piece and surely a subject very likely to have been in one of the lost panels: the Coronation of William at Westminster. It is Christmas Day 1066. 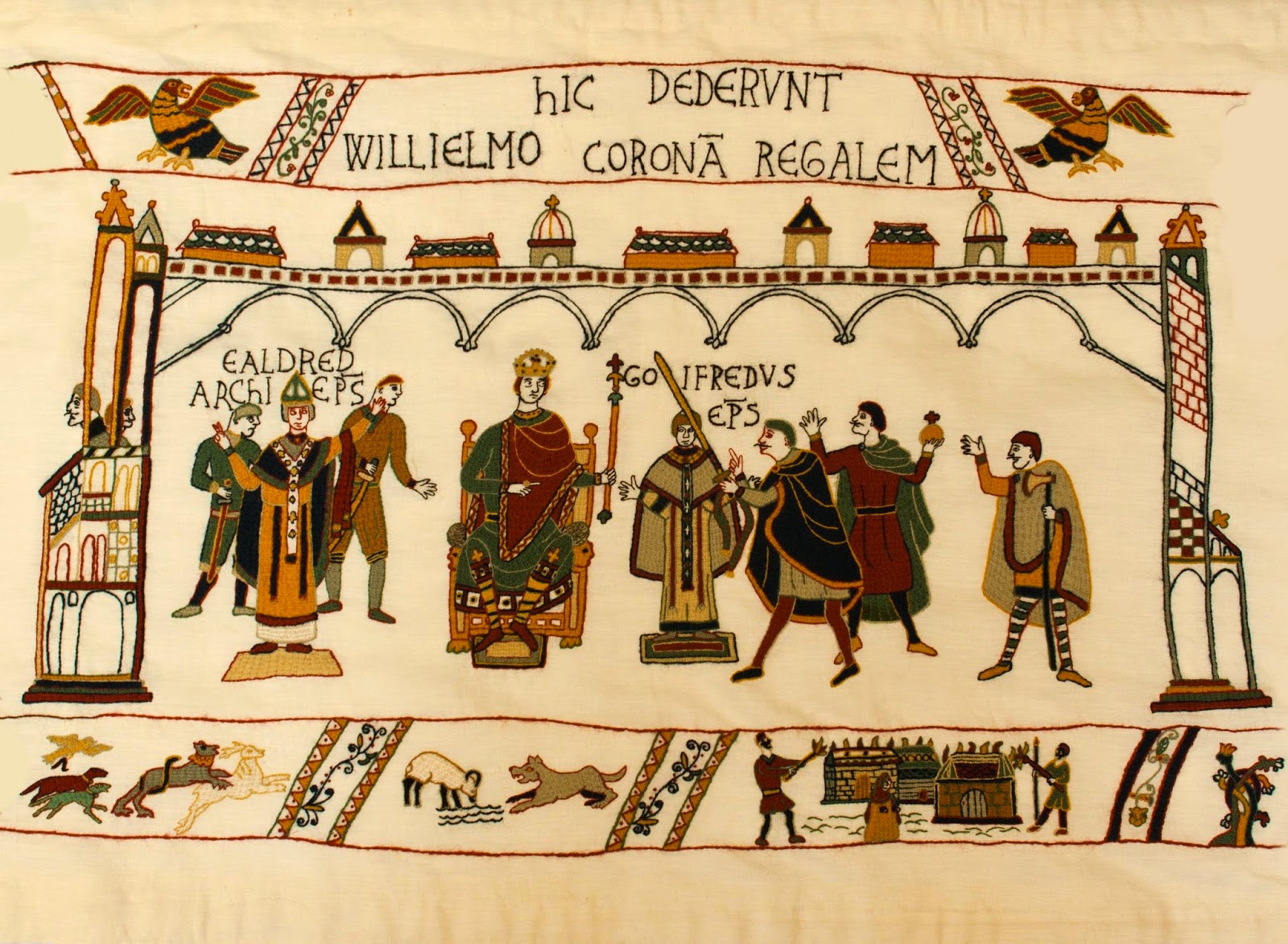 Scene four is a little tailpiece showing the beginnings of the White Tower at the Tower of London, built with Caen stone, from Normandy, that shines out to this day. 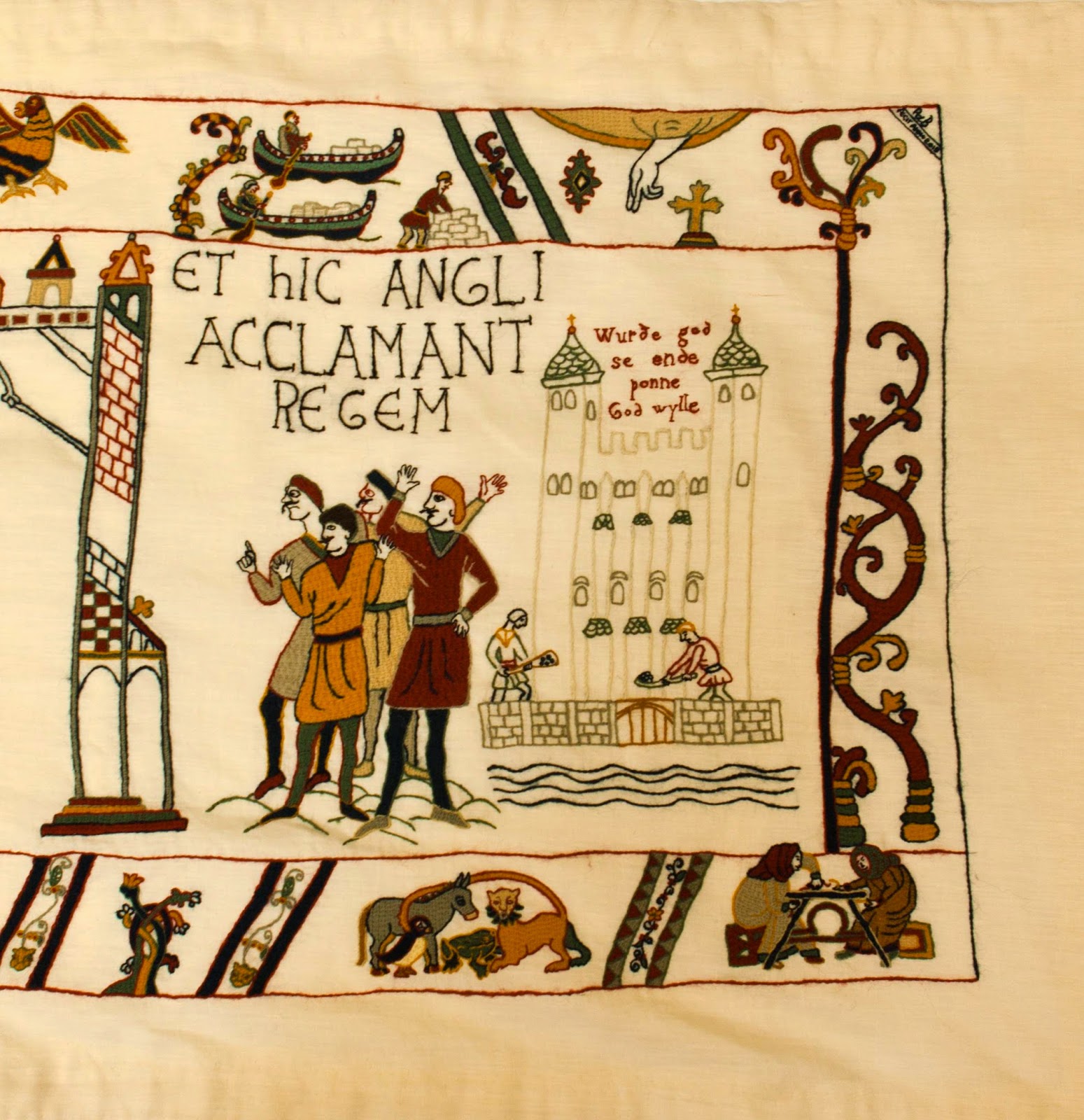 The Latin inscriptions are by Robin Whicker in forms appropriate to the 1070s. And the style and design is satisfyingly close to the original Altogether an inspired piece of work. You can see lots more pictures on Flickr.

Just as in the 11th century work, there are other scenes enacted and symbols added in the strip that goes along the bottom. A big favourite is the one showing the donkey, toad and puffin, representing Guernsey, Jersey and Alderney itself, all encircled by the tail of the lion of England. 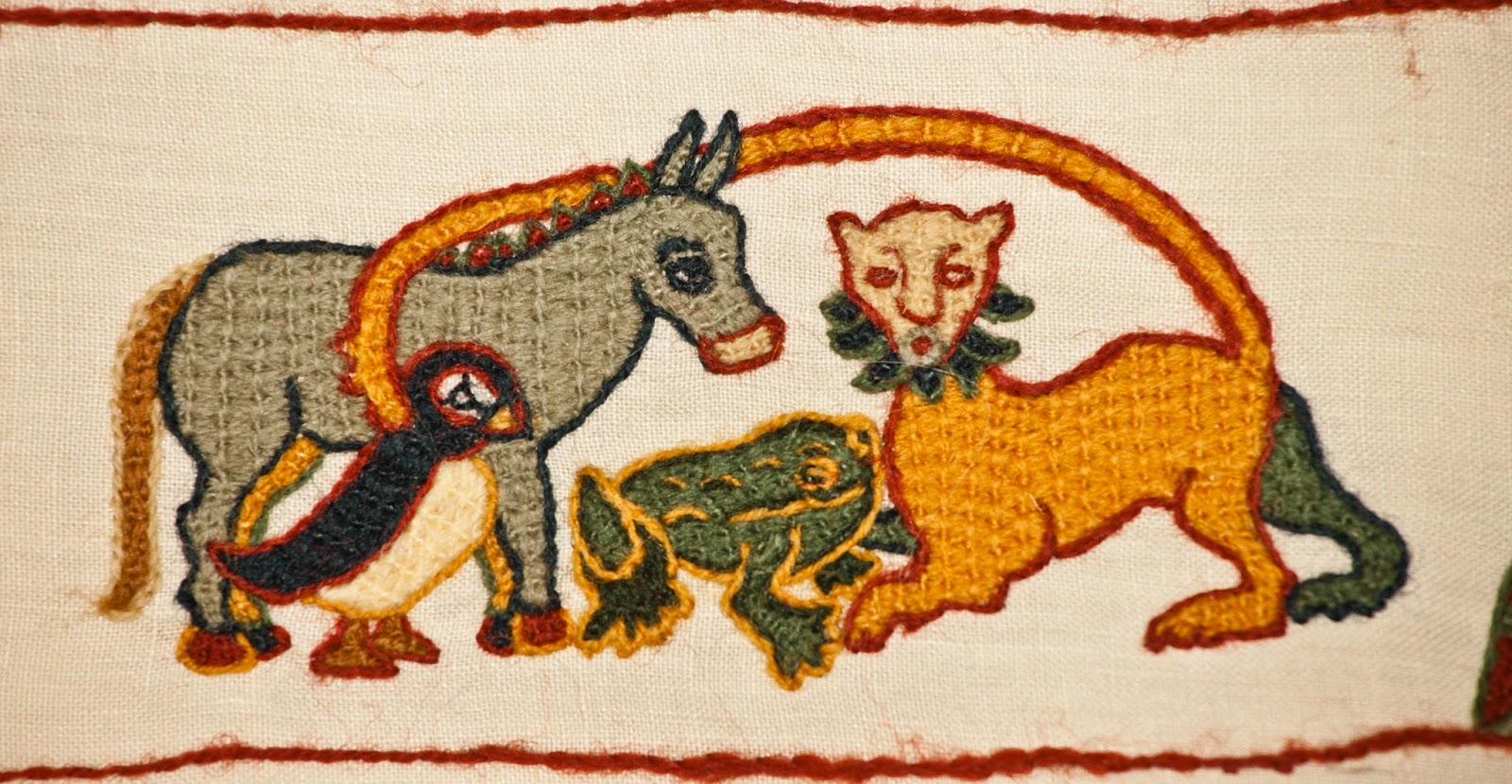 Well worth constructing a bigger cabinet, especially since anything is possible in cyberspace.

I remember seeing something about this on television, Mary.
What a lovely idea for a project it was! So nicely "drawn" with stitches, especially now I can see the sections are a standalone finale to the main tapestry, which the programme/news didn't show.
Thanks.

I didn't know anything about this modern section - it's lovely! In fact I'm ashamed to say I didn't realise the Bayeux Tapestry was incomplete.

What a fabulous idea - thanks for posting about it!

Can I also recommend the Great Scottish Tapestry http://www.scotlandstapestry.com/ which friends had a hand in making! :-) and looks fabulous!