The day I went to Buckingham Palace... by Sue Purkiss

Well, I don't know about you, but I find it's not all that often that I get an invitation to Buckingham Palace. So when, a few months ago, I was invited to a preview of a new exhibition called 'Royal Childhood' at the Queen's Gallery, I didn't have to think very carefully before accepting.

What I didn't realise was that it wasn't just an invitation to the exhibition; our group of bloggers was also given free run (well. more-or-less) of the state rooms, the day before the palace was due to open to the public for the summer. So there we were - just us, and what seemed like hundreds of young, enthusiastic, very helpful stewards - wandering through the rooms we've so often caught a glimpse of on television; among acres of red carpet and gold leaf, peering up at quantities of portraits and glittering chandeliers, imagining ourselves sitting down at that state banqueting table. It's all very imposing, so the children's toys and clothes which were the subject of the exhibition introduced a nice counterpoint - a reminder that the Royal Family, as well as being a symbol of state, has always been, at the same time, just that: a family.

One of the first rooms we went through was a drawing room - a formal one, where state guests are received. But in the centre (I think for the exhibition only) was a late 18th century dolls' house, made for the children of George III by a carpenter from the Royal Yacht. I longed for a dolls' house as a child, and it was one of my most anticipated Christmas presents ever; but when I'd got it, I wasn't quite sure what to do with it. You couldn't actually play with the dolls very well because the rooms were too small, and you certainly couldn't play with it alongside a friend. But you wouldn't have that problem with this house; it was generously sized and roomy, with lots of gorgeous pieces of miniature furniture, and dolls that were the right size to fit - and it looked as if it had been well-used. (We probably tend to think of George III in terms of his madness - but before he was afflicted with that, he was by all accounts an enthusiastic and very hands-on father, among other things.) 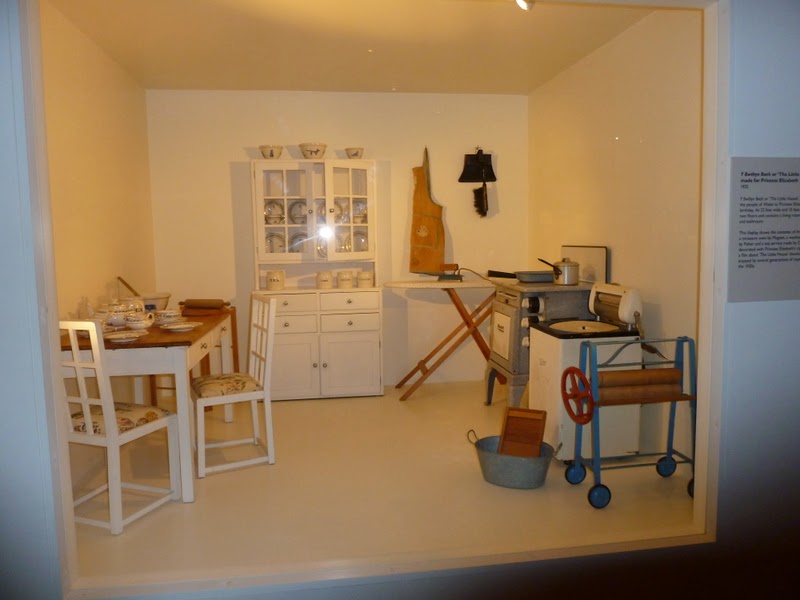 But even better, further on, was a miniature house which was presented to Princess Elizabeth on her sixth birthday by the people of Wales. It is in the grounds of the Royal Lodge at Windsor, but the kitchen (above) has been recreated for the exhibition, and a film gives you a virtual tour. It's perfect: just the right size for children, but too little for adults, and everything works - it has electric lighting and running water. Not surprisingly, it's still used today.

The main part of the exhibition is at the end of the Queen's Gallery. This gallery, for me, was an unexpected and tremendous treat, because there were paintings there by Rembrandt, Vermeer, and others of the Dutch school. This painting by Vermeer, A Lady at the Virginals with a Gentleman - has so much going on. In the foreground is a chequered floor, which demonstrates the mastery of perspective of the Dutch painters of interiors: it leads the eye to the girl, who sits with her back to us while the gentleman watches her. We're instantly in the middle of a drama: what is she thinking? Is she interested in the man? Is he more interested in her? If only she could turn round and wink at us, let us in on her secrets! And there's a portrait by Rembrandt of one Agatha Bas. She isn't made to look pretty: she has thin, straggly hair, a big nose and a slightly wary, resigned expression, almost as if she's a prisoner of her sober, exquisitely painted clothes - black velvet, snowy lace, and a little subtle gold embroidery. But she's so real: there she is, surely just as she was in life. 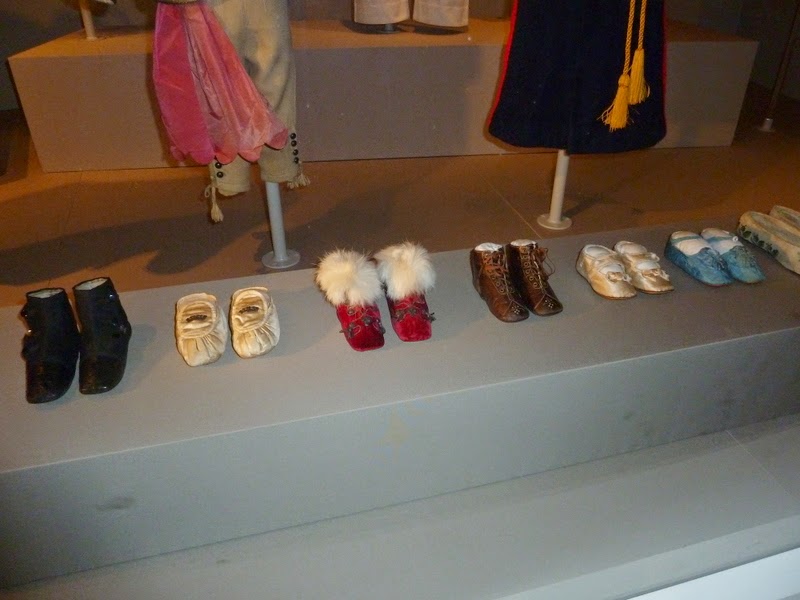 The exhibition itself has clothes worn by royal children over the last 250 years: tiny shoes, which another blogger, historical fiction writer Elizabeth Hawksley, pointed out to me were made the same for both feet -
apparently shoes made specifically for the right and left foot are quite a recent invention; little tailored coats and suits; a gorgeous fairy dress with wings. But the dress which really struck me was this one, which was Princess Victoria's first evening dress - it's so tiny! 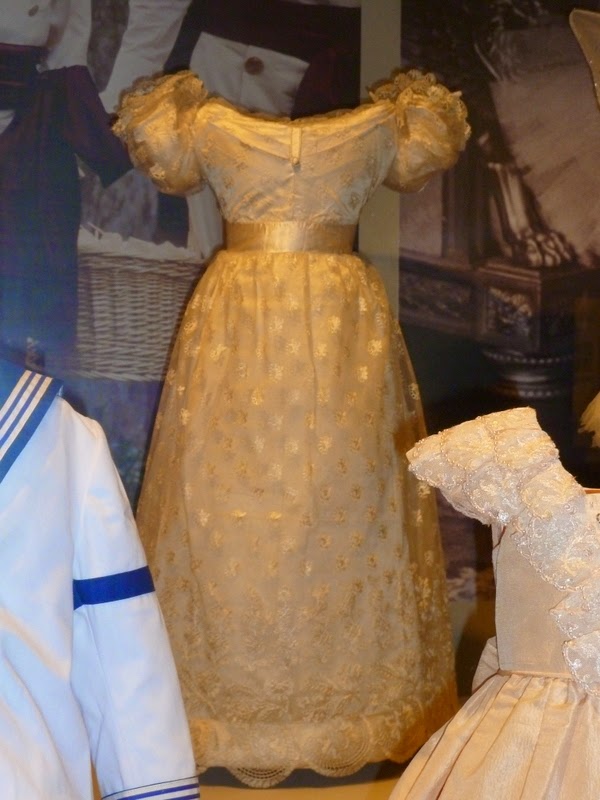 There are also games, paintings and toys - I thought the use of colour in these paintings by Prince Charles at the age of 8-9 was really pretty impressive - though the sketches further on done by Queen Victoria's daughter, Princess Vicky, look positively professional. And any child would envy the 'toy' cars which have been presented over the years. There's just something about child-sized versions of grown-up things that appeals, isn't there? Lucky royals, to have access to such perfect replicas. 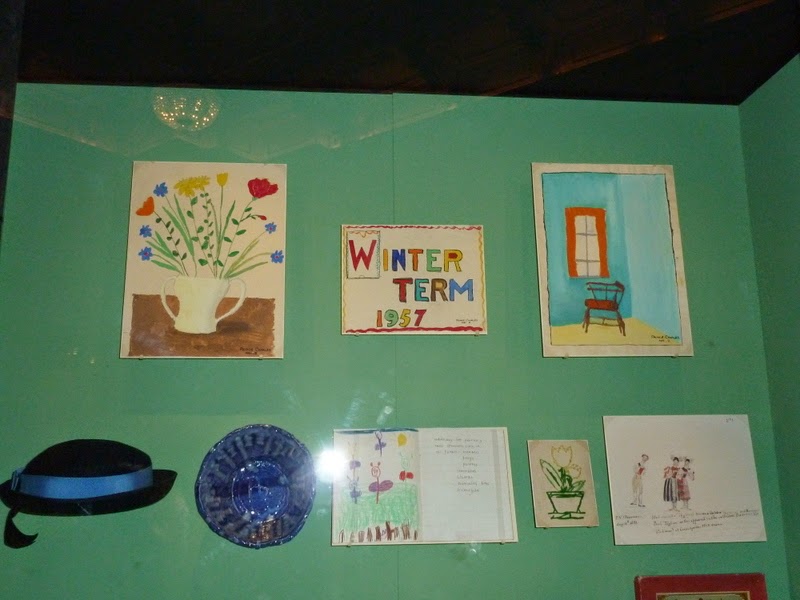 There are details of the exhibition here. It's not cheap, but it's a fascinating exhibition in a unique setting, and with so much extra to see as well - especially those wonderful Dutch paintings. There's a special family pavilion with activities for children, a cafe with very splendid cakes etc, and on the way out you walk through the grounds, with a view of the palace; it's quite difficult to believe that you're right in the middle of London. I had a lovely time. My only regret is that I was in a bit of a hurry when I left, and didn't stop to replace my scruffy umbrella with a bright and shiny Buckingham Palace one. (But I did buy a toy corgi. It's for a future grandchild. No really, it is.)

My thanks to the Royal Collection Trust for inviting me!

Electricity and running water in a doll's house! An interesting mix. Health and safety in the life of the little Princess.
I too loved doll's houses, but the size is so important for proper playing with friends.

Besides, doll's houses always had a touch of one-upmanship (one- upgirlship?)about them, combined with the expectation of playing quietly and nicely. The Georgian one sounds lots of fun for the group of children.

Thanks for this insight. It does sound like a delightful exhibition, and it's always - to my mind - encouraging to hear about an exhibition from someone who has actually visited. It may make a nice outing as part of a London trip once September starts.

Sue - the photograph above actually shows one of the rooms inside Queen Mary's Dolls House (Edwardian) - more about it here...
http://46.236.36.161/queenmarysdollshouse/home.html

Lucky you for getting to look around this exhibition - so fascinating!

Sorry - jumping the gun - I did not read carefully enough! Blame it on this head cold of mine! Please delete my faux pas!

Where is the pic of the corgi? I have never been to Buckingham Palace. How very splendid. A fun post, thank you.