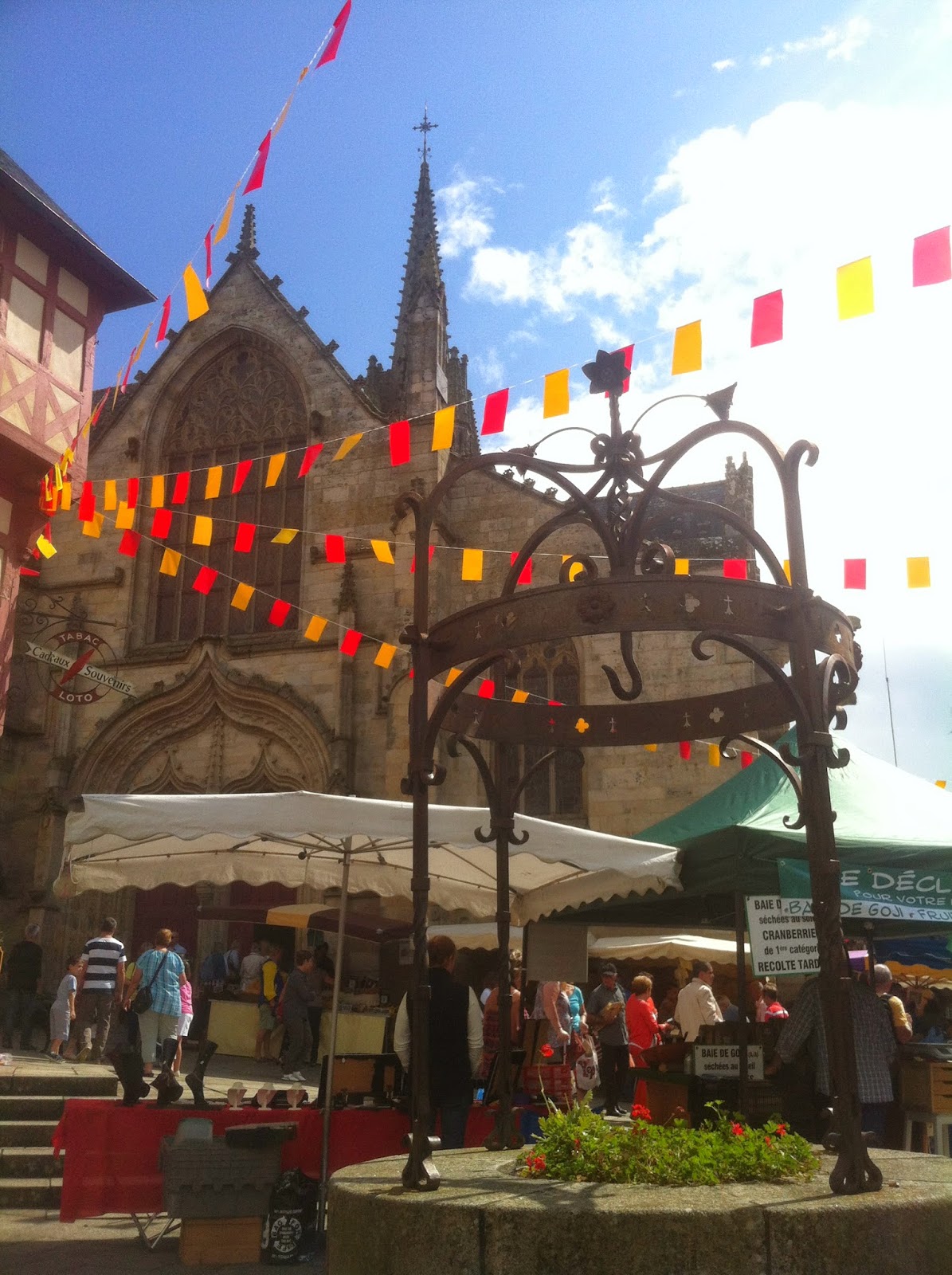 I’ve been away on my holidays. This gives me the chance to put up a picture of the town I went to, Josselin in Brittany. Among other things, it has this magnificent castle. 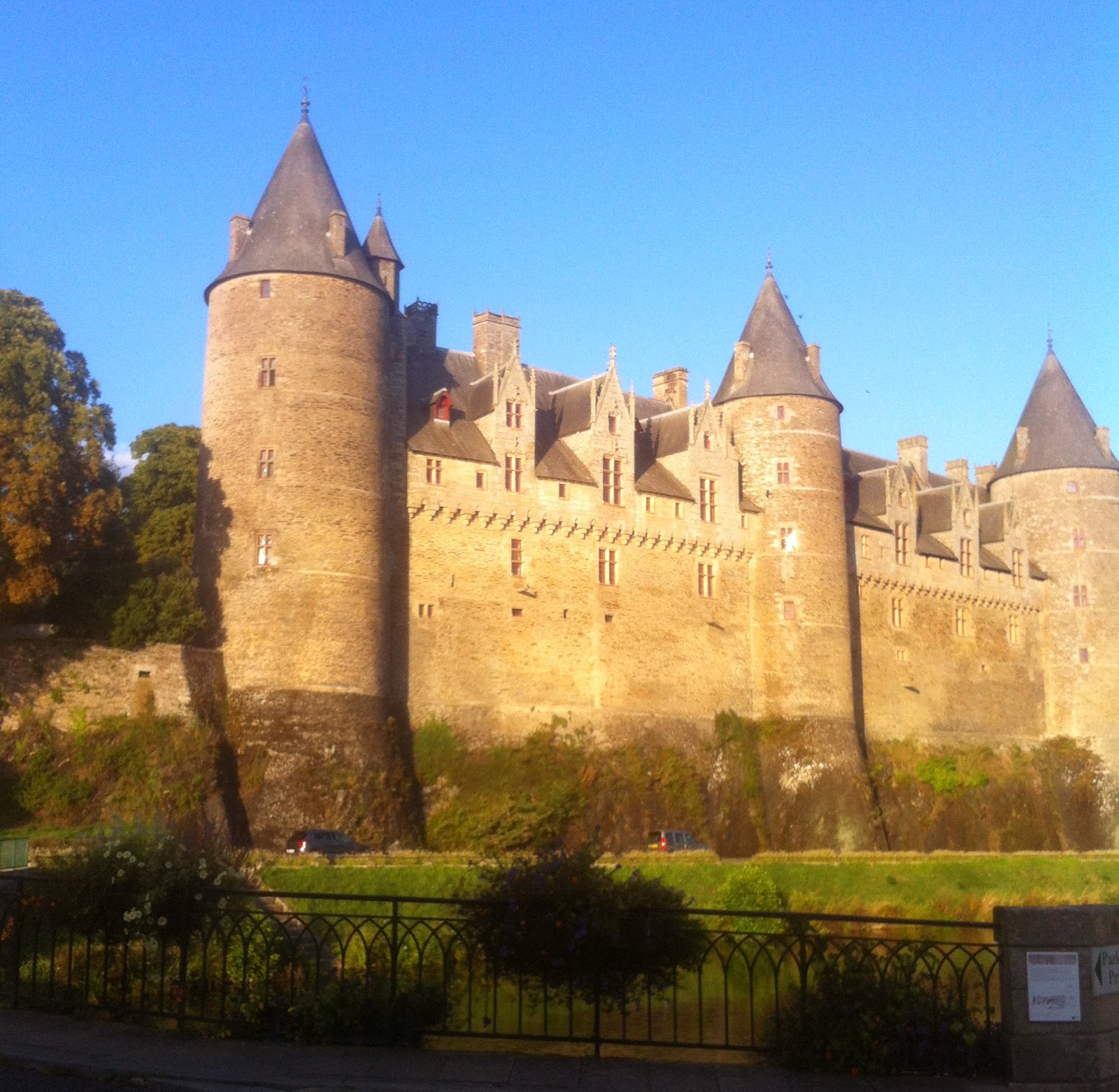 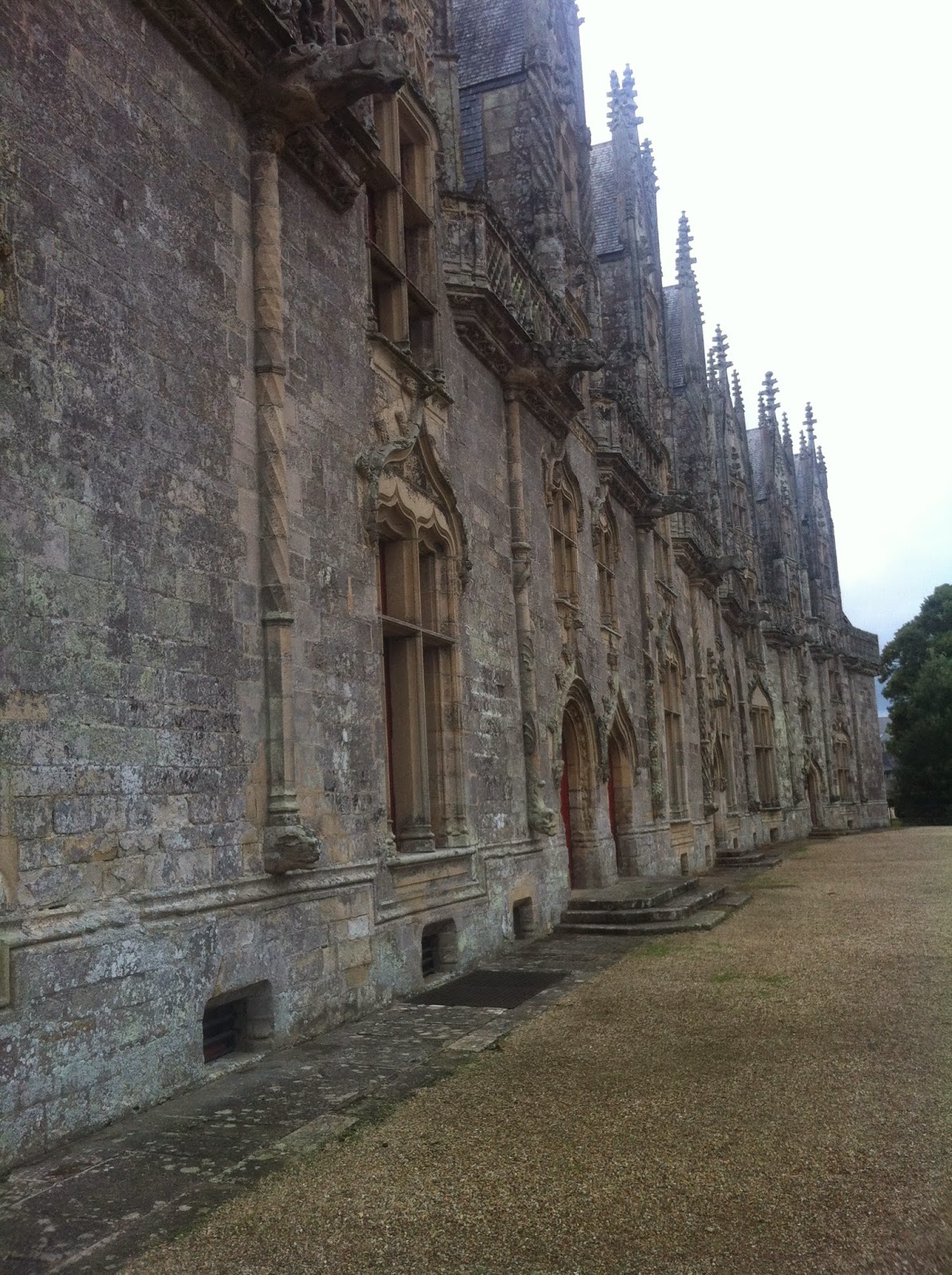 You can read about it in detail here. The castle is still a private home - that of the Duke of Rohan - but during the summer months tourists are allowed in to the grounds and some of the main rooms on the ground floor. It is a rather wonderful place - that fantastic war-ready frontage looking out over the Oust - the river used to flow right along the castle walls until the Nantes-Brest canal was built - and on the inside a riot of renaissance stone work.

There is also a lovely market every Saturday morning, an interesting and ancient church and a profusion of half-timbered buildings.

So of course we had a wonderful time and I learned just enough about the history of Brittany to realise I really need to read The Discovery of France by Graham Robb again. 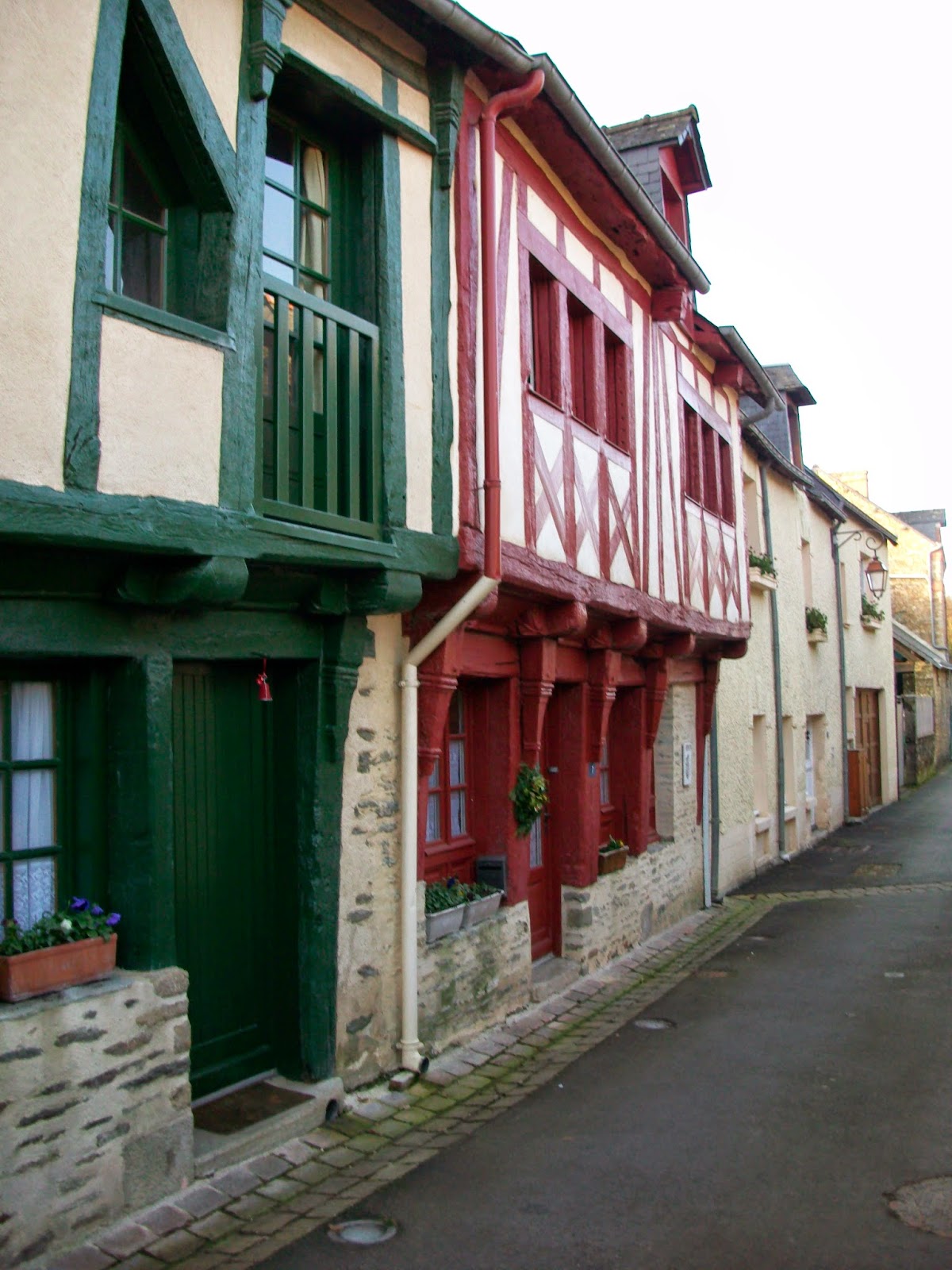 Then there’s a second, personal layer of history overlaying our time there. My parents first bought a house in Josselin in 1989. It was a complete wreck - ‘épouvantable’ the estate agent whispered ominously, and I remember my Dad peering about the place on the day they signed the contracts saying ‘Oh Celia, what have we done?’

My brother, a student at the time, and I, celebrating my 16th birthday, thought it was marvellous. There were trunks in the attic with address labels still glued to them and shreds of purple wallpaper hanging off the walls. There were pans with some strange pottage preserved in the kitchen and plastic cladding hiding the 17th century beams in the living room. My Dad discovered while taking measurements for his plans that there wasn’t a single straight wall or right angle in the place.

Mum and Dad threw themselves into the reconstruction and rebuilding, taking off the modern facade to expose the half-timbering, taking down the barn in the back yard and getting rid of the wall paper (despite my protestations). I spent the following summer with my best friend, Emma, scrubbing the beams in the sitting room, and my 17th birthday polishing the floor in the same room. Mum and Dad found that the house opposite was going for a song and bought that too. I think they’d just run out of things for me to scrub. 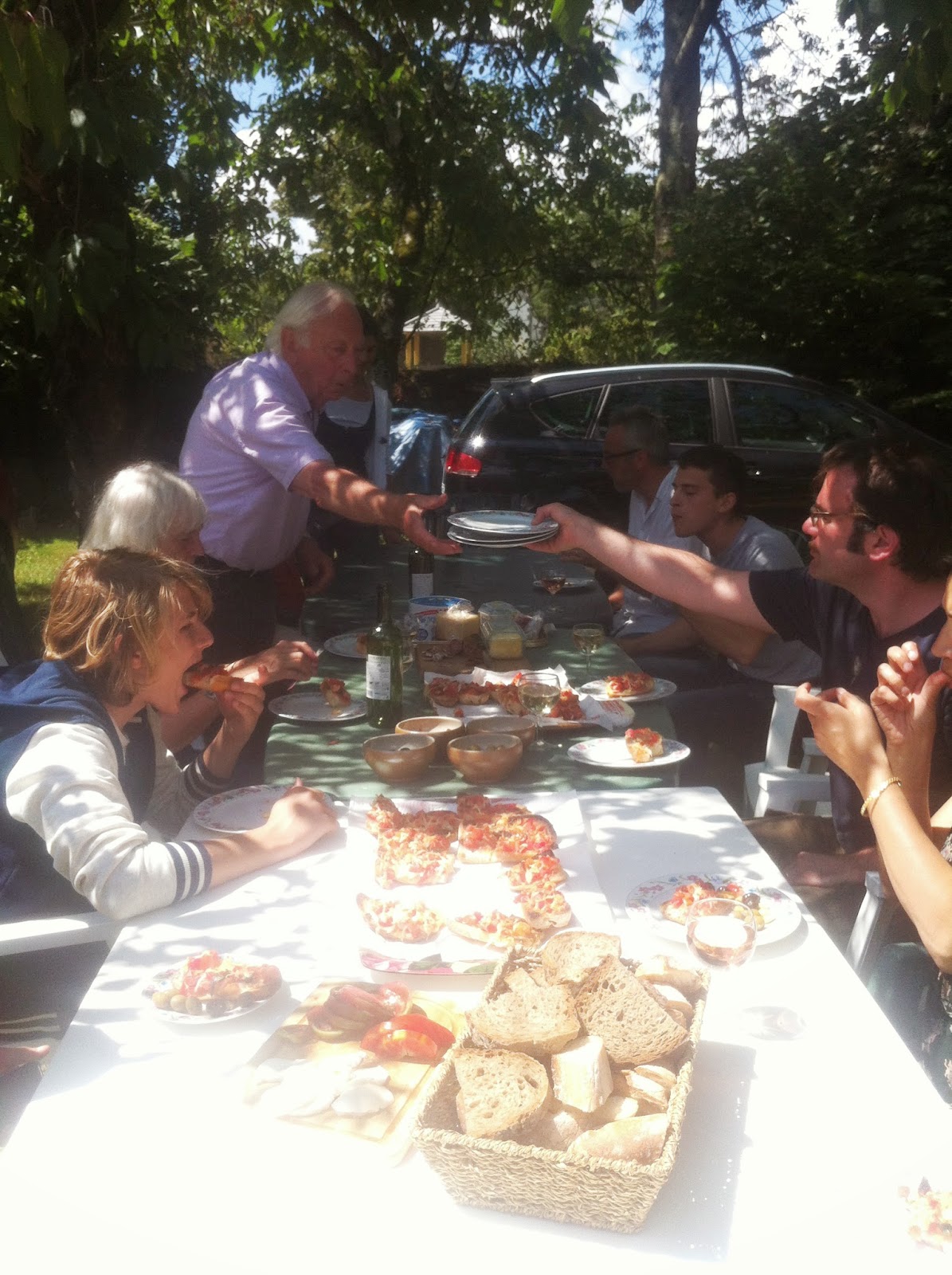 This summer was a bit special then - it marked 25 years since Mum and Dad bought the first house we had a big party to celebrate. Afterwards Mum said all their friends had been talking about what good French my brothers and I speak, but she said it with a certain air of suspicion, as if we’d been keeping it a secret. Mostly though the specialness came from having so much of the family there, we missed one of my nephews, Gregory who was working away in Belgrade, but the rest were all with us  - from Philip who is twenty-three and rather brilliant, to Tessa who is one and the only girl. She seems like a tough cookie though.  Darko looks like an elf and Ranko is very handsome and obsessed with his tan. Adam’s two sons, Dylan and Theo, made sure we played proper games every night - especially the werewolf one - and after a string of friends and boyfriends over the years, I distinguished myself by bringing a husband who sees cooking for 14 people as a really good time.

Places with which we have a long association hold a history that is both personal and universal. There is nothing, for instance, like walking by the Hotel du Chateau where Emma and I celebrated getting our GCSE results to trigger the sort of Proustian reactions so useful to any writer. There is nothing like then walking through the thickness of the castle walls to make you think of the teenagers celebrating their own small victories a hundred or five hundred years ago.

Oh pretty! I was in Brittany this summer and went to Tonguedoc castle. It was my favorite castle we visited in France. My boyfriend is a dual US and French citizen so I hope to go back often!

The area's packed with brilliant castles, isn't it? Love it there.

What a wonderful post. Brings back memories of French exchanges in Brittany, and castles, and riding a velomoteur with the family's collie balanced on the crossbar! Lovely to have family history of your own in such a historic place.

I'm in France too, in the beautiful Tarn & Garonne... where I have been very happily reading Theft of Life, thank you!

Thee's a certain MichelAngelesc feeling about the scene of the meal in the garden where God, as it were, connects through a pile of plates with the outstretched fingers of Man, as it were.