Cabinet of Curiosities: Are you Sitting Comfortably? By Elizabeth Chadwick 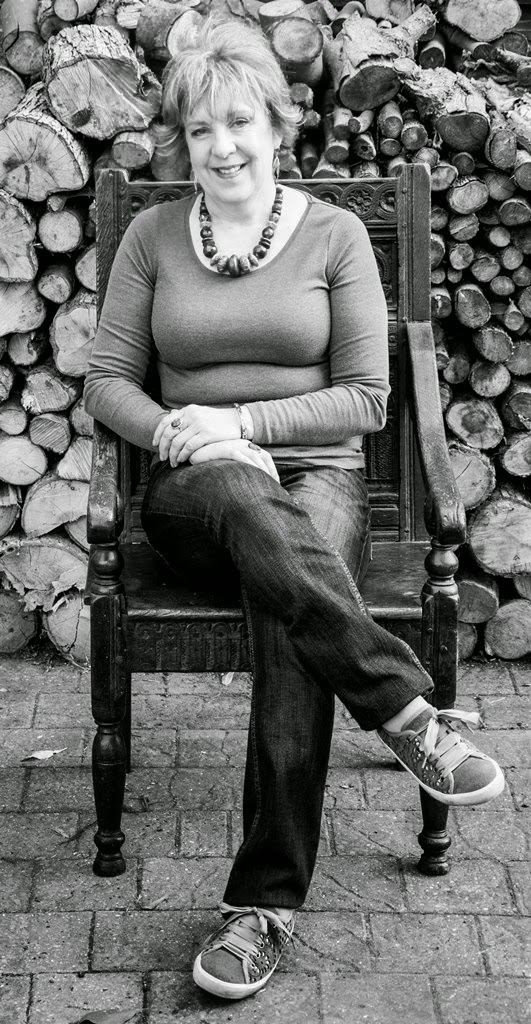 Into this month’s Cabinet of Curiosities, I want to put my chair (of uncertain date but most likley Elizabethan) because it is a curiosity in itself with a past steeped in mystery.


When I was a little girl I used to visit an elderly great-aunt about four times a year. She lived in the mill town of Radcliffe, Lancashire in a terraced house halfway up a steep hill. It was an end terrace, separated from its neighbour by a narrow alleyway that used to resonate with echoes when I stamped on the flagstones and shouted. Entering through the front door into the hallway I always remember the varnished wood electric meter box, and standing beside it a darkly gleaming old oak chair that just fitted into the space at the bottom of the stairs. Great aunt Elizabeth was meticulous about waxing and polishing the chair, and I was always fascinated by its intricate carving. However, as a little girl I never thought any more about it, it was just auntie’s old chair, and another piece of furniture. My lust at that time was all for the cuckoo clock in her sitting room. 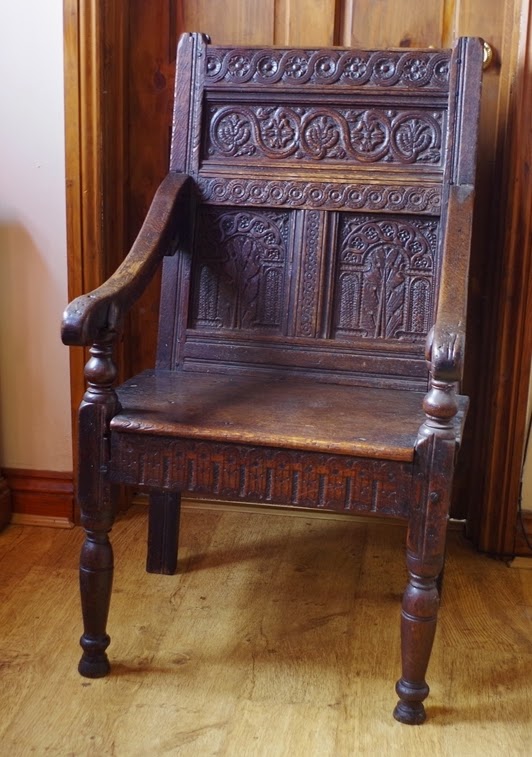 However, as I became an older teenager and entered my 20s, my interest in all things historical had begun to spark and I became curious about the chair. I think we struck up a conversation about it after Auntie grumbled about having to keep polishing it. She was much older now and her arthritis made it difficult to bend and her eyesight had deteriorated,  hence her hinting about preparing to pass it on.

Auntie (born in 1901) told me that the family story went that her great-grandfather had rescued it from a church during a period of refurbishment. The chair had been thrown out because it was badly broken. Said ancestor being of a waste not want not mentality brought it home and repaired it - rather crudely it has to be said. Round the back of the chair are some screwed in iron plates that show his fixings. The same with the seat which is screwed on firmly but rather brutally. The top of the chair shows holes for either finials or a decorative top but these are long gone. 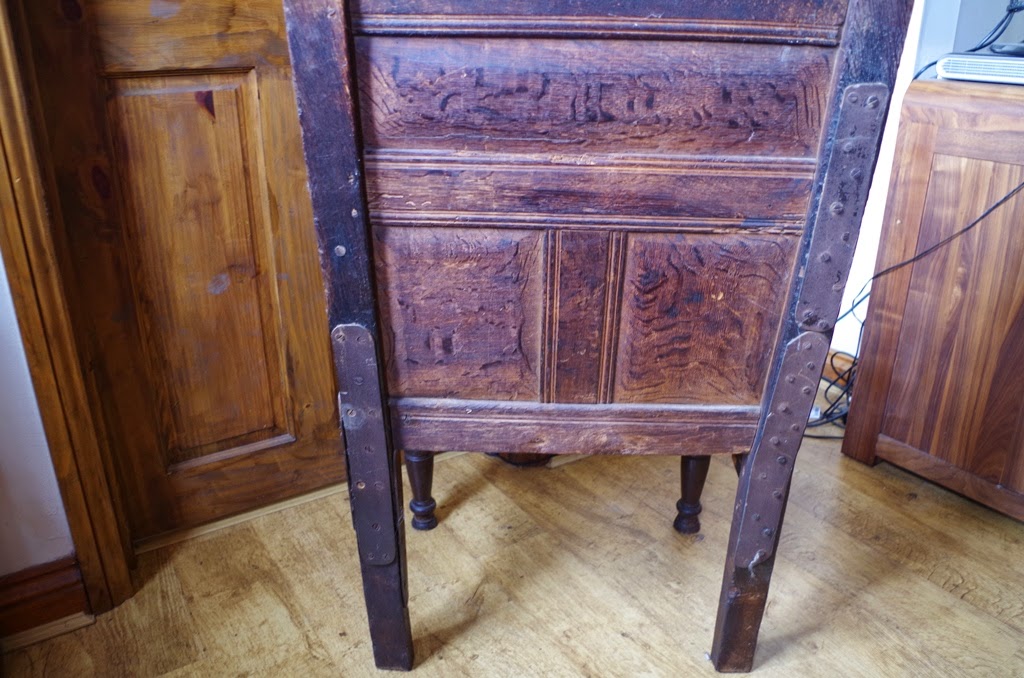 The chair is beautifully carved, and where my great, great-great-grandfather’s early Victorian vandalism hasn’t run, one can make out screws made out of wood. We’ve never had the chair looked at by an expert, but from trawling online and some domestic researches, it would seem that what we have is a chair of the Elizabethan period or just perhaps early Jacobean. When my ancestor came to rescue it in the 19th century, it was of an age where it wasn’t particularly treasured antique, but rather a piece of junk. So, rough and ready repairs or not, my great, great-grandfather Sykes rescued the chair for posterity. 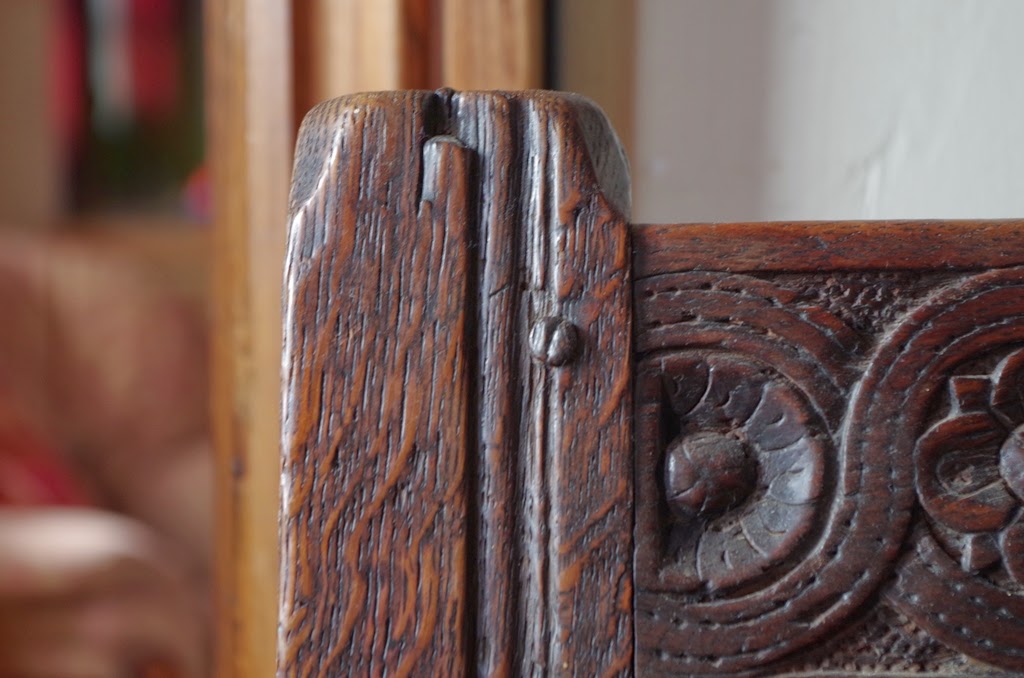 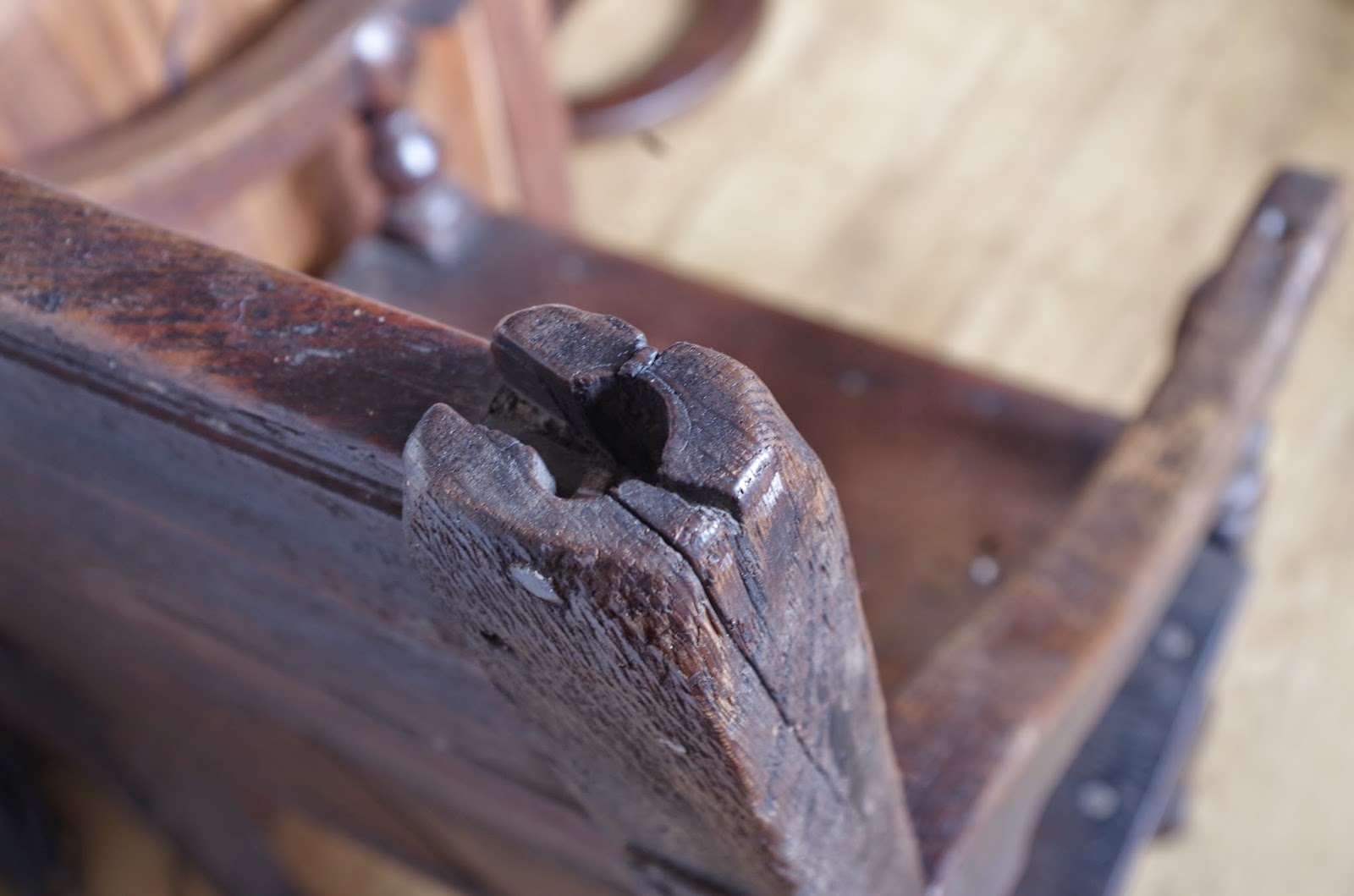 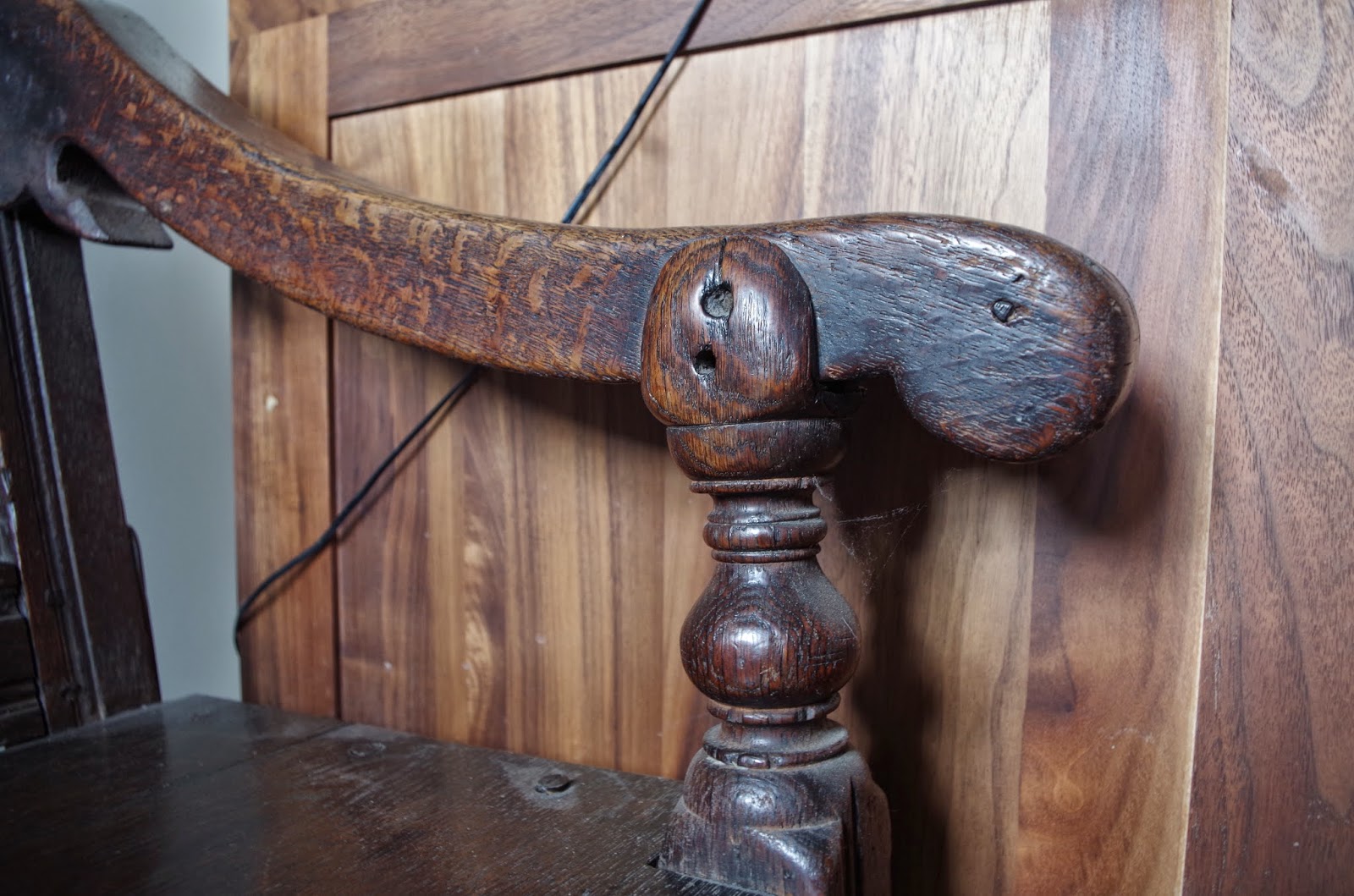 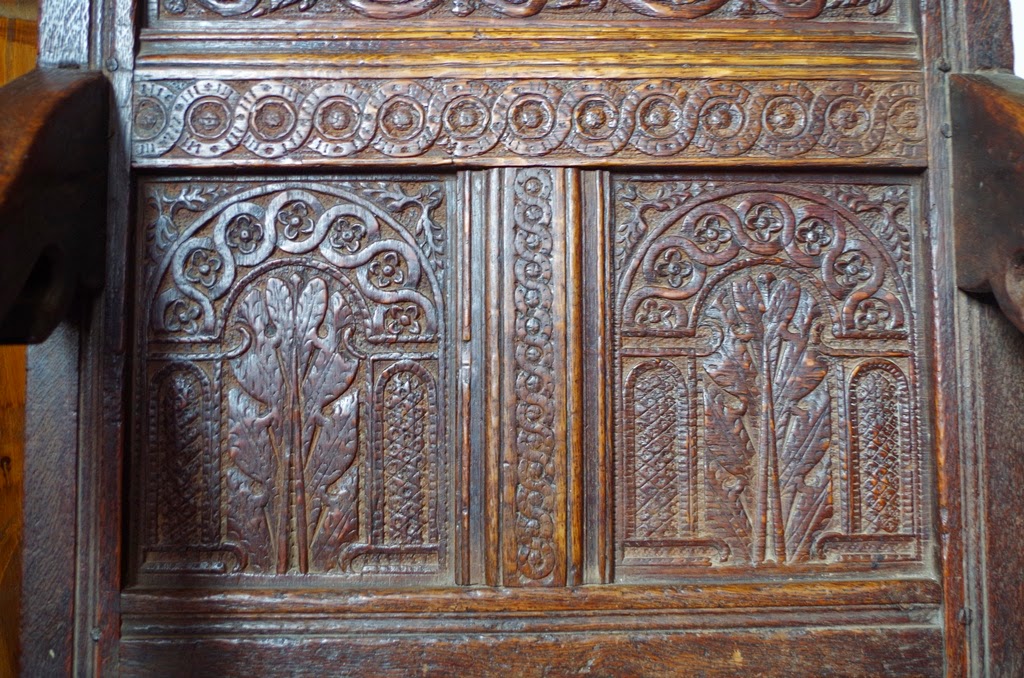 I have tried to work out which church it came from. Sadly my great-aunt has passed away and also my grandmother her sister. My father in his 80s, knows only as much as I do. We think that the chair may have come from the church of St Mary and St Bartholomew parish church of Radcliffe, because the other churches within walking distance of my aunt’s house are 19th-century and without the history to have housed such an item of furniture. Who sat in it? For what purpose was it used?  I don’t know, but it’s endlessly fascinating to imagine.  In my turn I shall pass it on to my eldest son and  it will go to his children after that.  In the meantime, I intend to find out more about the chair if I can and add knowledge to curiosity!
Posted by Elizabeth Chadwick at 00:01

It's lovely, and the repairs give it extra character! We have a big oak chest that would sit alongside it very well, but my husband's grandparents are said to have bought it in the 30s, so we don't know its history.

What a splendid chair. I rather like your great-great's repairs to it. As you say, it adds character. It would be a coup to find out its history.

Splendid is the right word - thank goodness for your ancestor!

I love your fascinating chair. There is so much history in it. Your should show it to an expert to discover something of its history. Value is immaterial but if only it could talk....!

Lovely chair. Yes, if only it could talk you'd get to the *bottom* of it!

I am in Lust Elizabeth, Just up my street, love the history and the repair, it adds to its charm. !

how wonderful are the odd things left saved by previous generations! We have a pedestal pre 1800, and a few other ornaments left from when my grandfather had to leave France in 1937 ish for the UK, we had more later and one lot was a dining room set of chairs and table and a side dresser, the sale of both bought my grandmother a house in the 1960's. I am in awe of your chair, what a great history. Thank you for sharing.

How wonderful! Both as a lovely piece of furnture and to have something with that family history as well as it's more mysterious previous history.