A few months ago I was on about the great 19th century cad, Henry Cust, who lived high on the hog, and is said to have left descendants in cradles all over upper-class England.  Well, it turns out that he was a mere amateur. I have just stumbled across the Master, who died in 1861, the year Cust was born. Step forward Richard Temple-Nugent-Brydges-Chandos-Grenville, otherwise known as the Second Duke of Buckingham and Chandos, born into a life of wealth and promise in 1797.


Before inheriting his dukedom in 1839, he held a variety of titles, was MP for Buckinghamshire, was Briefly, in Peel’s second administration, Lord Privy Seal, and was awarded the Order of the Garter.


He was a butt of the cartoonists for his politics:

Yet Richard (as we will call him for the sake of brevity) spent a great deal of time abroad, mainly collecting art treasures for his grand houses in London and elsewhere, notably the fabulous palace he inherited at Stowe.


By a chain of family marriages through the 18th century, and even before 1819, when he took as his own bride a Scottish heiress (Lady Mary Campbell, daughter of the Earl of Breadalbane) Richard was related to almost everyone who was anyone, including royalty back to the Plantagenets and, in the world of politics,the Pitt and Gladstone families. None of the links (even to the earlier Dukes of Buckingham and to the first Chandos dukes) was exceptionally strong, but they were very many. Richard had his elaborate lineage depicted in this grand armorial banner showing 719 quarterings of the dynasty. 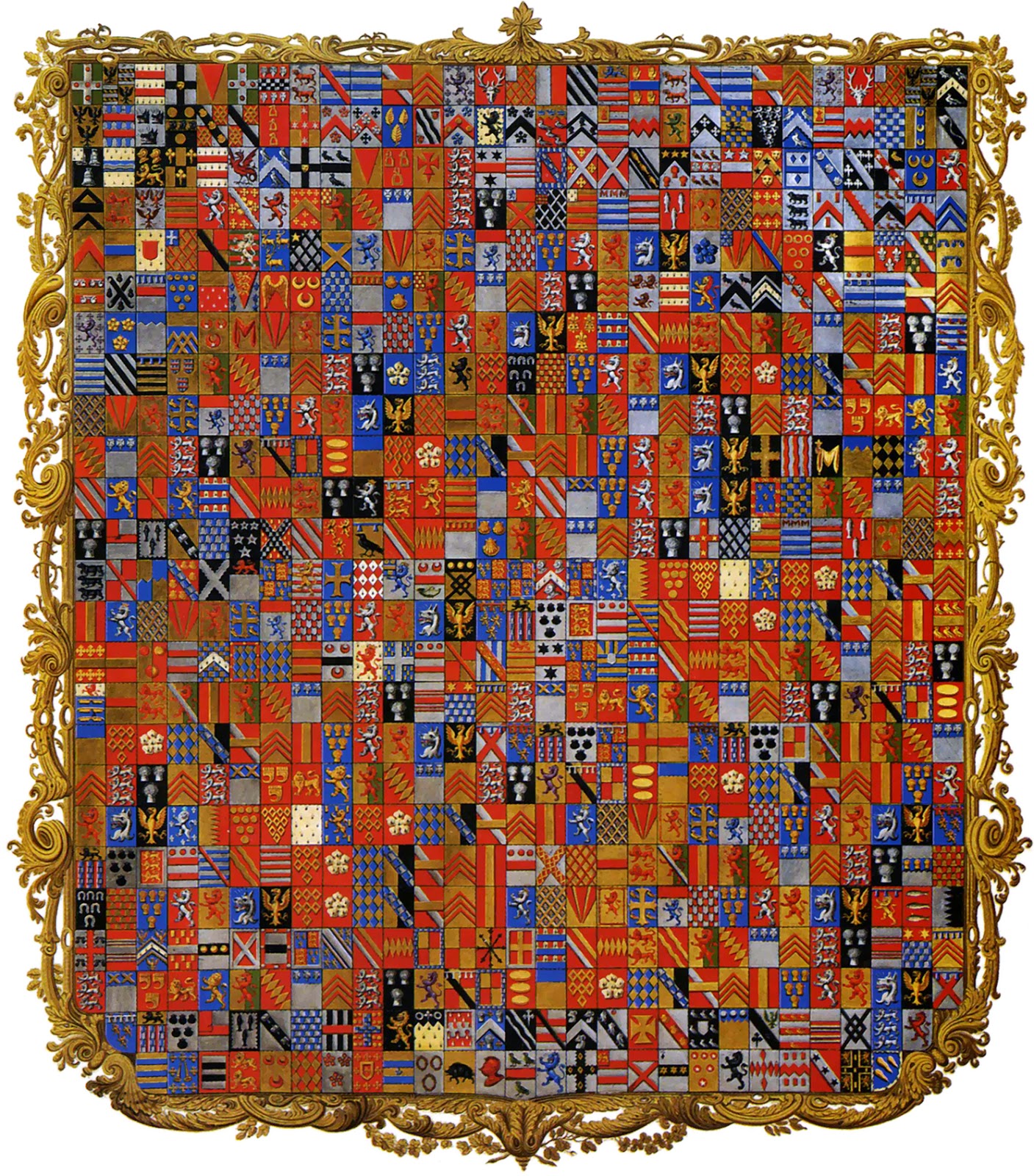 His lifestyle was lavish, and founded on a talent for persuading people to lend him money.  The trouble was that he was very bad at paying it back, and the interest mounted up.

It was no help when Queen Victoria and Prince Albert came to stay at Stowe for several days in 1845, running up yet more bills.

By the 1840s, the Duke was in serious financial trouble, and In 1848 he found himself having to sell off the contents of Stowe House in one of the greatest auctions ever seen. 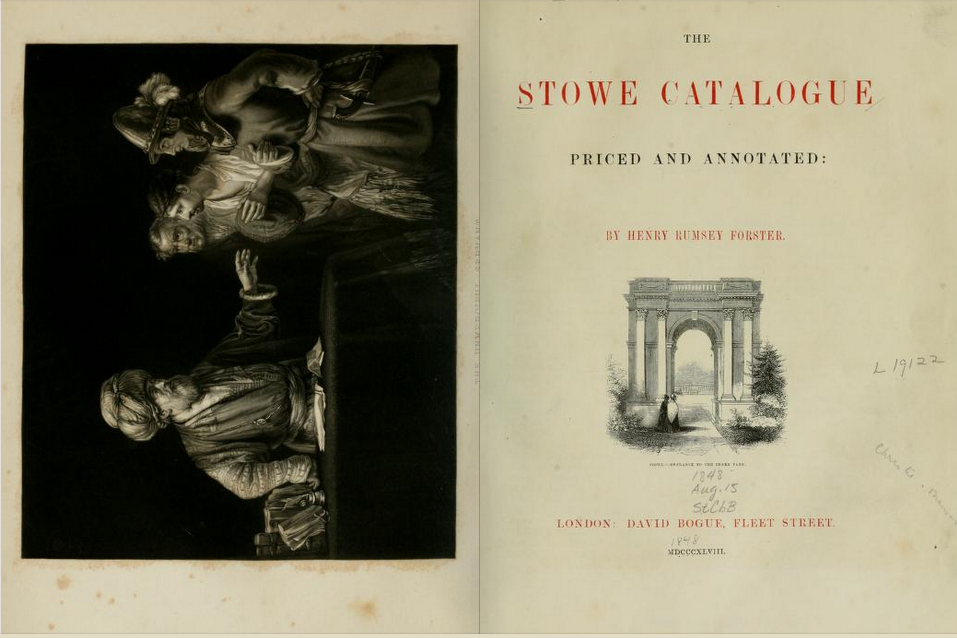 The auction took twenty-nine days between August and October 1848, and raised £75, 562 4s 6d. - a fabulous sum at the time, but a mere dent in his debts of more than a million pounds - perhaps a billion in today’s money. 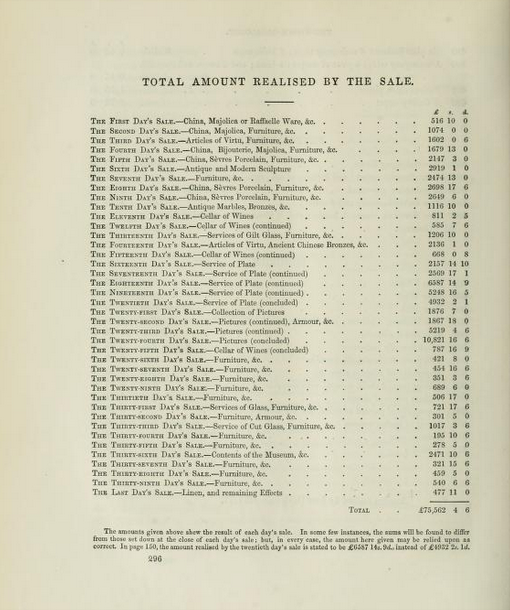 The editor of the (best-selling) catalogue, Henry Rumsey Forster, wrote an introduction that captured the glee felt by many of his contemporaries at Richard’s downfall:

The desecration to which the ancestral halls of the Duke of Buckingham have been subjected, has been regarded almost as a national disgrace; and Rumour has, accordingly been busy in assigning causes for the event, and denouncing the imprudence which is presumed to have occasioned it...Yet, if all the imputations which have been so freely indulged in were well founded, it cannot be denied that the penalty has been, at least, adequate to the offence.  The “household gods’"of the ancestral home of the Dukes of Buckingham and Chandos have been shivered to fragments, which can never again be reunited.”

The wonderful paintings, marbles, furniture, tapestries and china are indeed scattered across public and private collections today, though the twenty-one thousand bottles of wine have probably been drunk by now. The armorial banner, which had cost Richard £400, was sold for thirty-two, and ended up decorating the lobby of a hotel in Tunbridge Wells. Forster's edited catalogue, with details of who had bought what, and for how much (or how little) was a physical emblem of disgrace for the whole Grenville family.
But worse was to come.  And once again it was all Richard’s fault. Society gradually became aware that after thirty years of marriage he was being publicly imprudent with a woman called Henrietta Parratt, the middle-aged wife of one of the Clerks to the House of Lords. The couple were spotted by reporters riding around in a cab with no apparent destination. Edward Parratt was not prepared to put up with humiliation by ‘a pathetic empty-headed woman who had been swept off her feet by the attention of a great nobleman’, and everybody knew it.

On Sunday 7th January 1849, the young Benjamin Disraeli wrote to his wife after an exhilarating conversation in Brighton with the exiled Austrian leader, Metternich.


Disraeli was after Metternich's endorsement for his campaign for the Tory party leadership, but the two also talked at length about the state of European affairs. Disraeli ended his letter with a reflection on the Duke’s:

The Duke of Buck’s female case is going on, I hear; the husband being injured, brokenhearted, disconsolate, alas, determined to get rid of his wife, now the Duke is ruined.  What a vexatious climax to his catastrophes.

London was electrified by the scandal. Edward Parratt sued the Duke for ‘Criminal Conversation’ with his wife.  He won the case, and was awarded £2,000 in costs and damages, along with a divorce.  But Richard’s charm was still working.  Fellow members of the Carlton Club paid the bill. Henrietta Parratt was denied contact with her children and fled to Paris to await her lover.  Of course, he never turned up.

Meanwhile the Duchess had had enough. In early 1850, she was awarded a divorce in the Consistory Court.  She spent the next ten years fighting legal battles to get back the money her father had settled on her when she married.  There was no hope, and she eventually went mad.
The woman who had once entertained the Queen was completely cut out of polite society. I could find no surviving pictures of her.

The 2nd Duke of Buckingham and Chandos died in 1861, a bankrupt living at the Great Western Hotel in Paddington.  He had spent his last days writing about his earlier travels in search of artistic treasures. A year later, his former wife was dead too. It was all over.

The Times had summed up the public view of Richard Temple-Nugent-Brydges-Chandos-Grenville on Monday, August 14, 1848.  As the fabulous auction approached, it described him as

“a man of the highest rank, and of a property not unequal to his rank, who has flung away all by extravagance and folly, and reduced his honour to the tinsel of a pauper and the baubles of a fool”.

An example of our officer class...

This is an website about uk.
Tunbridge town centre cabs