GUESS WHO - or the debate over the Radegonde mural in Chinon. By Elizabeth Chadwick 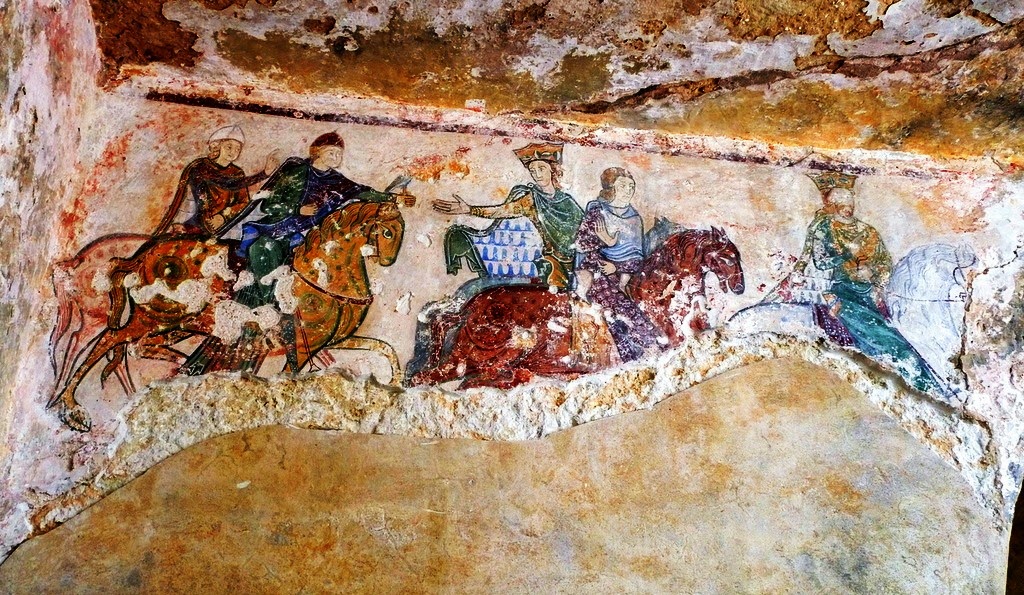 In 1964 an interesting an intriguing discovery was made at an ancient chapel in Chinon dedicated to St Radegonde. The story goes that a piece of plaster fell off the wall and revealed a mural of five mediaeval figures - two of them crowned - riding out to hunt.  The discovery having been made in the Angevin heartland and the figures appearing to date to the 12th century caused a stir among historians and art historians.  The original finder, Albert Heron, thought that the figures represented among others King John, his wife Isabelle of Angouleme, and her second husband Hugh of  Lusignan. Debate as to the identity of the riders has continued ever since, with the most popular vote (to judge by biographical book covers and photographs in said books) identifying the lead crowned figure as Henry II and the middle one as his wife Eleanor of Aquitaine with sundry other family personages suggested for those surrounding them.
Ever since setting eyes on this mural, I have  found it curious that so many people believe the middle crown figure to be Eleanor of Aquitaine, even while I understand their reasoning. She is always linked with her husband Henry II and they are larger-than-life personalities who automatically take precedence in people's minds. St Radegonde was an important Saint in the territories held by Eleanor of Aquitaine, so the reasoning goes that it must be her. But without actual names written identifying the figures, it can only be guesswork - and perhaps flawed guesswork at that.
How do we know the lead figure is Henry II?  We don't; it's another assumption, but the circumstantial evidence points that way because we know from contemporary evidence that Henry II was red haired,  The mural is at Chinon which is solidly in his territory and the figures clearly date in terms of the style of their clothing to the late 12th century.  Since Richard the Lion heart was also a redhead, it might be argued he is also a candidate for the rider on the white horse.
Alison Weir thoroughly debates the issue in her biography of Eleanor of Aquitaine. She believes the lead character is Richard because 'Richard's effigy at Fontevraud shows him bearded, whilst Henry II's is clean-shaven. Given the special relationship between Richard and his mother, it follows that the crowned woman is Eleanor herself.'  I beg to differ, While Henry's effigy at Fontevraud does indeed show him beardless, Weir has rather ignored the detail that Gerald of Wales portrayed Henry in life as bearded - see illustration below, and drawn either from life or at the least from Gerald's living memory of a man he knew well by sight.
There may be many reasons for Henry's non-beard at Fontevraud. Perhaps to show how dignity and power had been stripped from him in death - a sort of emasculation, It's interesting to note that while Richard I's tomb effigy at Fontevraud is fully bearded (a black beard strangely enough, probably the result of later restoration).

So, having dealt with the matter of the beards, let's assume that the lead figure is indeed Henry II. Who are the four figures following him?  Weir believes like many others that the crowned middle figure is Eleanor and that the young woman riding at her side may be either Berengaria of Navarre who was Richard's wife or Eleanor and Henry's daughter Joanna, Countess of Toulouse. She also believes that the two young men behind Eleanor are her grandson Otto of Brunswick, and possibly Arthur of Brittany, or John. She thinks the mural may have been painted in 1196 when Eleanor was in residence at Fontevraud.
A couple of ideas she refutes are the opinions of historian and Israeli professor Nurith Kenaan-Keder, who said in an article dated to 1998 that the mural either depicts King John with Eleanor of Aquitaine and Isabel of Angouleme or else that it is Eleanor being led into captivity by Henry II in 1173/74 and being accompanied by her daughter Joanna and two of her sons including Richard to whom she is giving a falcon as a symbol of passing on the ducal power. I agree with Alison Weir that neither of these theories stands up to scrutiny.  A mural of Eleanor being led into captivity would hardly be a subject for the wall of this chapel.
Studying the mural myself and being au fait with 12th century costume, it seemed to me that all the figures in this mural are male.  Only men pin their cloaks high on the right-hand side. No woman ever does.  I have been collecting manuscript images of the cloak fastenings of men and women of the 12th century for some time and I have not found a single woman with a right hand shoulder pin. It doesn't happen. Nada, nope, no. They just don't dress like that.
So the figure that is sometimes mentioned as Joanna, sometimes as Isabel of Angouleme, isn't female at all. And the crowned figure in the centre isn't female either. But he is still an important personage. He has a wonderful fur-lined cloak of the kind only seen on high nobility, and he has his crown the same as the lead figure, although I have been reliably informed by historian Henk T'Jong (who is a mediaeval clothing expert and agrees with me that these are all men)  that this headgear is in fact  representative of jewelled fur hats - still very high status!
So if we rejig our ideas of who these figures might be, it  becomes a lot less messy. The foremost figure on his fine white horse is Henry II and he is leading out his four legitimate sons on a hunt. There's his eldest son the Young King wearing the other jewelled hat and flashing his fur-lined cloak to further emphasise his stylishness and status. He was crowned in 1170 during Henry's own lifetime to absolutely secure the succession. So you have two Kings in the picture. The slighter, more youthful figure at young Henry's side is his younger brother John. There's around 11 years difference between them. When their father had suffered a serious illness in the early 1170s, he charged his eldest son with taking John under his wing and caring for him should the worst come to the worst which young Henry had agreed to do. So this may well be symbolic of that bond. The two figures following behind are Henry II's second and third sons Richard Count of Poitou and Geoffrey Count of Brittany. Those little caps with the stalks that they are wearing, are very indicative of young 12th century high status men about town. The Falcon itself on 'Richard's' wrist may or may not be symbolic of an act of homage.
I've recently read  Inventing Eleanor: The Mediaeval and Post-Mediaeval Image of Eleanor of Aquitaine by Michael R. Evans published by Bloomsbury academic. He has something very interesting to say about the Chinon mural. Leading art historian Ursula Nielgen wrote a detailed study on the mural in 2004:  'Les Plantagenets et la chapelle de Sainte Radegonde de Chinon: un image en debat.'  Nielgen believes that all five figures are men and that there is nothing in the hairstyles or figures of the supposed 'women' that differentiate them from the 'male' figures. She postulates a date the rebellion of 1173/4 when the family had been reconciled all except for Eleanor. That makes total sense to me given what I know of Henry's personality. I have seen it said that the Eleanor figure has longer hair, but I have seen plenty of examples of men with that length of hair, and the leading Henry figure is not exactly short of a lock or two in that area is he,  so that argument doesn't hold water.
My conclusion is that these figures are male, Eleanor of Aquitaine has absolutely nothing to do with it. They depict Henry II and his four sons, not only riding out to the hunt, but riding out into the future, the pater familias leading his heirs.

Mural photographs courtesy of John Phillips.
Elizabeth Chadwick is working on a trilogy of novels about Eleanor of Aquitaine. The Summer Queen and The Winter Crown have been published and she is working on The Autumn Throne.

so interesting thank you, and the same week I read this, http://caithnessroots.co.uk/2014/10/22/the-man-with-the-top-hat/ which while more modern has the same questions to ask.

Yes, I have heard this theory before, that all these figures are male. Most interesting!

Fascinating! Your theory makes total sense. They look male to me, too.

Totally fascinating. The use of the image to illustrate Alienor has become reified over the past decade by constant re-use, especially on the Internet. Another image used frequently is taken from the Manesse Codex of 1304. A few years ago the French Post Office actually issued this as a stamp with "Alienor d'Aquitaine" written on it!

it is very unlikely, that a royal woman like Eleanor would have been depicted riding astride as a man. (I´m doing Research on the suject of womens ridng style for a Long time) Riding side saddle was the accepted way of riding for a christian women of high rank. The depiction of a woman riding side saddle was a proof of her high social rank and was used in manuscripts and for seals, especially in the 13th century.

So I agree: the riders all a men. The scene reminds to the "Jungherrensiegel" (seals) of the early 13th century. The heir was usually shown on horseback, carrying a hawk, while the father used the traditional eqestrian seal.